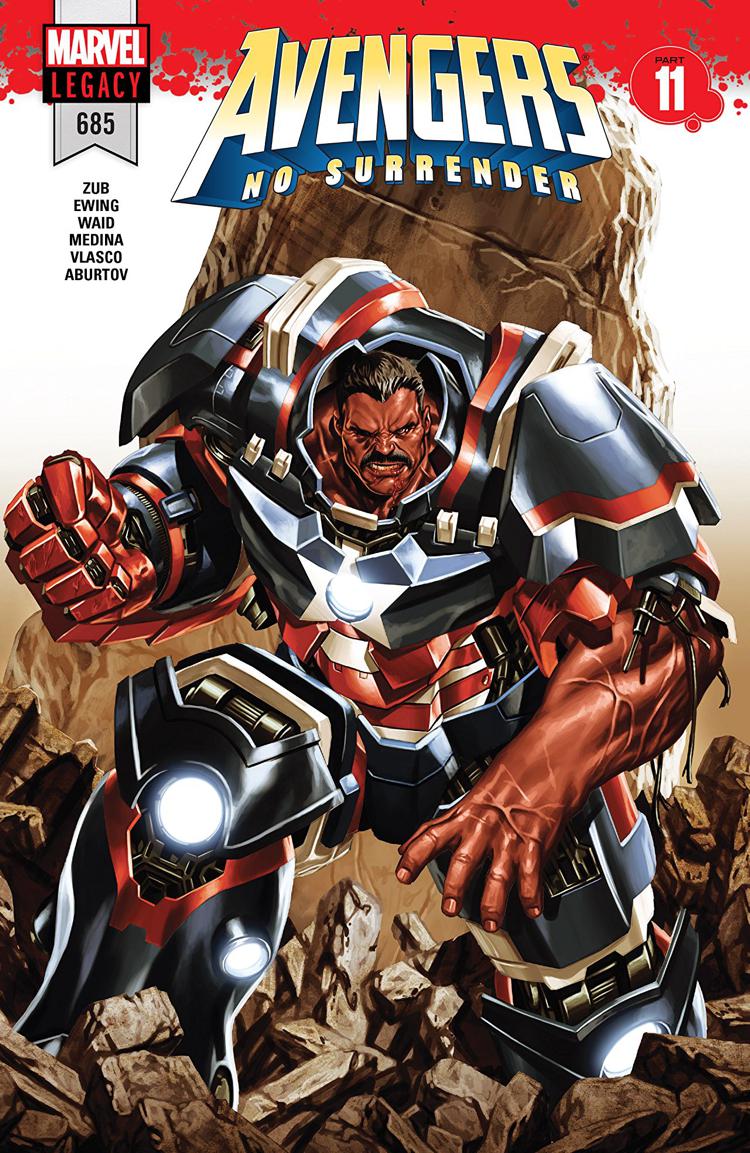 Breaking form with the first 10 installments of this arc, Chapter 11 of “No Surrender” opens without a narrator and continues to let the story speak for itself throughout the first half of Avengers #685. The entire issue is the Hulk putting a beatdown on everyone he crosses. The opening scene features red and green Hulks punching. A lot. And the rest of the issue throws all sorts of opponents at the Hulk.

Writers Jim Zub, Mark Waid, and Al Ewing leverage Voyager after the halfway mark to open up more about her past, drawing a comparison between the Hulk’s rampage and a planet in death throes. Voyager’s observations make for a strong point-of-view, but more importantly serve as either a distraction or a breather from the Green Goliath’s path of destruction.

As the center of attention and the catalyst of the action, Hulk receives twice as many panels as the leading Avenger. Since Hulk is in the adversary role this issue, he doesn’t get to claim the prize, which instead goes to the in-stasis-until-this-issue Vision. Too bad Vision is otherwise occupied by the tremendous, jaw-dropping action the writers have packed into Avengers #685.

Penciler Paco Medina, inker Juan Vlasco, colorist Jesus Aburtov, and letterer Cory Petit pack every panel of Avengers #685 with energy, action, and detail. The story flows wonderfully throughout the issue, with several occurrences of comic book action spilling from one panel to the next in classic style. Additionally, Medina displays a mastery of inset panels that is second to none and leveraged strongly used to amp up the rhythm of the story.

To assess the art, the end is really the best place to start. The final page is a splash and features two characters, both Avengers, both male, both strong. Medina’s characters are smashing and distinct, the epitome of what superhero comic book characters should look like. He used body type and body language as much as facial expressions to tell the story, which is amplified by Vlasco’s inks and Petit’s balloons. There’s a lot of story here, and each artist has honed their craft to maximize the impact of the tale. In panels that are barely one-sixth of the page in height, Petit slides in the word balloons, and you can almost hear the latex squeak of a real balloon as the dialog just fits.

Every panel in Avengers #685 – but that last page in particular – carries an insane amount of background detail, smart perspective, textures, hatching, depth, and gradient, all of which Vlasco either masterfully enhances. Seriously. Track down Vlasco’s Twitter feed and you can see just how much ink was put down.

And then the colors – Crayola used to use the word “brilliant” in their marketing, and that’s the only way to describe Aburtov’s work. Yes, he’s true to model, but he ratchets it all up an extra notch. Reds are unmistakably red, the Hulk as green as can be, and every other color is pure. Yes, there are gradients and filters, but the colors are brilliant, as colors should be in the Avengers. Aburtov’s choice to give Hulk’s eyes a radioactive glow is magnificent. But a lens flare in several panels may act as a hint for potential story developments. Or maybe it’s simply meant to look cool.

Avengers #685 continues to present some great work and this chapter takes “No Surrender” in a different direction. Yes, Challenger and Grandmaster are still playing their game, but this issue transcends that.