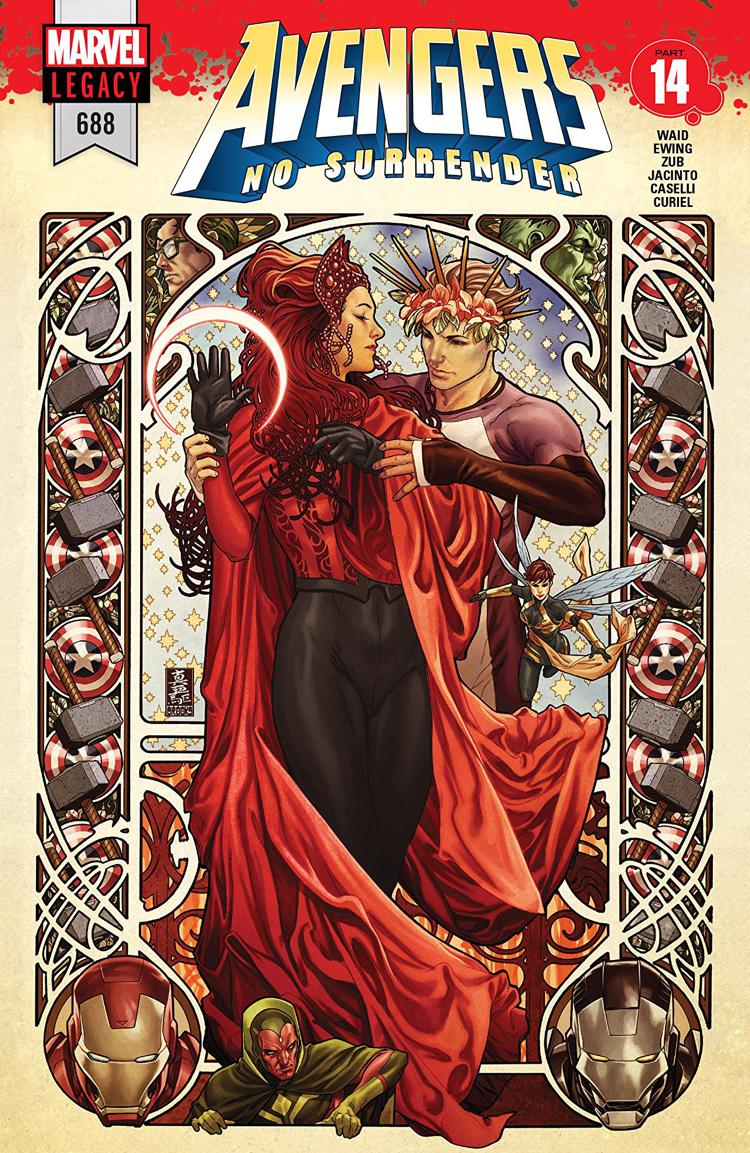 “I’ll be your Hulk for the evening.”

Roberto Da Costa loosens up his tie and rolls up his sleeves midway through Avengers #688 to help move “No Surrender” closer to its inevitable end. With two chapters remaining, writers Mark Waid, Al Ewing, and Jim Zub pull out the stops and send Quicksilver out to stop the beacon that has placed heroes and villains across the world in stasis.

The art in Avengers #688 looks like it was crafted by committee, with Kim Jacinto and Stefano Caselli splitting the chores, not necessarily in half, but certainly throughout the issue. The end result is a bumpy, unevenly drawn comic, but one that still works. The rougher spots fall on the fight between Challenger and Hulk, which is kind of the ideal spot to drop jittery, visceral art.

Other spots, like Quicksilver’s conversation with Scarlet Witch and Synapse, are smooth and polished, which, again, fits the scene. In that scene, however, (presumably) Caselli and colorist David Curiel treat Pietro’s hair inconsistently, to the point where I found it distracting. The close-up shots of the more personal points in the conversation omitted the black ink from Pietro’s hair in a move that emphasizes the silver, but is simply incongruent with the other twenty-five panels of Quicksilver in this issue.

I gave the quote of the issue to da Costa, but Quicksilver ran away (ha! Review pun!) with the No Surrender Most Panel Prize. In a rare move that has only been matched by one other character in the heretofore, Pietro Maximoff also claimed the point-of-view narration for this issue.

The art has a wide range of setting and character to transmit, and Jacinto and Caselli are up to the storytelling task, even if Avengers #688 has a sliver less polish than previous chapters of “No Surrender.” The writing trio make this one of the more wordy installments of the saga to date, and letterer Cory Petit tucks and tags everything in the best way possible. His choice to let the art breathe a bit more by hovering the word balloons out towards the edges of the emotional exchange between Emily, Pietro, and Wanda is a splendid choice, and it underscores the scene nicely, adding intimacy despite the grand scale of mayhem surrounding the trio.

Not that Mark Brooks’ work can be taken for granted, but I was so enthralled by the cover to Avengers #688 that I didn’t even notice it was missing the UPC and Digital Content slug until I finished reading the issue a second time and finally closed the book. On the back cover is the UPC and slug. And that’s it. Marvel gave Brooks run of the roost – as this cover truly deserved – and it is wonderful. Brooks has delivered fourteen magnificent masterpieces for this story (and a surprise variant or two) and this one is a stunner. The primary image is fancy and Nouveau-inspired, but the details and subtleties woven throughout the Nouveau lattice are amazing.

With two chapters to go, Avengers #688 gives readers an “Avengers Assemble!” moment that supercharges the remainder of this saga while promising even more Avengers awesomeness ahead.