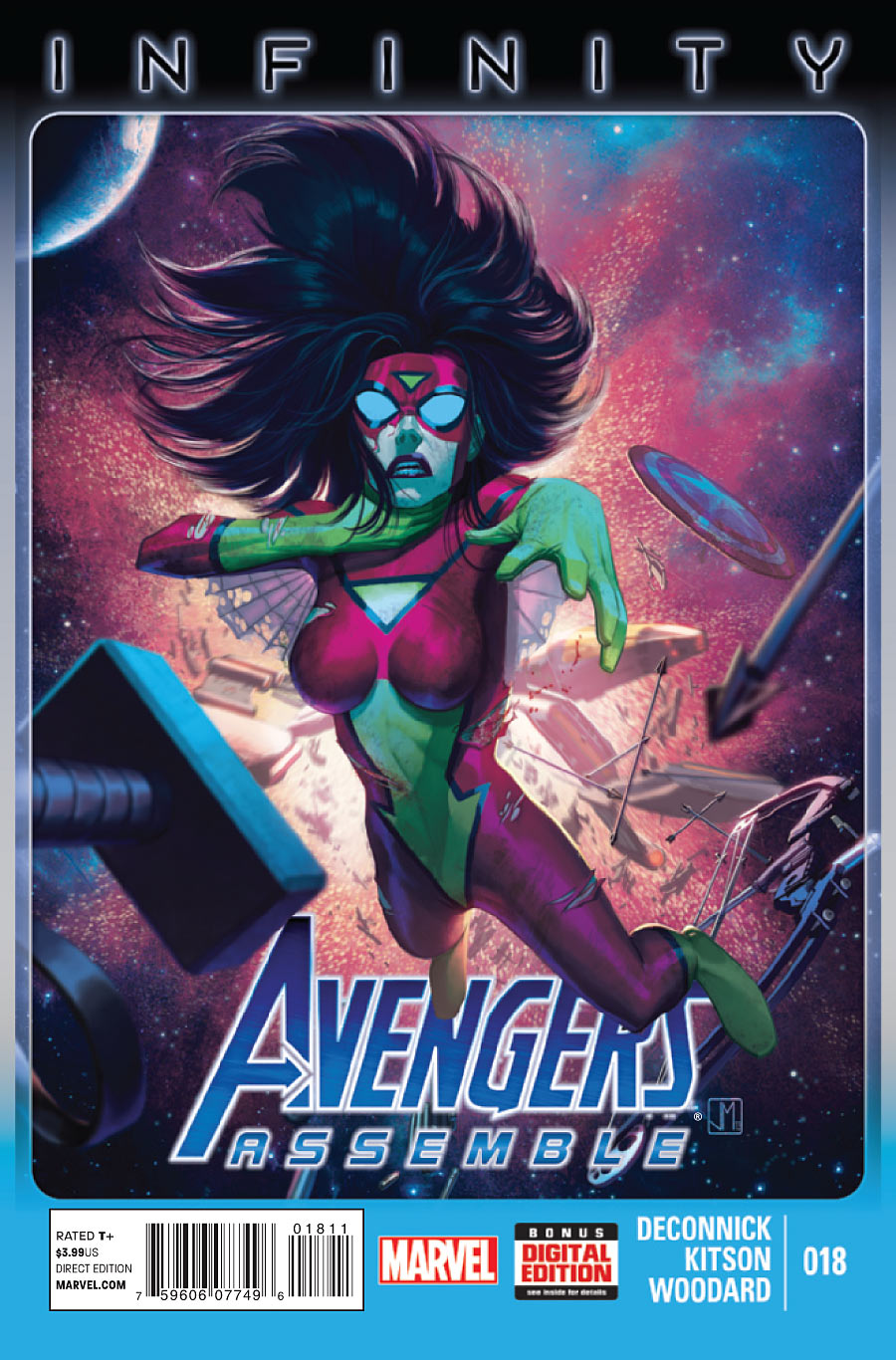 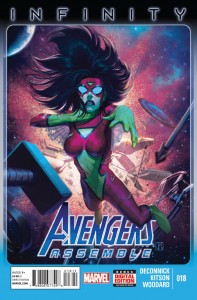 The combined might of a dozen armies from the Kree to the Skrull to the Avengers is engaging the Builders in deep space, but Jessica Drew makes it all about her. I didn’t expect such an in-depth character story from a mega-event tie-in issue. At the same time, the exhilarating space battle reminded me that there’s a war for creation at stake. This is a good issue if you enjoy drama and Hulk smashing robots, and a great issue if you love Spider-Woman.

Kelly Sue DeConnick mixes awkward moments and some ugly personal turmoil as Jessica Drew sets off to fight bad guys from before the existence of time with most of the Avengers. Despite the heart-attack-seriousness of the battle at hand, Jessica is distracted by a lot of her own baggage, some of it petty, and some of it heavy. There are a lot of little snacks for readers familiar with Spider-Woman’s recent past. If you’re not, DeConnick still delivers a clear picture of an Avenger who is off her game. She also choreographs a very big, very chaotic space fight. Infinity is my first experience with a Marvel Event so I was expecting to get lost in the gigantic cast and the impossibly huge setting, but I managed to hold my ground. It was fun to see major feats – like Hulk jumping into space to fight robots on the damaged hull of a spaceship – tossed around like candy.

Barry Kitson aces the task of drawing both those kinds of epic moments, with tons of detailed little ships and debris and aliens flying around, and the highly personal moments, of which there are many. He does as awesome a job conveying OH MY GOD THAT GIANT SHIP EXPLODED as he does Jessica’s guilt and shame as she learns Black Widow can overhear her talking to herself. Bonus for members of the Carol Corps: we have yet another iteration of Carol Danvers’ ever-changing hairstyle. (My personal head-canon is that Carol’s hair is sentient, like her cat or the plant that made up J’onn J’onzz’s outfit in the pre-N52 DC Universe.) Nolan Woodard’s colors bring the whole spectacle to life, and he manages to deliver clearly colorful superheroes without upsetting the somewhat dire tone of the book.

I had two complaints with this issue, one relatively minor, the other possibly a matter of opinion. The first: the space armor. I know it’s comics, and it’s probably designed like that so we can see the costumes of the heroes inside, but let’s be clear: you would explode in the vacuum of space if you wore that space armor. My second issue was with the early pages that focused on Captain Marvel. This book is the first time we’ve had any clear reference to the aftermath of the events of The Enemy Within, and it felt a little like stealing the thunder from Carol’s solo book. Now, DeConnick does write both of them, so maybe I’ll change my mind after I read Captain Marvel next week. I still loved seeing the results addressed from Jessica’s perspective, because I felt it as someone who also cares deeply about Carol.

Overall, the book is a great mix of character work and action, which I’ve come to expect from DeConnick, and it has a clear connection to the events of Infinity #1. An enjoyable issue, and a solid tie-in.