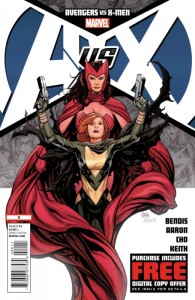 And so it begins….Avengers Vs. X-Men #0 is not part of the ‘main event’ but rather a little appetizer to whet your appetite and introduce (or perhaps re-introduce) readers to two key players in this battle royale: the Scarlet Witch and Hope. It was a fantastic choice to have Bendis tell the Scarlet Witch tale as it can be argued that this conflict has been coming since his epic House of M event. He writes her brilliantly, taking on her unique and awkward situation head on. Her character alone is worthy of an Avengers Vs. X-Men battle, but when you bring in the second piece of this issue, you know a huge war is on the horizon. The second story in this book is Jason Aaron’s take on Hope, a character he explores amazingly well considering the number of pages he is working with. Hope’s journey has been building to this conflict for literally years and Aaron does an excellent job escalating the tension surrounding her character. We know the Phoenix is coming, we figure it’s coming for Hope, we know it didn’t go so well last time and we know what happens next will rock the Marvel Universe. Moreso than the entire Avengers: X-Sanction mini-series, the ramifications for Hope herself are summed up with precision by Jason Aaron and I look forward to reading what he and the other architects have in store for readers with Avengers Vs. X-Men #1.

On the art side of the coin Frank Cho is brilliant. This series needed to be kicked off by a heavyweight artist and he delivered on all fronts. The panel designs are excellent and his splash pages are full of the kind of widescreen action this title deserves. Both of these leading women are conveyed with complexities that only a great artist can provide: they are strong, vulnerable and both unsure of what the future holds. Marvel editorial made the right choice with Cho for this lead-in issue as his art only adds to the anticipation of what is coming and the final panel of the issue is as ominous as it gets. Cho’s work is always solid, and the art in this issue is as good as you will find in a superhero comic anywhere.