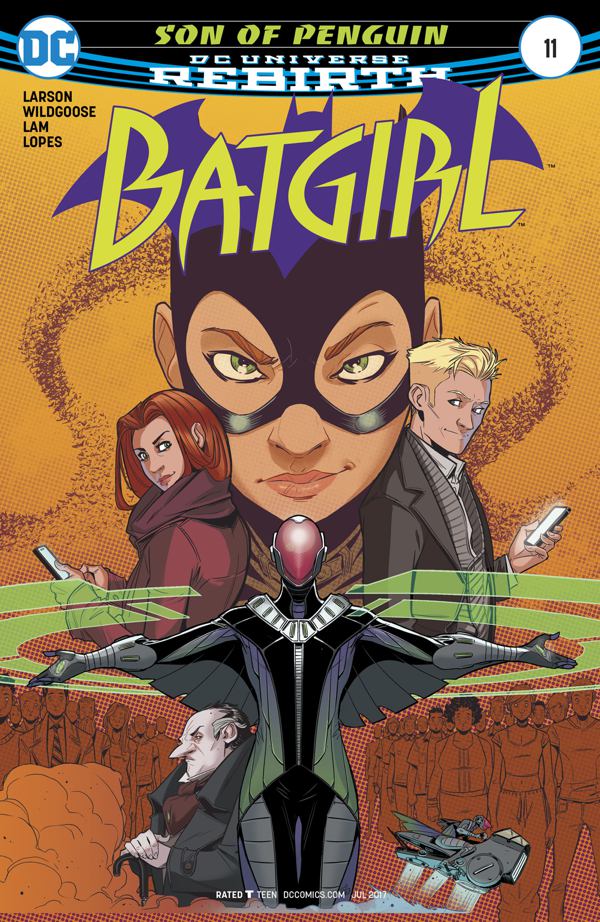 Ethan Cobblepot’s plans are revealed and Batgirl has to figure out how to stop him from mind controlling the entirety of Burnside.

When Blacksun breaks into the Penguin’s office, he’s accompanied by a mind controlled flash mob, under the guise of throwing a retirement party for the Penguin. The flash mob is funny, and breaks some of the tension, but it also highlights how much power Blacksun has, mind controlling an entire group of people into doing what he wants.

One of the things I’ve really loved about Larson’s run on Batgirl is the use of thought bubbles. I love that we get insight into what Barbara is thinking, and the thought bubbles take the place of narration that’s typically seen in comics. It’s a different approach, and one that makes the title more unique and stand out. I love the peeks we get into Barbara’s thought process as she’s trying to figure out how to take down Blacksun, without relying on her to narrate the entire issue.

Barbara figures out that Blacksun’s mind controlling requires WiFi to work. She realizes that he would be unable to send out the mind control signals if he was lured to the park, which cuts off the WiFi signals. Barbara uses her eidetic memory and tech knowledge to outsmart Blacksun. Larson has done a great job of highlighting Barbara’s intelligence and quick mind, using that as her strength to defeat her enemies. Barbara is not only able to figure out how to shut down Blacksun’s tech, but also uses her personal knowledge of Ethan Cobblepot and his jealousy to trick him to going to the park in the first place. Larson’s Barbara is able to read and understand people extremely well, which she uses to her advantage when taking down her enemies.

Once at the park and cut off from WiFi, Blacksun is unable to use mind control and Batgirl is easily able to take him down, with one perfectly aimed kick. Blacksun is so cocky and overconfident in his own abilities that he never considered the possibility that he might lose. He didn’t have any way to defend himself in the event that his tech failed him because he was so sure that it never would, simply because he designed it. Blacksun is nothing without his technology, and Larson makes it really clear just how confident and self-absorbed Blacksun is, culminating in his quick takedown once his tech is shut off.

The re-warming party was a really nice scene, and it’s always great to see Barbara’s friends Frankie, Alysia, and Jo. They’re fantastic characters and friends for Barbara, and I hope we get to see more of them moving forward, as supporting characters of Barbara and Batgirl, but with their own storylines separate from Barbara as well.

Oswald Cobblepot has his son removed from the hospital, where he’s recovering from the burns he received when his tech shorted out. This was a great way to end the issue, and makes it clear that this isn’t the last we’ve seen of Blacksun. I like the idea that Ethan Cobblepot might be a recurring villain of Batgirl’s, and with his tech knowledge and confidence, he won’t be as easy to beat the next time.

The layouts in this issue are incredible! There’s a mix of larger panels, with smaller panels to break them up. The smaller panels are focused on a particular object – a grappling gun, Barbara’s face, a kick or punch – and add to the motion and feelings of excitement and anticipation that accompanies the action. The background colors of these smaller panels are one color – a blue background when Barbara is holding the gun, a yellow background when Blacksun gives the order to kill the Penguin – which helps the reader to focus on the person or object in the panel. The background colors are also in contrast to the person or object in focus, making them further stand out against the background.

When Barbara rescues the Penguin from the flash mob at the start of the issue, I really like that Wildgoose included Barbara’s position in multiple places as she swings on the grappling hook. This adds to the motion and fluidity of the scene, and helps the reader to track how Barbara is able to swing from one side of the room to the other, scooping up the Penguin along the way.

Blacksun’s costume design is incredible. He has one eye covered for his tech that mirrors the monocle that his father typically wears. Ethan Cobblepot doesn’t have a good relationship with his father, so this could be seen as a mockery of his father’s typical look. To me, it seems more like an homage or recognition of who his father is, and almost feels like he may be trying to impress the Penguin or seek his approval, even while trying to destroy him. His helmet when he’s on the motorcycle is in the shape of a beak, which fits his bird theme, but also looks exactly like the Penguin’s large nose.

Batgirl’s costume is always the brightest colors in every panel she appears in. Lopes assures that Batgirl stands out and is always easily recognizable. I particularly like the panel where the mob of mind controlled people converge on Barbara. The coloring is brighter around Barbara, and darker towards the edges of the panel, appearing as though a spotlight is on her.

Overall, I really enjoyed this issue. It was a great conclusion to the Ethan Cobblepot/Blacksun arc, and left the possibility of seeing him return at a later point. Barbara uses her memory and knowledge to outsmart Blacksun, and I really appreciate that Barbara’s intelligence is constantly emphasized as her greatest strength.