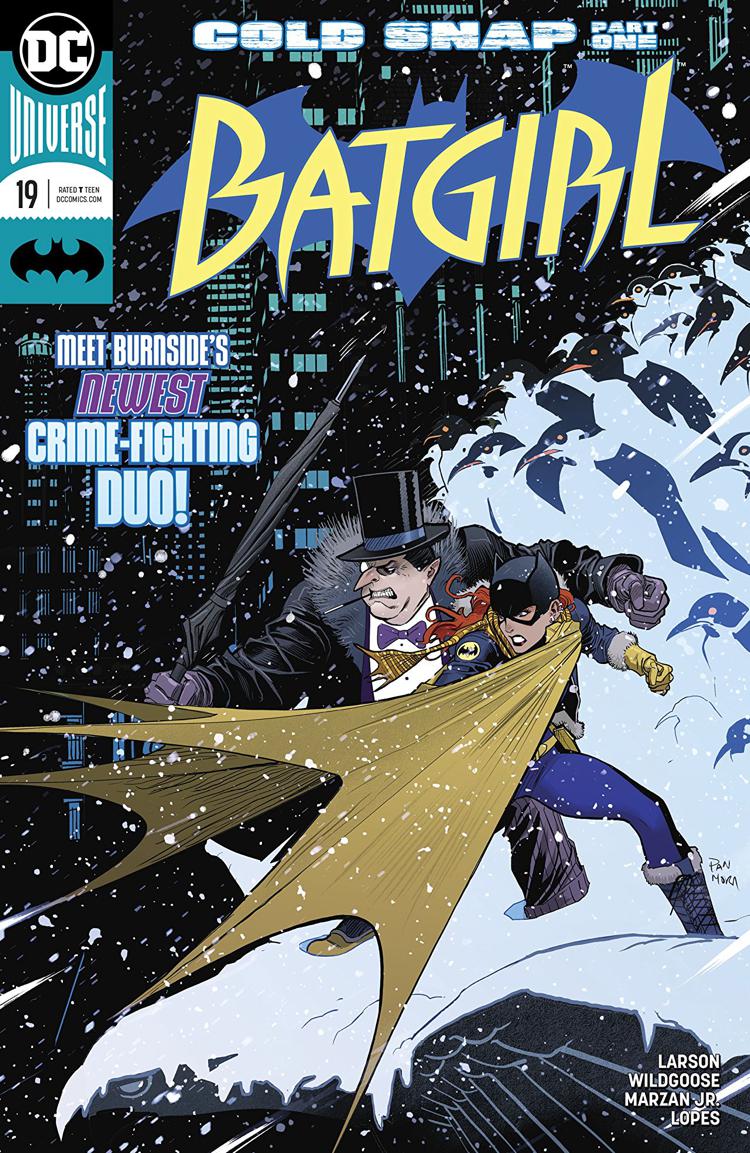 In “Cold Snap, Part One”, Larson begins a new story arc with issue 19 that may introduce a chilling new problem for the Batgirl of Burnside but between Larson’s dialogue and Wildgoose’s pencils, Babs brings plenty warmth in this thrilling book.

It’s always exciting when Batgirl has to tangle with a familiar face from Gotham City and Larson’s part one of this arc wonderfully sets up the story: when an unexplainable blizzard comes to Burnside and right along with it comes The Penguin, Batgirl can’t help but get a chilling sense something is wrong and begins to investigate.

Hope Larson’s Batgirl has a charm that easily resonates with new and old fans of the character. So there’s no surprise that even the opening of the book captures the heroine’s playful but down-to-business tactics when protecting a mom and pop donut shop from apparent robbers. Larson’s depiction of Barbara is a great balance of her friendly and totally relatable civilian guise (like Babs needing a bigger cup of coffee in the morning…we all have been there, especially me) and the computer genius / martial artist and still totally relatable Batgirl persona (for instance, when she puts on a Batgirl coat over her Batsuit to beat the oddly cold weather. Not normal protocol but that’s why we love her).

Larson continues to write Babs and the supporting characters with great spunk and fluidity that makes this series so enjoyable to read.

While Dan Mora’s cover showing Batgirl and The Penguin seemingly joining forces as a “Dynamic Duo” of sorts is a definite draw in to reading this comic, its Wildgoose’s lines that makes each panel even more exciting than the last. From the ever changing emotion provoked through Batgirl’s green eyes beneath her mask to the subtle snowfall strangely plaguing the residents of Burnside, the art (pencils, inks, colors and all) bundles up Larson’s Batgirl persona nice and cozy…like Bab’s awesome Batgirl coat.

If you’re a fan of Larson’s Batgirl run, this is a new arc I know you’ll be excited to start reading. This plus a classic Batman rogue making a dastardly appearance are sure signs of a great story developing.