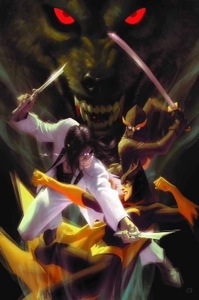 Batgirl #29 has just the right touch of humor, dash of adventure and the perfect unexpected cameo. When we last left our dashingly devilish divas of the night, Barbara & Mary, they were on the hunt for a missing 8 year old girl. What they find is what appears to be yet another deluded and broken mind for Batgirl’s rogues gallery. This villain, the handsome Silver believes the whole Bat-family are a brothel of vampires sucking Gotham city dry. (Don’t worry, these aren’t spoilers but set up from the previous issue.)

This issue does a great job of recapping the lengths Barbara had to go to in order to find this missing girl. This allows Pasarin to focus on bringing us all the action: from a shootout with the Gotham P.D. to hand-to-hand combat between Silver, Batgirl and Strix. In one panel, Blond delivers a flourish of bloody color that teleplays exactly what Simone had to have been thinking or she changed her script to match Silver’s desperate play. It’s a scene that speaks to how in sync this creative team was for this part of the issue. Facial expressions and body types also feel more consistent and developed than the previous issue.

Add to that Simone’s classic wit. While not as pervasive as some of her pre-New 52 work, there is more of a lighthearted spirit to this issue than previous arcs. There are interactions that have a wry twist while others give full-on chuckles. There is also a glimmer of the Bluebelle/Daylight team-up in this two issue arc that was so wonderful in the Gothtopia issue. Hopefully, there is yet another reformed villain down the road that can be welcomed into Batgirl’s growing list of allies.

This is all capped off with a surprise cameo from a long missed character. It’s such an unexpected twist ending that you might feel silly (I did) for not realizing was a possibility. It reminds readers that the supernatural can show up anywhere, even Gotham.