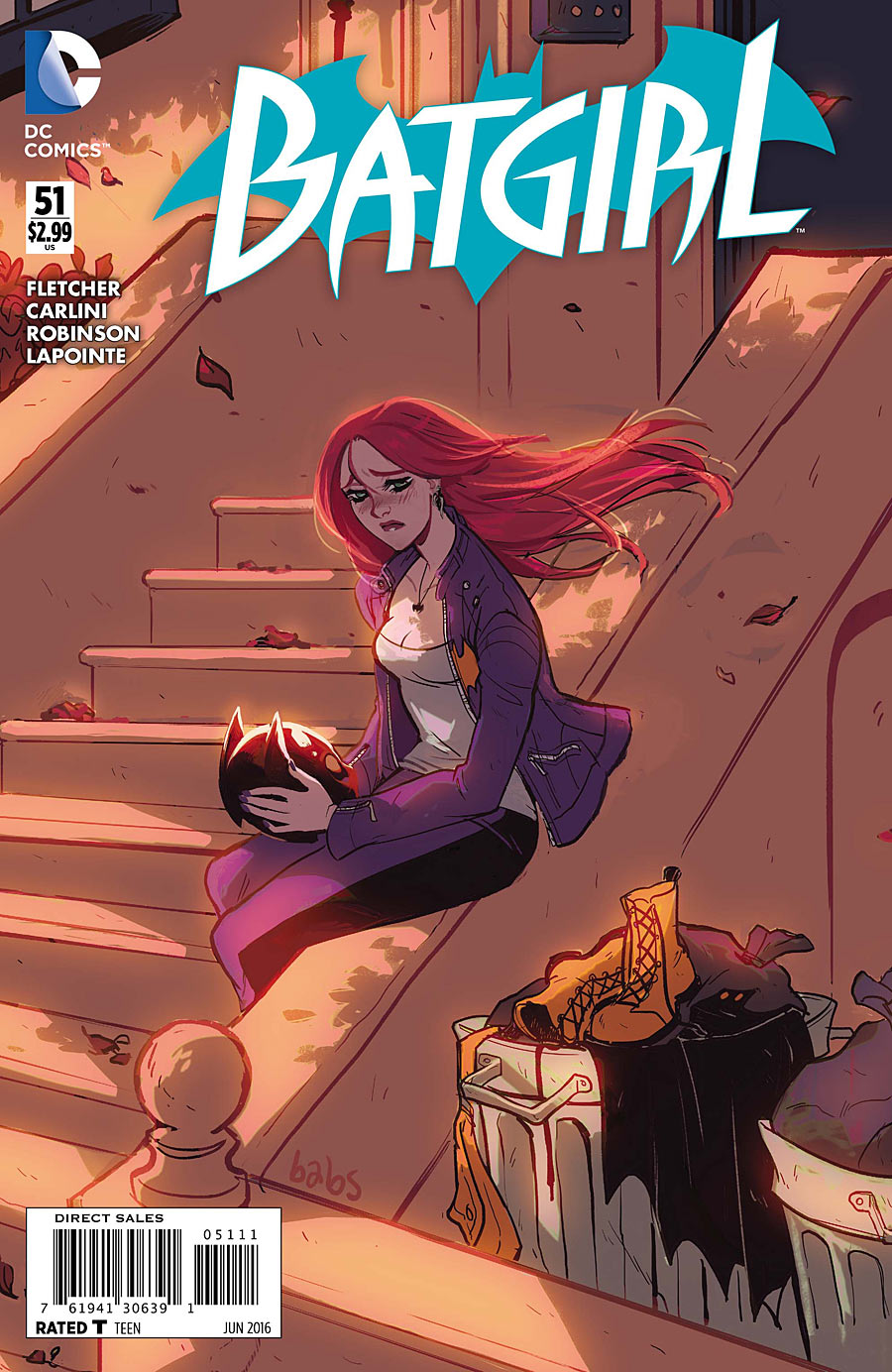 After her battle with Fugue, you’d think a girl could get some downtime. Just the opposite, as Batgirl and Barbara Gordon are both pulled in every direction, between school and fighting crime and running a new energy company for the future of Gotham City. Good thing she has a little help from her friends…

I find these moments in comics tough as a tuned-in fan. When I was a kid, I literally had no idea a new Justice League line-up was happening until I saw the issue on the rack at the grocery store. Today, we have a minimum of three month advance warning on everything — new storylines, new #1s, cancellations, character appearances and deaths. So, the moments between when you know what’s coming next and still have what comes before it to read through — they’re tough.

And in this case, bittersweet. Make no mistake, I’m looking forward to Hope Larson and Rafael Albuquerque’s run on Batgirl starting in July. It seems, by all accounts, to be a continuation of so much of what I’ve loved about the Stewart/Fletcher/Tarr run, with a team I trust to do good work. My skepticism is at a pretty low point, lower than at the last creative change (and look how brilliantly that turned out!).

But knowing that Fletcher is now putting ducks in a row for an exit on the book, and doing so quite diligently in issue #51, can’t not be bittersweet. But at the same time, there’s something about this first chapter of his last two-parter that feels like a worthy encore to the last big storyline — almost even a curtain call with all of the characters that have formed the “Fletcherverse” this past year taking a grand bow.

Frankie undoubtedly takes point here, moreso even than Barbara for most of the issue, driving Spoiler and Bluebird as she might Batgirl (although with less resistance). Babs mentions wanting to train Stephanie and Harper, the role of teacher, as we know, that’s moved over to Batwoman in the upcoming Detective Comics. But Frankie once again shows her potential to be as adept a crimefighter and operator as Batgirl and Black Canary are. And it’s great to see that, not only of a queer character of color and disability, but of a character whose provenance is less than two years at this point. Frankie is just that well developed.

Of course, seeing the virtual roll call of all of Fletcher’s kids come crashing across the screen to combat Gladius (and tie up that loose end from the last Batgirl Annual) is a delight as well. Black Canary, Vixen, Spoiler, Bluebird, Luke Fox, Alysia Yeoh, Qadir, Frankie — and Olive and Maps, all who’ve played a significant role in populating this fully fleshed out world. It feels a little reminiscent of Black Canary’s guest spot in this month’s Gotham Academy #17, but even a little more gut-wrenching — as we know Gotham Academy continues on, whereas this run of Batgirl (not to mention the Black Canary title) does not.

The art divisions in this issue are a little jumbled, although each artist seems to be assigned pages that make sense for their styles. Carlini’s pages have some great punch, including a few fun layout moments, although they feel much more unfinished and tentative than what we’ve been used to from Stewart and Tarr. Jung’s very few contributions are solid, and he has a way of dropping ink lines that keeps everything feeling very fluid and subtly three-dimensional.

Robinson’s pages, however, just don’t quite feel right for the title, with his oddly shaped heads and hairlines taking away some of the stylishness of the book, and screaming “fill-in” rather than “guest” art. Barbara loses her youth in most of the scenes, and Olive and Maps have none of the quirky nuance they carry in almost every one of their other appearances. Overall, these pages don’t have the dynamism or life of the rest of the issue.

An epilogue to the third Burnside arc that feels like the last hurrah it is, Batgirl #51 hits me right where it probably should: in the space between gratefulness for the world that’s been crated and sorrow that come month after next, that world really won’t exist as cohesively anymore. Lots of things ending these days… here’s hoping we have bright beginnings to follow soon after. For Batgirl, and for Fletcher’s vision elsewhere.