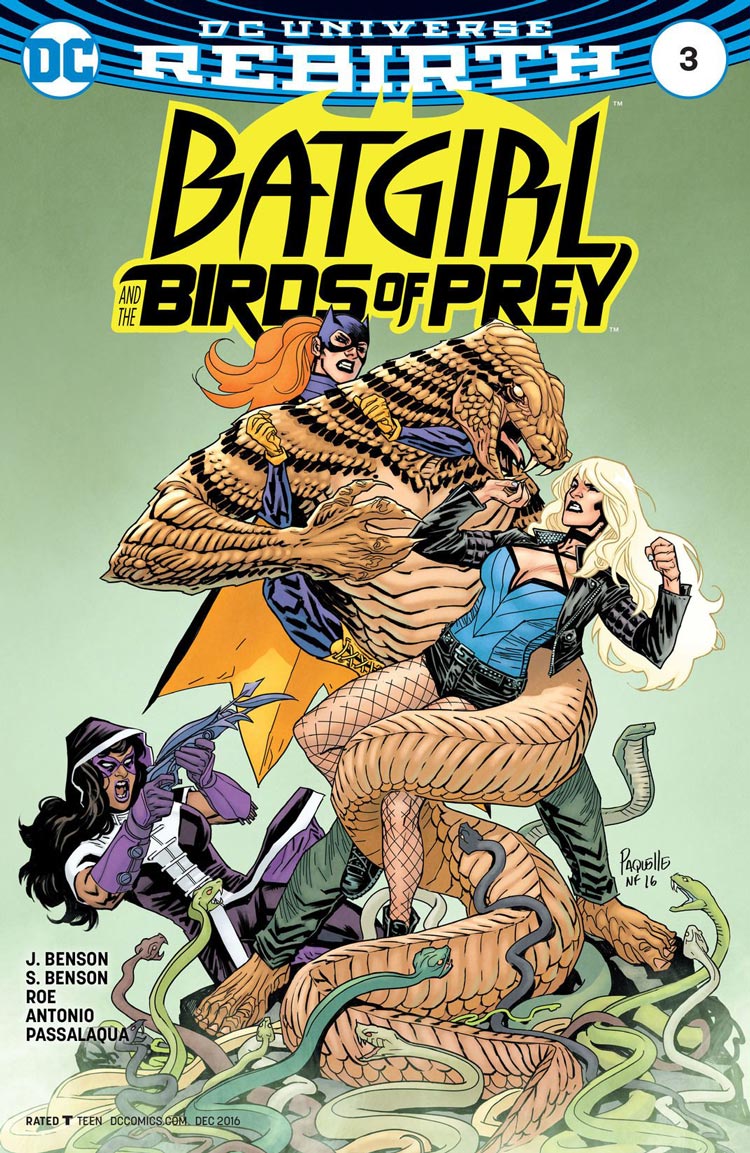 The mysterious new Oracle sends a nest of snakes after the Birds. Are they up to the challenge?

The story in Batgirl and the Birds of Prey #3 weaves back and forth between Dinah’s past and the Birds’ present. In the flashbacks, Dinah runs away from her foster home and trains in the martial arts, while in the present the team attempts to hunt down the imposter Oracle while also protecting a mob boss from a team of snake-themed assassins.

There’s a term that gets thrown around a lot in comics critique – “Decompression.” It refers to the tendency, prevalent in the last couple of decades, of comic writers to stretch stories that might once have fit in a single issue out in to five or six issues, enough to fit conveniently in a trade paperback. The result, often as not, is a story that’s perfectly satisfying when read all at once, but frustratingly unfulfilling when read in pieces as single issues.

With Batgirl and the Birds of Prey, the Bensons do something that I wish more comics did. They’re telling a big-picture story that stretches over six issues or so, while keeping each individual issue compressed enough to be enjoyable on its own. This issue fits three flashbacks, two fight scenes, and multiple establishing scenes into twenty pages without ever feeling rushed or confusing. The pacing slows down for expository dialogue, then speeds up for action. It’s a master class in serialized story-telling that I wish other comics would take a lesson from.

The flashbacks throughout the story are quite effective at giving a Dinah a narrative arc that’s otherwise understated in the present story, explaining her intervention at a key moment at the end. They build on a found family theme that’s been present since this comic’s first issue, which is important. Found family and female friendship are absolutely key to a great Birds of Prey comic, and, while the relationship between the Birds is rough at the moment, the story is slowly weaving them together and tightening their bonds.

The dialogue throughout is both a strength and a weakness. There were a few genuinely funny lines that I found myself cracking up at. On the other hand, the characters have a tendency to bluntly state their feelings and motivations in a way that can feel a tad ham-handed. Still, each character, major and minor, has a unique, strong voice that makes them a lot of fun to read.

Antonio’s flashback scenes have a slightly simpler, almost manga-like style, with slightly larger eyes and more use of verticle inked lines to provide texture. The sections in the dojo, thanks to Passalaqua’s muted colors, have a quality reminiscent of ukiyo-e woodblock prints. The two art styles are different enough to differentiate present from past, while similar enough to complement one another.

Batgirl and the Birds of Prey #3 is great serial story telling and a lovely-looking book, to boot.