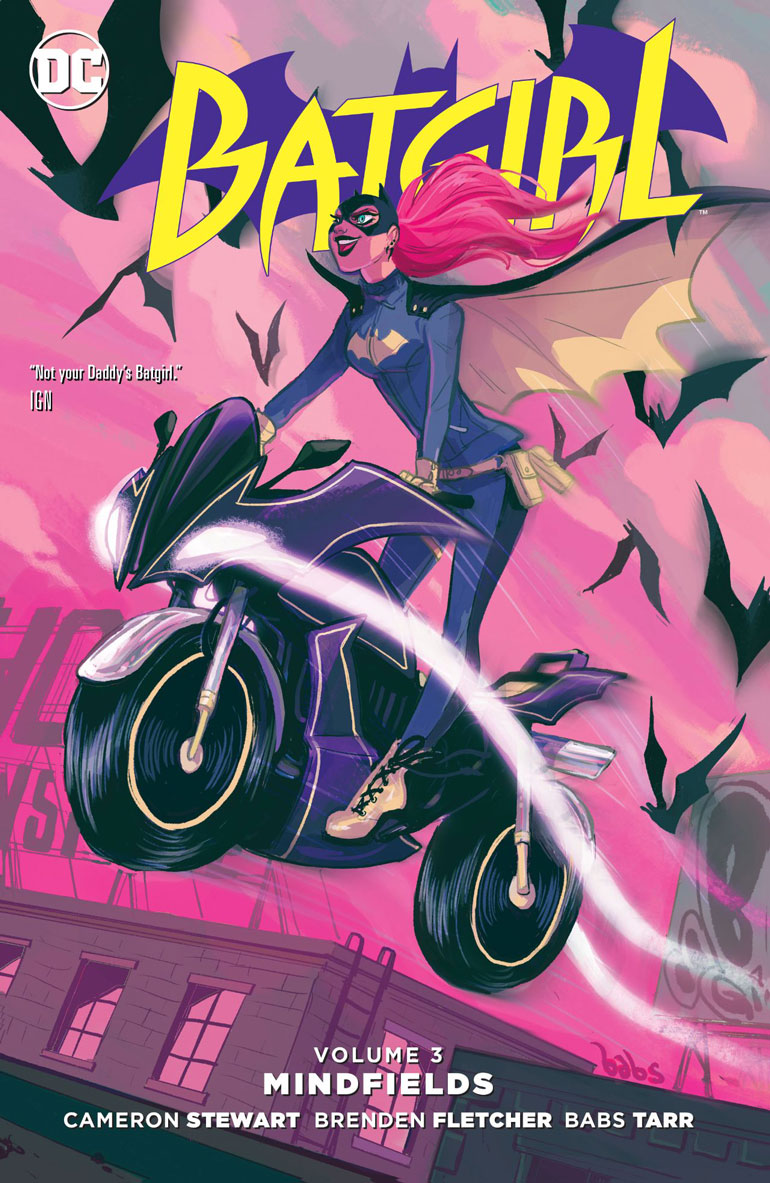 Barbara Gordon has been through a lot. She’s fought all-new villains in an all-new town, made new friends, and finally put the pieces together on her old ones. Everything should finally be perfect. So why is her memory failing? Who’s out to get her this time? And who will come to Batgirl’s aid when she needs it most? Well, a little bird told me…

Concluding volumes are always bittersweet in retrospect. On one hand, you have the satisfaction and clarity of a complete run in your hands, with the ability to look back and see a trajectory of what is accomplished. But on the other, there’s no more room for improvements or additions, with all potential now left up to other creators. And more succinctly put, there just isn’t any more.

That’s a little bit of what I feel about Batgirl Volume 3 as Cameron Stewart, Brenden Fletcher, and Babs Tarr conclude their historic run on the character they took from popular to ground-breaking. This is the run that, by its end, I think many readers took for granted because it so quickly became the minimum of expectation for what super-hero comics about young women should be. You only have to look out at the market today to see the difference between the tone of DC and Marvel female-led books before Batgirl of Burnside and what came after. It’s surprisingly stark.

And to some degree, we’re seeing a snapback as well, because the presumption one might make wrapping up this volume isn’t reflected at all in at least one of the books featuring Batgirl in Rebirth. And that’s because Mindfields was already the perfect first arc of a “Batgirl and the Birds of Prey: Rebirth” storyline. 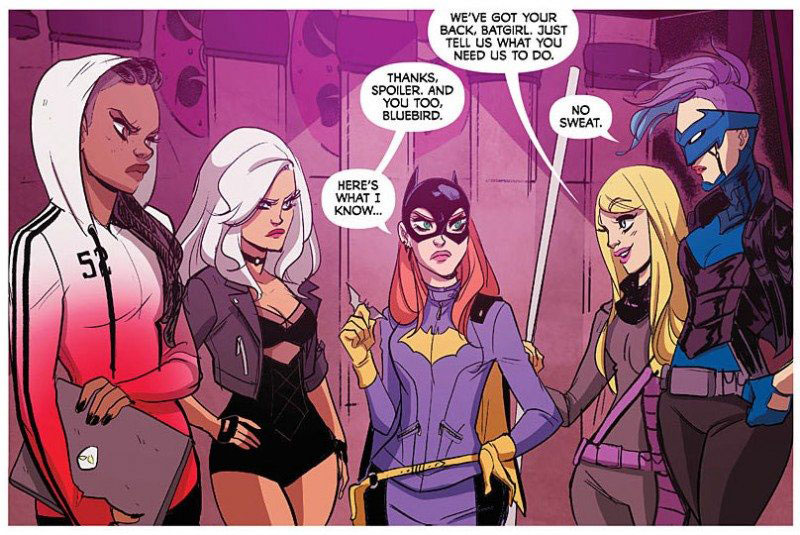 Pulling together Batgirl, Black Canary, Operator (Frankie Charles finally granted an alias), Spoiler, BlueBird, and ultimately Vixen as a de facto team is so much of the heavy lifting Stewart and Fletcher do as the run neared its completion. And to their credit, they didn’t just slapdash the characters together and declare, “Birds of Prey Assemble.” Carefully choreographing each character’s addition and development in this volume (and the previous two), the writers laid out the perfect road map for how to bring seemingly disparate heroes into formation.

Because let’s be honest. Team-building is an art and one that frankly isn’t given enough time in most comic book stories today. Readers (and to some degree, writers as well) are frequently impatient about seeing Team A fully formed by the end of Team A #1. And what gets lost is a lot of the stunning, blink-and-you’ll-miss-them moments that are peppered throughout this volume. Bluebird’s adoration of Batgirl as she flies off a rooftop on her motorbike. Babs’ final moment of realization that she needs to stop pushing Frankie away from heroism. Dinah’s pure and un-snarkable love for her best friend.

And those are just the little moments. Batgirl Volume 3 is very nearly as much a triumph for Frankie as for Barbara, as the woman-who-could-have-been-Oracle finally comes into her own. [More the pity, because like this volume’s rendition of the Birds of Prey, she has yet to appear prominently in Rebirth — although hope springs.] Frankie’s consummate heroism and intellectual prowess is the showcase of so much of the latter half of this volume, as she becomes a force independent of Batgirl in many ways. But it’s Batgirl’s acceptance of that fact that makes the narrative work. Frankie is no also-ran. Operator is her own hero, thanks to Fletcher and Stewart.

Ultimately, it’s just a supreme pleasure to see Batgirl come up against a challenge uniquely suited for her skills — the corruption of her eidetic memory — that positions this story and its outcome differently than the antagonism of Volume 1. We’ve seen her growth as a character enough in that span of time as well that she immediately reaches out for help. Because so much of the preceding tales have been about rebuilding herself and recontextualizing or rejecting what’s been around her: the relationship with her father, Dinah, and Dick Grayson specifically. 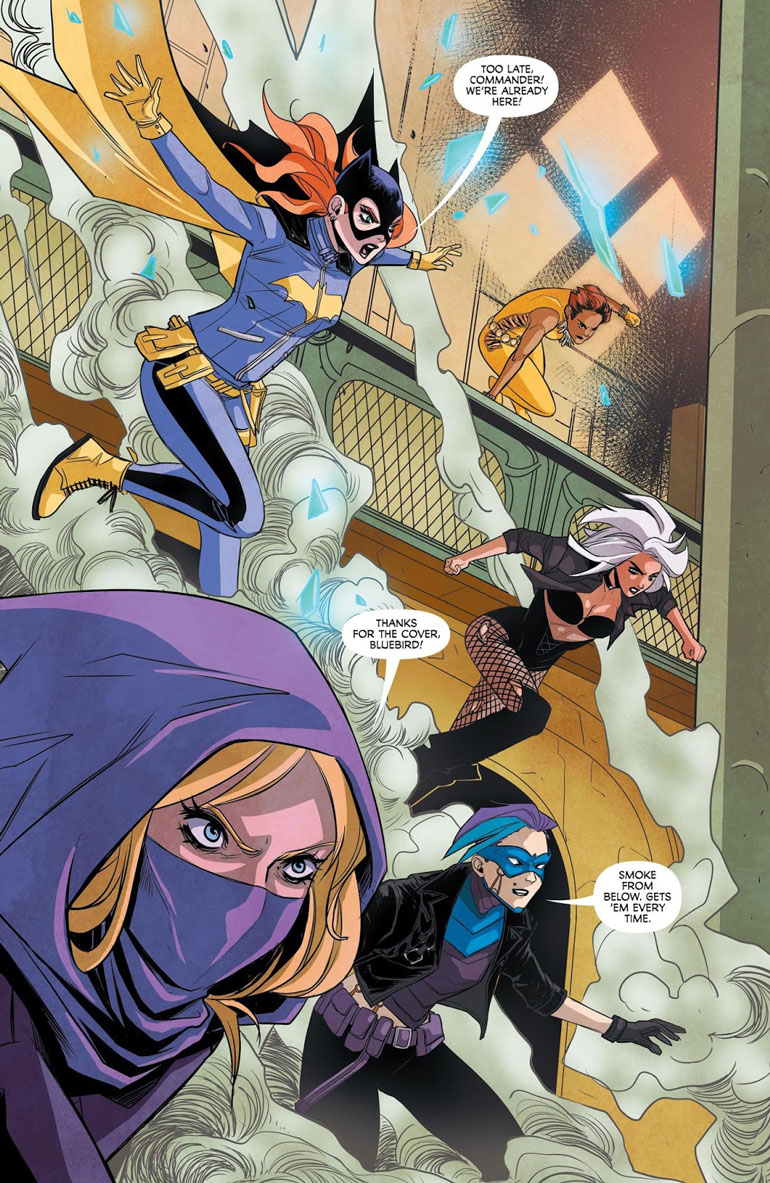 This volume, however, is about building something new. Maybe it’s a team. Maybe it’s a business. Or maybe it’s just Barbara finally in a place where she can embrace the idea of something bigger than herself. In any case, it’s a worthy conclusion to an arc that redefined Batgirl (and women-led comics in general) in so many ways for so many fans.

Babs Tarr takes the lead on that rebuild as well, but she’s hardly alone in a line of art credits that goes on. In individual issues, I actually found the mix quite disruptive, but there’s something about experiencing them in this volume as a whole that’s a bit more satisfying. In a lot of ways, it’s like seeing Batgirl, after being shook up and rebuilt, being reintroduced to the creative community as a whole. Tarr is that momma hen pushing her baby forward, but never quite letting the tip of her wing off its shoulder.

So what should be a mishmash of artists becomes more like a collaborative medley, with Tarr setting a standard that artists like Eleanora Carlini, Moritat, Roger Robinson, and more can blend into. Serge LaPointe serving as a standard for color palette throughout is an enormous benefit as well, lending the volume as a whole a uniquely vibrant feel without degenerating into pastels or flat primaries. The way the colorist balances precisely between the two is as much the legacy of this series as anything Fletcher, Stewart, and Tarr have done.

Of course, Tarr’s trademark breezy style is the highlight of the volume, giving Barbara the strongest emotional expression both in and out of costume throughout the pages. There’s no one quite like Tarr at transforming a panel with a simple expression of shock or a sly wink. 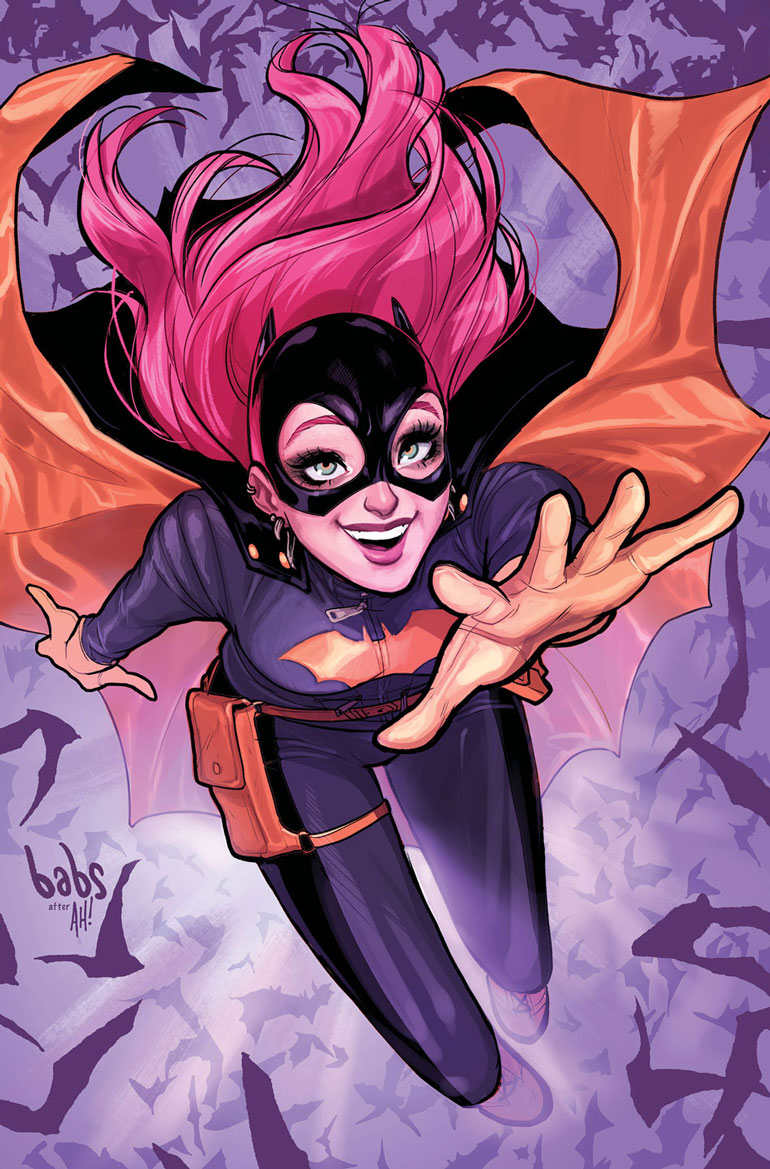 No one, perhaps except Bengal, who illustrates the silent special included at the end of the volume as more of a bonus than an epilogue. As Babs sets out to rescue future Batgirl herself Tiffany Fox from the victims of the Joker’s Endgame, Bengal is perhaps the wisest choice of artist for a dialogue and caption-free story. The artist is so expressive in body language and facial expression, not to mention being able to pull off emoji in a story without looking foolish. But the greatest accomplishment Bengal can take credit for is the tracking of young Tiffany’s emotions. The effort of a fake smile covering up intense fear is felt right down to my bones, and a stunning lesson for artists on emotional complexity.

So, like I said, bittersweet. Some of what was accomplished in these profound three volumes has had an impact on the comic industry I hope to never see go away. And some feels like lessons some books have already forgotten. Nevertheless, when all is said and done, having this volume stand on my bookshelf alongside the rest of the Burnside run, Black Canary, Gotham Academy, and more, is a gift I would never pass up. Good night, Burnside. I miss you already.