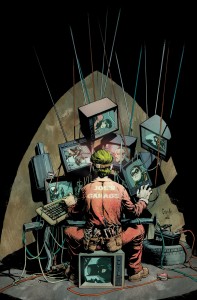 Batman #14 is a comic that leaves me with a number of sneaking suspicions.

Scott Snyder is extraordinarily good at that. In contrast to so many recent Batman writers, Snyder’s Dark Knight is never quite allowed to be comfortably certain about anything. Take, for example, the Joker’s abduction of Alfred Pennyworth at the end of Batman #13, which seemed to indicate that the Clown Prince of Crime had not just peeled away his own face, he’d also finally succeeded at peeling back the layers of Bruce Wayne’s secret identity.

The beginning of Batman #14 throws that all into doubt. Maybe the Joker is just after Bruce Wayne? He does have a penchant for trying to murder Gotham’s wealthiest and most powerful men. Maybe it has something to do with Wayne Enterprise’s very public association with Batman Incorporated? Perhaps it’s just that the Joker requires a butler for his own inexplicable purposes, and he heard that Pennyworth was the best.

Bruce can’t be sure, and that means that we’re left unsure as well. The Joker is a confounding opponent in the best cases, but Bruce’s sense of dislocation is palpable, and brilliantly conveyed in a conversation with Nightwing where Bruce and Dick find themselves tripping over code names and their mutual inability to maintain a sense of distance from a threat that quite literally could not hit any closer to home.

A number of things are cleared up (and set up for the future) by the end of Batman #14 — Scott Snyder may be gloriously, infuriatingly ambiguous at times, but let it never be said that he lacks a sense of pacing — but a few of my suspicions remain.

I suspect that Scott Snyder has read every Joker comic that I have (well, honestly, probably even more), and that he loves the exact same bits and pieces I do. It’s there in the way the Joker refers to Wayne as “Brucie,” just like he did in the Animated Series, and in the way Snyder revisits Ed Brubaker’s The Man Who Laughs and tweaks things just so.

I’m beginning to fear that Greg Capullo is an evil genius, turning even a cassette player delivering a message from the Joker into a twisted portrait of the mad clown. I’m still not totally sure how Capullo manages to fit two (count ’em, two!) magnificent full-page splashes into a comic that insists on so much talking.

Snyder and Capullo promised big things in Death of the Family — the return and reinvention of Batman’s most beloved adversary, a story that would encompass the entire Bat family, and a hero, already pushed to the edge by the Court of Owls, driven to the discovery that he has even more desperate depths to plumb. I have a feeling that they’re going to pull it off.