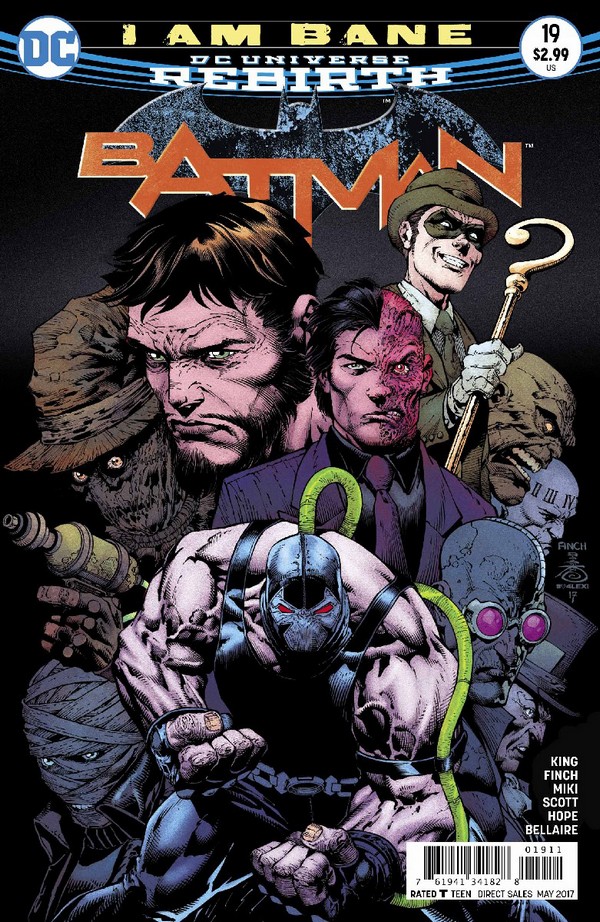 Batman turns to some unlikely allies in an attempt to hold off Bane from retrieving Psycho Pirate just a little longer.

This issue follows Bane as he fights his way through Arkham Asylum, where Batman has persuaded the inmates to stand in the luchador-masked strongman’s way. Bane is seeking to recapture Psycho Pirate, whom Batman abducted from Santa Prisca, and also to punish Batman for invading his prison sanctuary and breaking his back.

This is an issue in which, on paper, not much happens. It’s an extended fight scene interrupted by a few conversations. The creative team, though, elevates the contents into something sublime, taking what could, in lesser hands, be nothing more than a time-marking issue and making it into a subtle meditation on the parallels between Batman and Bane.

This issue, the fourth in the present arc, “I Am Bane,” invites comparison to the fourth issue of the previous arc, “I Am Suicide.” In both cases, we follow a character, Bane in this issue, Batman in the prior issue, as they fight their way through a correctional institute-cum-fortress, Arkham Asylum and Santa Prisca, and concludes with a confrontation with their opposite.

We see Bane overcoming a series of Batman foes in a manner that is both astounding and effortless. He rejects negotiation with Two Face, physically dominates Solomon Grundy and Amygdala, resists Scarecrow’s fear gas, and breaks out of a humanly-impossible amount of ice when encased by Mister Freeze. All of this subtly demonstrates how Bane is a dark mirror of Batman. One of Batman’s defining traits is that, faced with an assortment of colorful and potent foes, he not only beats them but makes it look easy as he does it. Here we see Bane doing the exact same thing, moving through Batman’s rogue’s gallery with practiced ease.

The parralels run yet deeper. At different points, Batman and Bane explain why they’ve been pushed into this conflict. Batman insists he had no choice after Bane attacked his family and killed the fledgling hero Gotham. Bane believes his actions to be justified in light of his attempts to forswear violence and Batman’s invasion of Santa Prisca. Each one believes justice is on their side. All of this is underscored by the quotation that ends the issue, from William Blake’s The Marriage of Heaven and Hell, in which the Just Man is pushed from his meekly-travelled path and forced into conflict with the Villain. Both Batman and Bane, over the course of the issue, portray themselves as the Just Man reluctantly drawn into conflict. And even as each one believes that if they can just win this fight it will all be over, Calendar Man stands in the center of the issue, mocking them and archly stating that they’re fated to continue this battle forever, as surely as the seasons turn and return.

The art in this issue is visceral and raw, drawing the reader into Bane’s brutal brawl through Arkham. The dynamic paneling draws the eye through the action to give the story momentum even when it pauses for dialogue. The paneling on the final page, in particular, shows a visual parallel that emphasizes the larger thematic parallelism of the story. The color work, especially its use of shades of green in the lighting, the venom tubes, and Bane’s wild eyes, unifies and elevates the art.

Batman #19 is a great example of the work that King and his art teams have done with Batman post-Rebirth. It takes familiar themes and concepts and approaches them in novel ways, and never misses an opportunity to elevate the subject matter and give the reader something to think about.