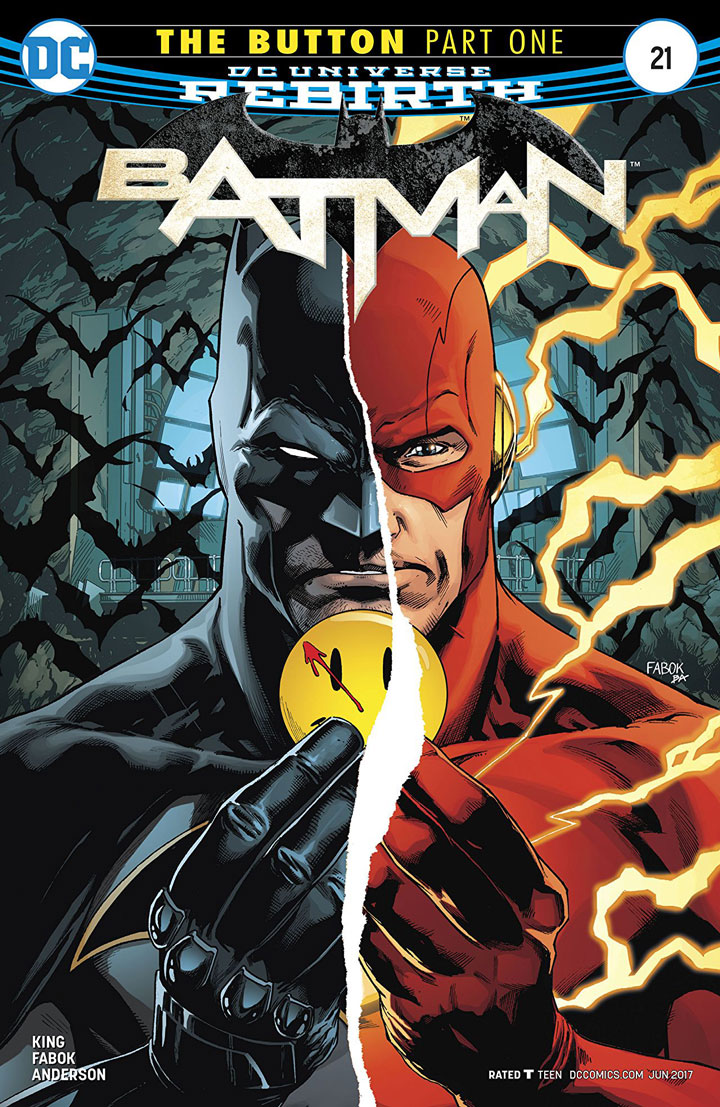 “The Button” begins as we pick up right where DC Universe: Rebirth #1 left off. A mysterious, radioactive button is found in the Batcave, and it’s up to the world’s greatest detectives — Batman and the Flash — to solve the puzzle. That’s if the Dark Knight can survive the arrival of Reverse Flash!

This issue is bound to excite many, infuriate a few, and leave a lot of unanswered questions. So it’s curious that I feel so content with what King and Fabok have packaged here, as they begin their collaboration with Joshua Williamson, Howard Porter, and the mastermind himself, Geoff Johns. As a single issue, Batman #21 actually holds together really well, and trying to pull apart the why is what’s interesting me right now.

It’s not that King gives us answers to any questions asked in Rebirth or since. In fact, he immediately compounds the mystery, reintroducing us to a now panicked Saturn Girl, still locked in Arkham where we last saw her in “I Am Suicide.” Shouting and crying, “The Legion will die!” is tease enough. But we have her tracking some very specific events from her past — a death no one made it to in time to stop, while everyone simply looks on. It’s unnerving and in particular echoes a refrain:

“We’re all just trying to have fun out here. I mean, is this fun?”

A cynic would call this an accidental meta-commentary on weaving the characters and events of one of the darkest (albeit most genius) works in DC publishing history, particularly given the relatively light nature of the overall Rebirth schema. I’m not sure I’m that cynical as a reader.

But as commentary on the moments that pervade DC Universe history where things went from relatively flippant to high-stakes serious, there are few better than the ones alluded to in these short 20 pages.

The murder of Iris Allen at the hands of Eobard Thawne.

The deaths of the first Legionnaires, followed by the departure of Superboy from the team to become Superman.

The murder of the Comedian in the pages of Watchmen, an act that took relatively innocent Charlton characters and subverted them via analogue.

The death of Thomas Wayne, the one that started it all.

So it’s no wonder that Batman — unlike Flash, the Legion, and the super-hero template itself — started out so dark and deadly serious. Batman had to grow into fun. The others all began with it and had it tainted along the way, some never returning honestly, even with resurrections and, indeed, returns.

And then there’s the question of time, obviously tied intrinsically to both the Reverse Flash, the events that led to Thomas Wayne donning the cowl instead of Bruce, and its part to play in the vision of the great, blue, naked god: Doctor Manhattan. While we’ve not yet seen evidence of his presence save for the flash of blue light that has so far consumed Owlman, Metron, and now another victim, it’s fair to say his essence lingers on Fabok’s pages.

True, the nine-panel grid in its finest execution by Watchmen artist Dave Gibbons was a reflection of Rorschach’s psyche — Rorschach being the first (or last, depending on how you think of it) victim of Manhattan’s combustion. But Fabok’s not playing the same mirroring tricks here that Gibbons and Moore played in the classic Watchmen #5. He’s using the panels to intersperse time and break it down, inch by inch and second by second, as only these two combatants can.

And in portraying this furiously outmatched battle between Batman and the Reverse Flash, King, Fabok, and Anderson are highlighting a tension that’s very uniquely King. So much of the plot of this book, its structure, and where it seems to be leading definitely bears the earmarks of a Geoff Johns epic event, up to and including the emotional pull of loss. But the moment-to-moment structure bears the fingerprints of King’s pacing and analytical movements.

Fabok’s inks over his own pencils are perfect, giving both Batman and Thawne in particular the detail they need in a super-speed fight to make it clear they are each moving fast in their own way — Thawne bodily and Batman in mind. The sharpness across the board, from foreground to background, sucks me in, leaving me wanting to dig deep into each panel and savor the relatively few moments we have in a very abbreviated event comic. 80 pages — the very same as the Rebirth special that spawned this idea — is not much space to resolve.

And so, that’s the crazy bit. I don’t get to the end of Batman #21 frustrated or feeling incomplete. The moments King and Fabok lay out have crystallized and slowed in my mind to such a degree that the fight itself feels fulfilling. This is but one chapter in a much larger story — much larger than this crossover will likely hold. But in this moment, I’ve gotten this epic fight that could only end one way, and a lionshare of things to think about until next week. What could be more fun than that?