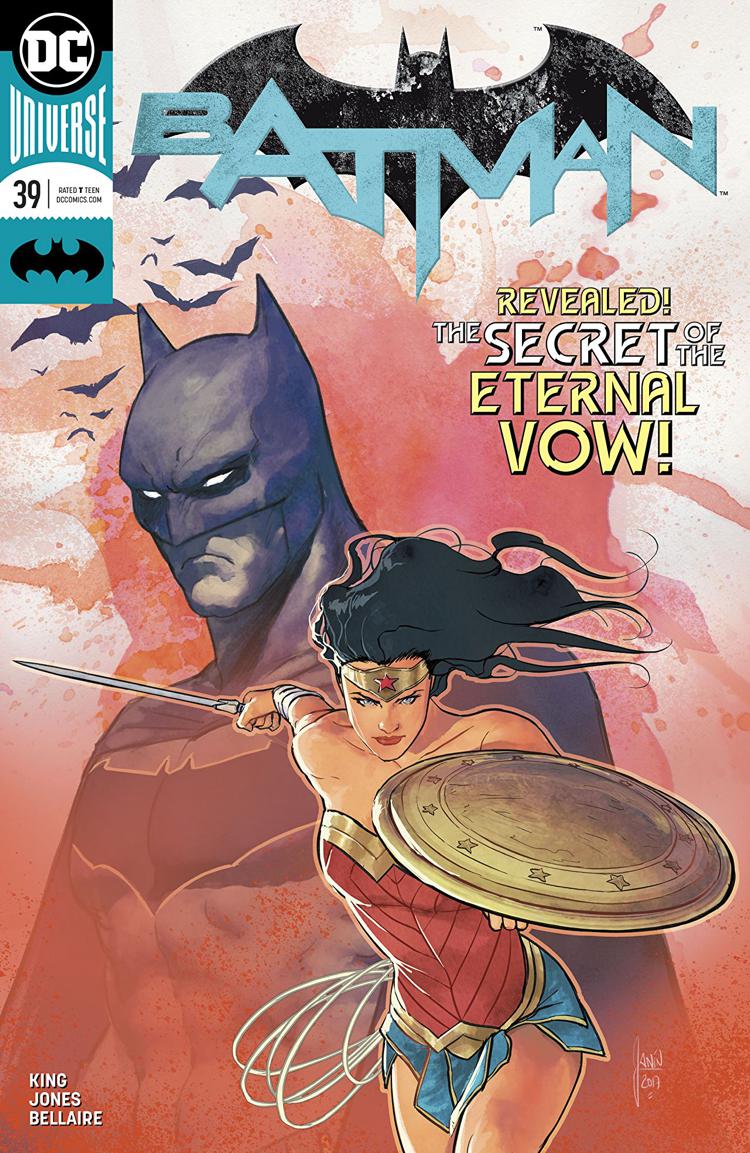 The trinity of the DC Universe has felt like a pantheon of gods for so long that it can be unnerving at times to be reminded of their humanity. The “Super Friends” storyline in Batman has been doing just that for the past few issues. However unnerving it may be to the reader it is necessary to keep the characters relatable and within reach of being models to learn from. Beyond that it’s also just fun to see these characters just living life and having everyday relationships with each other. Issue #39 of Batman focuses on Bruce and Diana’s relationship while pitting them against monstrous odds.

Tom King’s writing continues to be as amazing as the heroes he is breathing life into. He truly has given Bruce Wayne a humanity that he did not possess before. Even if it is just expanding his usual vocabulary beyond “No” or grunts it’s more important how others are reacting to him. That he is even interacting more with others goes to show that the Batman we had come to see as a dark brooding loner is so much more. The change in him is affecting those around him and giving everyone a chance to deal with their inner humanity. It gives the reader a chance to escape from the darkness of real life and hang on to the hope for something better.  If our heroes are more than just gods, or perfect humans then that means we have it in ourselves to be like them.

The story itself is intriguing and introduces us to a promise that must be fulfilled by Batman and Wonder Woman. It’s simple story that while exhibiting their strengths also reveals a great weakness. The dialogue between all the characters throughout the story is a lot of fun to read especially Diana’s interaction with Bruce. There a quite a few funny and cute moments including a themed fast food restaurant. The amount of levity in the current issues, however, will make the reader wonder when the storm will arrive. Something has to be coming. This issue ends, though, in a very surprising way that will definitely leave the reader desperately wanting more.

Joelle Jones artwork is so good. She draws women, their expressions especially, so beautifully strong. Even if they are not Wonder Women there is a strength that resonates in their form and visages. It honors them as it rightfully should. On the opposite end of that spectrum she has a knack for drawing dark and vicious creatures as well as rendering the cold sharpness of swords and shields. There are a number of creatures in this issue that look especially dangerous and more than capable of giving the heroes a run for their money. There is a ruggedness in Jones’ style that is especially apt for giving everything a very lived in look. The world isn’t clean and perfect and her art embraces that. For the heavy action scenes that occur throughout this issue she makes excellent use of dark thick outlines and motion lines to give a sense of the frenetic movement of the epic battles.

Jordie Bellaire expertly handles the colors on this issue. It brings the story to life with deep colors that impart the mood of different scenes. In one pair of panels deep reds one toned coloring give the moment anger, frustration and pounding high blood pressures. That paired with excellent lighting effects make it a delight for readers to take in more than just one read through.Jones and Bellaire makes as great a combination as Superman and Batman. Clayton Cowles provides clear reading with his lettering on this issue. A friendly lettering style helps to bring to life the banter between characters.

This is another great issue of Batman that is worth owning and reading over and over. It’s a treat to see Joelle Jones draw Wonder Woman and enjoy Tom King’s story with it is a perfect pairing. DC should start a new title that just has the “Super Friends” in one off light stories like the ones we have been treated with in recent Batman issues.