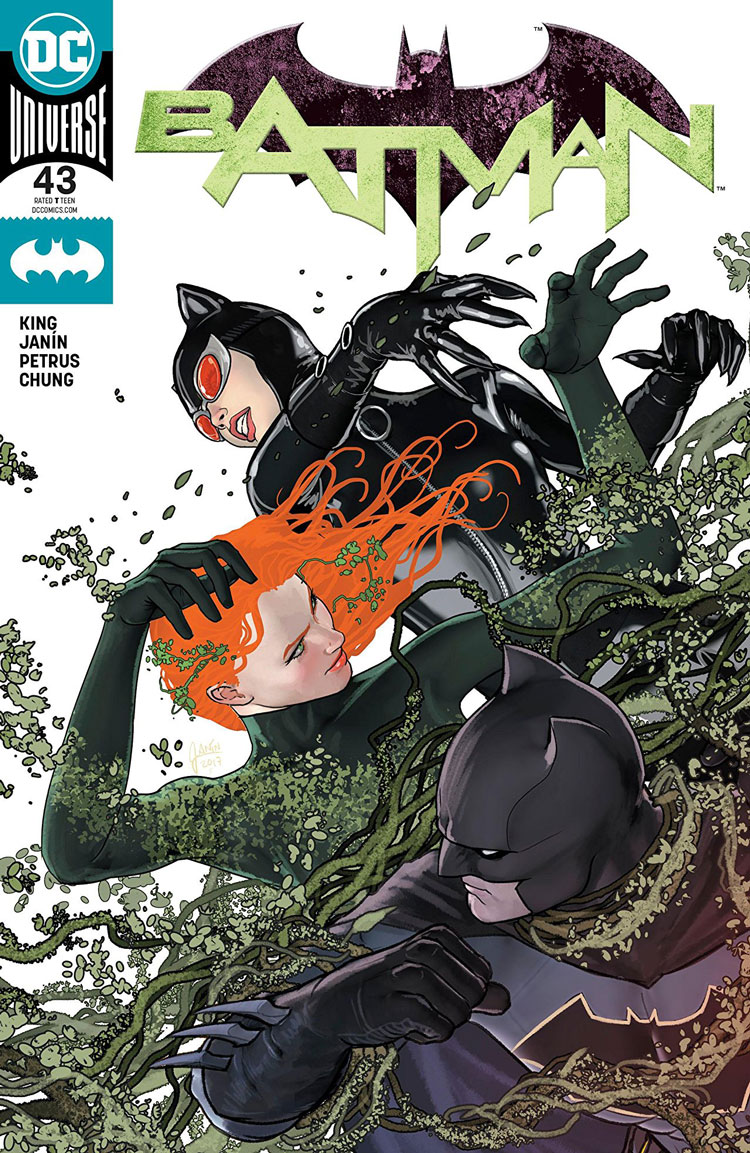 The arc of “Everyone Loves Ivy” comes to a close with the third act in which Batman, Catwoman, and Harley Quinn confront Pamela with the truth about herself, her future, and the fate of men she believes she killed. At its heart, King closes out his story on a deeply emotional level rather than in a way that evokes explosions, plants everywhere, and heroic shouts of combat. In true King style, character proves to be the main course at the culmination of his banquet.

Many reviewers and fans have provided commentary concerning how King presents Ivy and her motives. As a reader, I feel like the final few pages of Batman #43 cement the future Pamela’s character has earned over the years, one where she is admittedly not ‘fine,’ yet where she is also capable of being more than who she has been depicted as. Many characters try to reach Pamela so she can admit the truth about her mental state to herself, and the benefits have been a long time coming.

Even back in the 90s there were efforts on the part of the Batman: The Animated Series to give Pamela more depth than being an ecco-terrorist femme fatale. While some comic writers have taken to folding Ivy into aspects such as The Green, King’s work aligns with the efforts of other writers to start to see Pamela transition into something new.

Unfortunately, transition is not always easy. Pamela does not simply admit to what she has gone through, and that is where King pulls his ace.

Yes, Harley enters the picture in the way many believed she should. Yes, the moments between her and Pamela are amazing. And, yes, this feels as close as possible to DC Comics formally advancing the pair’s relationship towards something closer than other stories have previously tried before (to this reviewer’s knowledge, at least).

There have always been those who want Pamela and Harley together, and King pushes the pair to do something tougher: share pain. Harley and Pamela have panels together that evoke the strongest and toughest parts of relationships, when one must admit to the other that they hurt and then another must listen, yet be unable to do anything at the moment.

While these beautiful moments of character development and evolution between Pamela and Harley are great on their own, they foreshadow things in Bruce and Selena’s life that, hopefully, will resonate beyond King’s plotted story arc.

The art continues to be the kind of work which emphasizes facial emotion and depth. There are a series of panels in a traditional grid formation which allow readers to see how faces contort and consider their environments. One sequence with Pamela and a simply fly manages to be unsettling and thoughtful all at the same time. The split work between Janin and Petrus merge together between the layering of green to make a great story. There should also be praise for the coloring work of Chung since, given the dense foliage of Ivy’s world, it could be easy to simply ‘go green’ and then become lost in the spectrum.

If there is any real criticism I have with the issue, personally, it is Riddler’s involvement in the story, yet this is something that actually winds up sparing the plot from its worst pitfall. I can see how many might believe this is King’s escape hatch to void issues with Ivy’s character and remain true to the story he wanted to tell, but there might be those who see the final few panels with Riddler as simply cumbersome. I will admit, as a non-Riddler fan, the reverse sequence and the timing of King’s delivery is great.

There is also a sequence which, in panel work and dialogue, manages to evoke the Rocky Horror Picture Show dinner sequence (Brad! Janet! Rocky!). I admit the sequence was probably not meant for laughs, but it proves to be another enjoyable aspect to this already great comic.