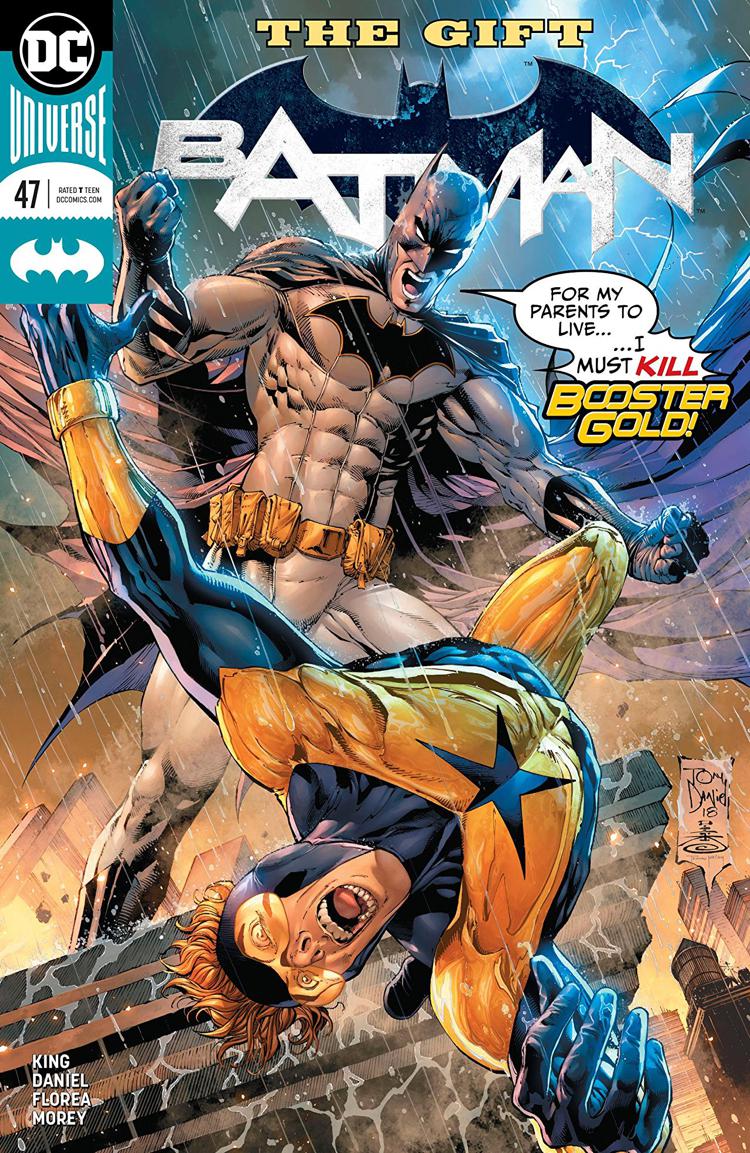 I make the “darkest timeline” joke a lot. I take great joy in referencing the “infamous” episode of Community in which everything is going wrong and there is so much fire.

This is damn near Batman’s darkest timeline.

Tom King wraps up the Booster Gold mini-arc of Batman, bringing Booster’s bizarre concept of a gift to a close. King’s take on Booster is great. I am, admittedly, not well versed in the history of Booster Gold, but this delusional lunatic bending time like a plaything entertained me to no end. As is seemingly always the case, like with Mister Miracle, Barda and so many of Batman’s rogues, King’s take on a character is memorable, dynamic and wholly unique. His laughable banter with this alternate Bruce shows the insanity of this situation, building drama and tension in way that borders on mania. This is no easy feat to pull off, as Booster could easily be a flop here that just doesn’t work….but he does. He works so well here. What intrigues me most is what may come after this issue/mini-arc, with a final set of pages that surprised me greatly. Who knows what Booster may have wrought….

Tony Daniel’s art gets the job done here, despite some inconsistencies and characters that feel lifeless at points. His work is stronger than it has been throughout the arc, and he captures Booster’s mania I mentioned earlier well. The colour work by Tomeu Morey sets a great visual tone, with Booster juxtaposing everything that is Gotham brilliantly. The palette he uses is rich and moody and then flashy where it needs to be, strengthening Daniel’s pencil work and giving the art an extra level of pop. Clayton Cowles’ lettering is flawless, as per usual, and rounds out the visual package well.

Batman #47 drives the storyline towards the wedding we’ve all been waiting for by adding some tension, drama and a seed of who knows what may come from Booster’s idiotic idea for a “gift”. King’s mastery over these characters continues, and Batman is still a surprising force to be reckoned with 47 issues into his run. To say I’m locked in as the title drives toward issue #50 is an understatement.