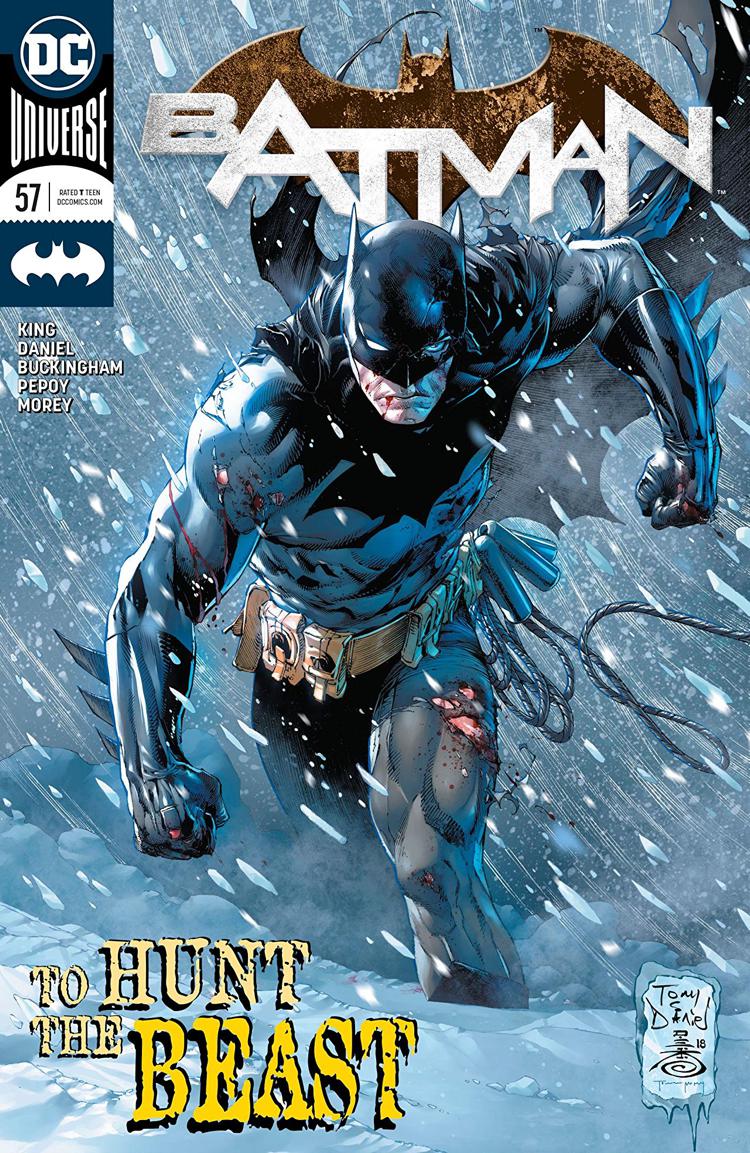 The Coldest of Battles

Tom King and Tony Daniel’s conclusion to this short arc “Beasts of Burden” mixes one of the coolest fights (of course pun intended) The Dark Knight has had in King’s illustrious run and a surprising folklore that brings depth to this already action packed issue.

Survival of the Fittest

In the conclusion of “Beasts of Burden”, Batman faces Anatoli Knyazev of the KGBeast who put a hit out on Nightwing (Dick Grayson). To get answers, the Dark Avenger fights KGBeast in a bloody battle in the blistering snow. While King continually provides a rich dialogue for his Batman, this issue saw the focus of brute vs stylized strength headed by Daniel, with King’s narrative guiding along the violent panels. The secondary story is seen in several pages of the Russian folklore “The Animals In The Pit” by Alexander Nikolaevich Afanasyev.

As Batman and the hitman come to blows in the snow, King frames the fight with each other’s father’s, including a flashback of Thomas Wayne to a young Bruce, reading them the Russian tale of outwitting their opponents to come out the víctor on the other side. The placement of this folklore within the context of King’s concluding story is palpable. Both men in their agendas, in this case representations of good and evil, take this tale of the survival of the fittest to heart. Especially so when King reveals that this conclusion is just the beginning to what the Batman has to face to get to the bottom of the violence for justice for his family.

A fresh take on the Batman mythology and a classic foe, King once again surprises with a new way to share the Caped Crusader’s presence and drive within this universe.

Tony S. Daniel’s work on Batman never ceases to impress me even in the Batman R.I.P. days. The art in this issue of Batman had to be strong enough to work on little to no dialogue and Daniel tackled this hurdle with ease. Every panel filled with bullets and batarangs showed the Dark Avenger’s agility and skill, impressively so in the surrounding harsh, snowy tundra.

A humorously warm contrast drawn by Mark Buckingham and Andrew Pepoy of Afanasyev’s folklore was the un-expectant balance within this story, illustrating what it takes to survive against the world seemingly against you. Bringing together the four artists in this single issue rounded out to an eye opening look at perhaps how the Batman sees his tactics to staying on top of the evil he continually battles, even if it’s far, far away from the streets of Gotham.

Once Upon A Time

“Beasts of Burden” was a solid 3 issue arc that shows the human side of Batman, hurting due to a villain’s heartless act on one of his own (practically) children. Tom King’s conclusion mixing the folklore element was a fantastic touch, making it easy to see why his run on the publication is continually celebrated. I’m looking forward to see how far down the rabbit hole – or pit – we will go to truly solve this mystery of violence in the following issues.