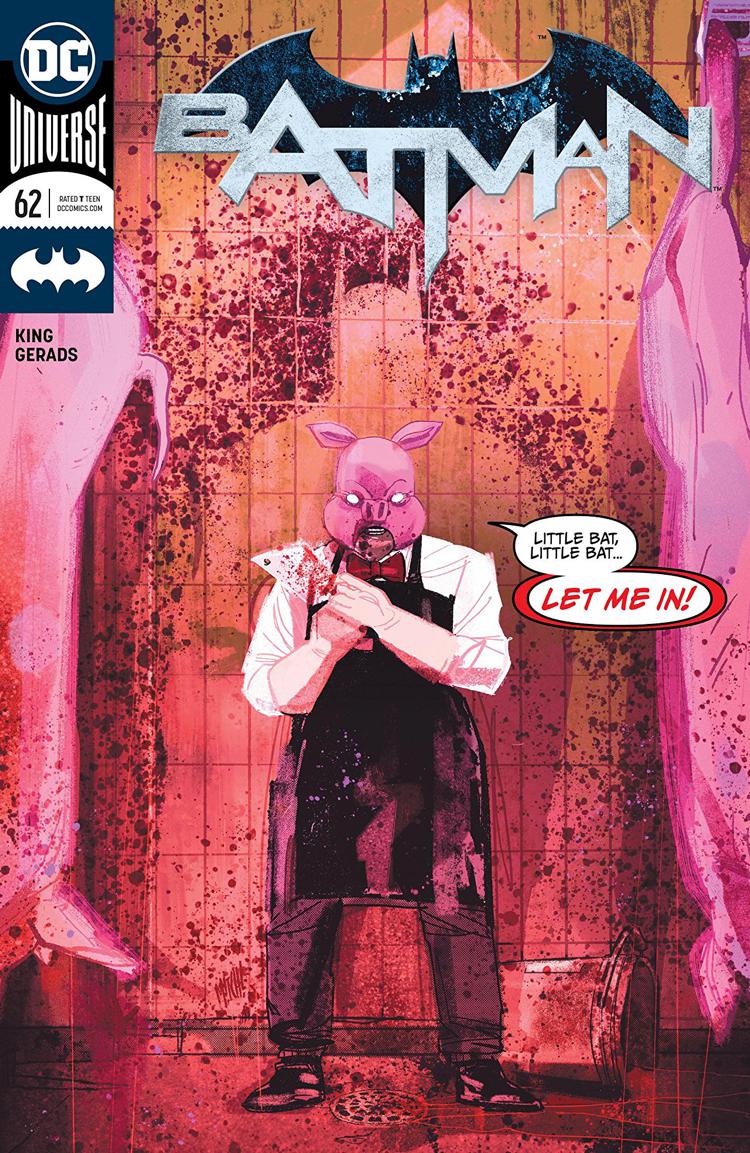 Batman #62 is a deliriously delicious disaster piece that all at once illustrates the fractured mindscape of The Dark Knight, recaps Tom King’s entire run by way of a fever dream and may very well make you a better writer.

The issue sees The Caped Crusader caught in a trap sprung by Professor Pyg which is, somehow, the least strange thing about the issue. Bats proceeds to take advantage of Pyg’s monologuing by trying to spring himself free of trap and dives deep into the existential abyss that was drilled into him this past 61 issues only to, heartbreakingly, realize that he’s broken.

As he’s choking on his own blood and trying to cut himself loose, he relives:

So yea, he’s got some stuff to work through and let’s all agree to play hush-hush on the whole Jimmy Olsen/Talia Al-Ghul thing from Action Comics #1006.

Jokes aside it’s a solid plot maneuver by King to have a low-key recap for readers who may have been out of the loop for a while, but it’s King’s script that truly makes this issue a marvel. The issue is yes, Batman’s internal monologue and recapping of events and King writes using his familiar signature of sparse yet potent dialogue but King, inspiringly and rousingly, chooses to invoke the Grecian classic, Pygmalion, to imbue the issue with a tragic gravitas to create an unforgettable portrayal of a man’s fall.

King is joined in this issue by his longtime partner Mitch Gerads who also brings a signature style to this issue but adapts it slightly to match Batman’s delirium. Gerads’ lines are slightly more jagged and irregular, Batman’s movements are more sluggish and labored, and Professor Pyg is depicted as being grotesque and ghoulish – all in effort to convey The Dark Knight’s state of affairs. Gerads, interestingly, chooses to lather the issue in red and yellow tones.

Gerads could certainly have chosen those colors to conjure a hell-fire aesthetic but, wasn’t Psycho Pirate shown to be a part of Bane’s cabal? Isn’t his costume red and yellow? Just saying.

Batman #62is an essential issue to Tom King’s run but holds legitimate educational value as a perfect example for any aspiring writer on how to write a tragic monologue. It reflects on all that has happened and makes us excited and a moderately terrified of what’s to come.