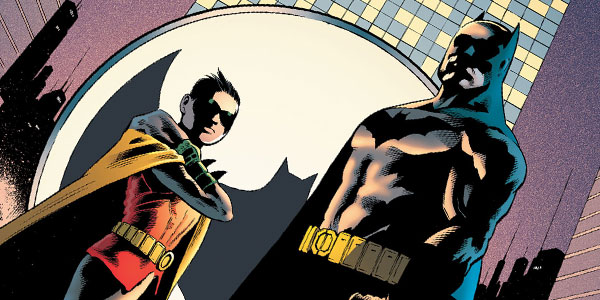 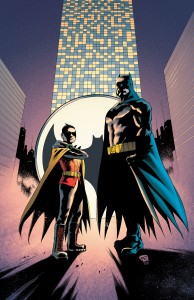 It’s almost a crime that Tomasi and Gleason’s Batman and Robin comes out on the same day as Snyder and Capullo’s Batman. I mean, it makes for a great beginning of the month for Bat fans, but it’s a bit hard on your poor reviewer. I’ve been meaning to write about Batman and Robin specifically since issue #15,1 which pitted Damian Wayne against the Joker in a head-to-head every bit as good as when Grant Morrison had Damian visit Mr. J. with a crowbar in the pre-Flashpoint Batman and Robin days. I was going to rave over how Gleason was one of the first artists not only to seem comfortable with the Joker’s severed face, but to actually play around with its possibilities. It was both horrifying and perfectly in character for the Joker to be unable to keep his hands off his own skin, stretching and pulling at it, and even turning it entirely upside-down on his own head. This was stuff even Capullo wasn’t doing, but one only has so much time, and Batman has been simply undeniable.

So perhaps it’s fitting that with Death of the Family wrapped up in Batman #17, Tomasi and Gleason get to use Batman and Robin #17 as something as an unofficial epilogue and quietly remind us of the quality of work they’ve been doing all along.

While a title co-starring Damian Wayne will never be short on action, Batman and Robin really shines in the quiet moments when father, son, and Alfred almost get to take a breath. By focusing on Damian as unexpected son, and Alfred as the unspoken heart of Wayne Manor, Tomasi has created the most family-centered2 title of Batman’s corner of the New 52.

Batman and Robin #17 gives us a glimpse of what Bruce, Damian, and Alfred see when they close their eyes at night. While a comic consisting almost entirely of dream sequences is something of a risky move, Tomasi pulls it off admirably, blurring the line between when the characters are asleep and awake just enough to pull off a surprise or two, and giving each of the characters a chance to express the fears and hopes that they normally don’t even admit to themselves. Damian shows himself to be apprehensive of his own dark side, Alfred gets a sense of what it’s like to be the one doing the rescuing, and Bruce allows himself to imagine that he might still be able to be saved.

In the middle of upheaval, with more promised to be on the way, it’s nice to be able to see everyone get to smile just once. Those of us who read Batman aren’t exactly expecting the light to win, but even darkness needs contrast.

1. And generally much more often. Pre-Flashpoint, I dropped Batman and Robin like it was hot when Grant Morrison switched over to Batman Incorporated, but the series has been fantastic since its New 52 relaunch.

2. Please note that in this context “family-centered” is not interchangeable with “family-friendly.” In the latter category, we still don’t really have a replacement for Sholly Fisch and Rick Burchett’s underrated The All-New Batman: The Brave and the Bold.