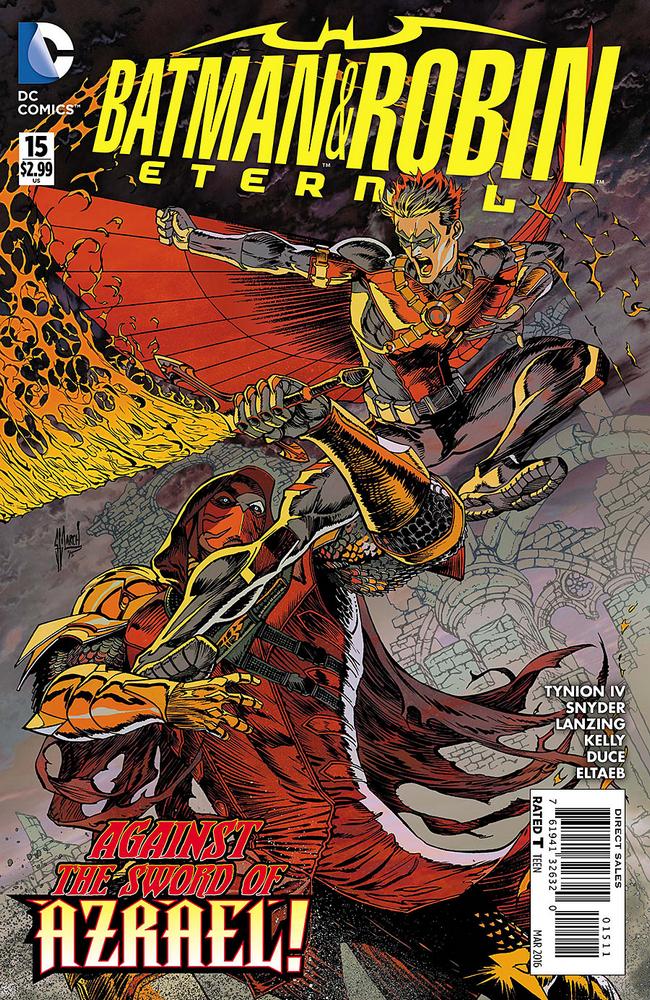 This week we shift to the Red Robin/Red Hood/Azrael storyline, as things get intense and Azrael’s faith/condition start to crack.

I’ve enjoyed this beat of the story so far, and I was happy when I saw issue #15 was going to be checking back in on this storyline. I like Red Robin and Red Hood best when they are paired, as I feel the two characters compliment each other in a nice “oil and vinegar” sort of way that makes for fun comics. Tim’s fast-on-his-feet nature is captured nicely and juxtaposed with Jason’s fists-will-fix-this brawler style, making them a great pair to constantly have grating on each other and their foes. I can’t say as I’ve been an overly huge fan of what I’ve read of either character in the past, but this storyline is winning me over and showcasing what is likable about these two former Robins.

Jackson Lanzing and Collin Kelly handle the dialogue for both ex-Robins well and give Azrael a very strong voice. Azrael’s handler has some great speeches as well, and I thought the writing team hit on something very interesting by adding this character into the equation to compliment the “hunt for Mother” storyline. Red Robin and Red Hood are definitely not in an easy situation to slip away from and that makes for a good story, something the writing team is definitely crafting here. The setting of Gnosis is an interesting change of scenery from the dark worlds the other issues are dealing with, especially where Mother’s compound or Scarecrow’s operations are concerned. Gnosis is as much a part of the story as Azrael and his master, and I liked how the writing team used the location to amplify this tale.

Christian Duce’s work on this issue is excellent, and I would argue it is the best work we’ve seen in this weekly series. He excels when penciling characters in masks, giving both Azrael and Red Hood some menacing looks. Gnosis is a visually stimulating environment and Duce didn’t skimp on the backgrounds or detail at any point building a world of knowledge that is impressive and eerie at the same time. His action sequences are strong and he captures the personalities of these characters very well. His take on Mother is the perfect combination of creepy, powerful, menacing and meticulous and he handles the large cast of this comic very well. My typical criticism of weekly books is that the further they get from the initial issues, often times the art suffers but Batman And Robin Eternal #15 certainly proves that theory wrong. Duce delivers great work and Eltaeb boosts it nicely with strong colours, giving readers some rock solid visuals to go with this great story.

Batman And Robin Eternal #15 is a fun read that is very well executed. No corners are cut here with the writing or the artwork and this is one of my favourite issues in the series so far. Tynion IV and Snyder are crafting a very interesting story that Lanzing and Kelly execute well and Christian Duce and Gabe Eltaeb brought some seriously great art to the table this week. Issue #16 has big shoes to fill and I’m continually more excited about where this team is taking Batman And Robin Eternal.