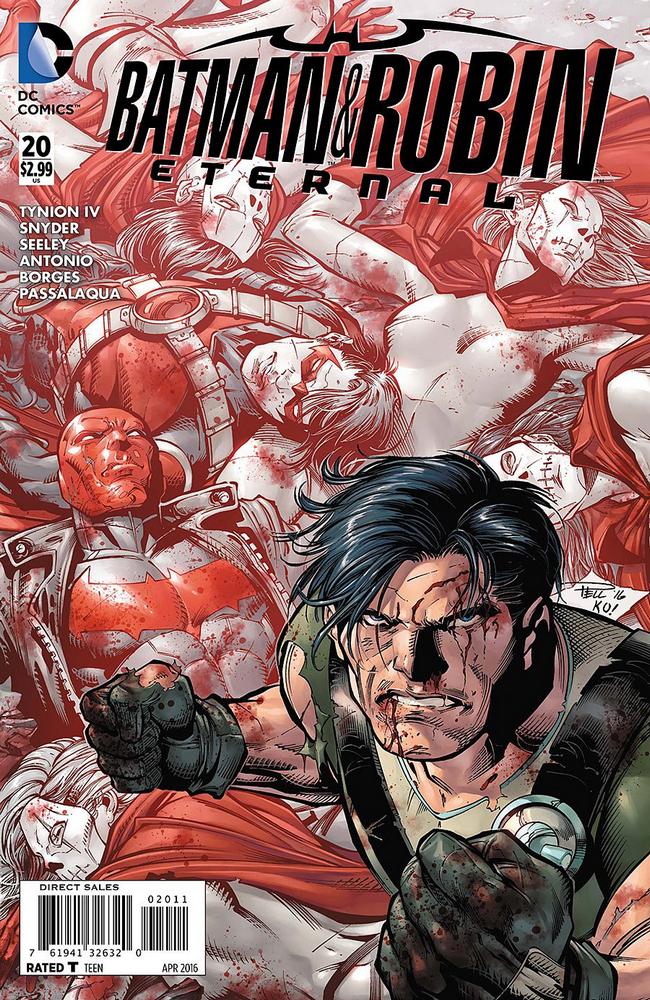 Mother’s rampaging children are raising hell as the Bat-family tries to reverse the mayhem and keep the young members from tearing each other apart.

Tynion, Snyder and Seeley bring this part of the arc to a close nicely, not drawing out this conflict any longer than it needs to be. The pacing of this issue is stronger than the last, though I do feel like this story is starting teetering on falling off the tracks. The conclusion of the issue features a couple characters getting away once again, with two high profile members of the Bat-clan in tow and things are really starting to feel like they are dragging on, just for the sake of continuing the story. This issue in and of itself is not poorly written or executed from a storytelling standpoint, the dialogue and pacing are on point, but when looked at in the whole of the weekly book thus far, some general themes are starting to get tired.

Seeley’s work with the characters is just fine, and he’s got a huge cast of varied voices to deal with. He handles each well, with Helena in particular stealing some great moments throughout the issue. This issue does highlight a weakness in the series as a whole though, in that issues with next to no influence from Batman or some progression or great stride toward the final conflict with Mother feel like they are stalling. The overall momentum of the series is given a boost by the final page, and that page alone is enough to keep me coming back for more to see where this is going.

Roge Antonio and Geraldo Borges are a significant upgrade on the art from from last issue and they provide solid work throughout. They nail the aforementioned final page, and there is some really good work throughout the issue. They had some panels where they could really cut loose with the Scarecrow’s fear toxin, and those images really work, in large part because of Allen Passalaqua’s colour work. The art gets the job done in this issue and the next time I see this team’s names in the rotation I won’t be disappointed.

Batman And Robin Eternal #20 caps off this chapter in the ongoing saga of Bat-family vs. Mother and brings a new dynamic into play that could be very interesting. This single issue is just fine, though it highlights some aspects that are becoming repetitive could become problematic as this series progresses. Here’s hoping the final page brings good tidings for Batman And Robin Eternal going forward.