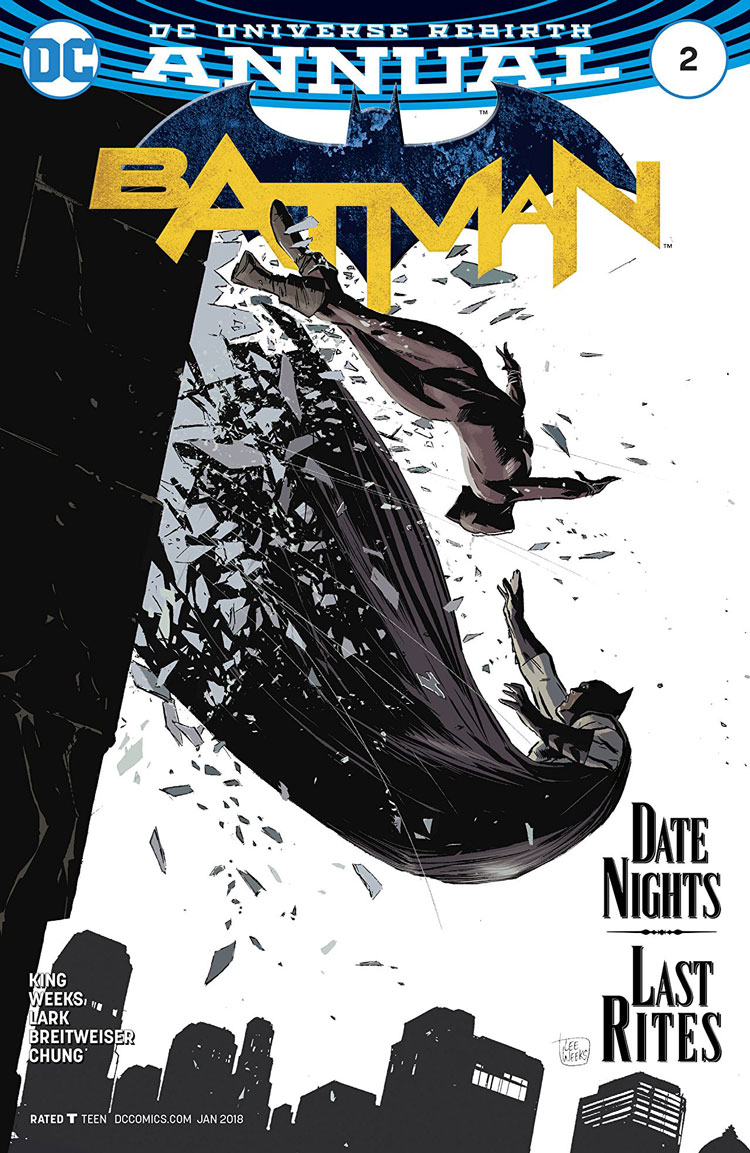 The Bat and The Cat.

Tom King has gradually re-established Bruce Wayne and Selina Kyle as a couple and beyond throughout his run and this Annual acts as a beginning and end look inside of their relationship and everything about it that works for these two damaged characters through time.

This Batman Annual arrives at a timely part of King’s run on Batman. In the main title, Bruce has proposed to Selina and they are both confident enough to go the extra length for one another. King has sprinkled bread crumbs of these two through moments across the thirty five issues and the Annual begins by rewinding the clock to the early days or rather, near the beginning.

Weeks and Breitweiser tackle the first half of the story with art and color that harkens this tale back to something close to Batman Year One. Catwoman opening up into the Batcave to go for a joy ride is met with Breitweiser’s light and darkness. Illuminating the dark figures of the Batmobile and Catwoman against the warmth of the lights and the single page of Catwoman revving up the Batmobile is just one of many moments that capture that youthful spring of Selina and the deceitful grin that doubles as a reason for the page to light up, starting this tale. Batman and Catwoman begin their age old “cat and mouse” game across Gotham City and Wayne Manor.

Weaving in and out of Batman and Catwoman, the Breitweiser colors give a noir and old school feeling. It’s filtered to the times and Weeks details the pages with optimal focus and detail. Batman looming large and fearless in the back alley after tying up a criminal. Paralleling his dry demeanor with panels of Catwoman living it up with her so called “joy ride” lines up the two and their two worlds nicely if you’re even remotely familiar with the two.

King sets the stage for long standing Batman related things in the mythos as he tries to piece together Catwoman’s game and her trail and calling card, which is a live mouse. The color work is saturated for the pages and goes deeper for the panels. Weeks detailed line work is honed even more from his time on the Batman/Elmer Fudd Special and keen eyed readers can spy a call back to his time on Elmer Fudd.

Moments with Bruce in Wayne Manor are rendered with care as Weeks navigates through a panel by panel process as Bruce himself goes through solving a riddle from another foe. The art team has really nailed the beginning of Batman with how each panel is a stepping stone that relates to the overall journey, nothing is wasted. It flows effortlessly and the coloring from Breitweiser is one of the real winners here, as the plot and moments change, the colors do naturally and the lighting retains its focus where it needs to.

A chase through Wayne Manor ensues that takes Bruce and the Cat (just out of view and off panel) through all of its halls and in the process King marks the beginning of a lover’s quarrel, they just don’t know it yet. King knows these characters and it’s shown from the brief exchanges. His Catwoman is smart, illusive, steps ahead of Bruce Wayne and knows exactly what she’s doing with some of the better pages focused on her.

As time pass, a type of redundancy between the Bat and the Cat begins as most romantic adventures between two intellectuals occur and it’s one of the most touching examples of their relationship. Weeks and Breitweiser fill in pages with depth and colors that isolate the characters to where you are taken along with them. King writes these two as two forces and deepens their relationship pass the “I Am Suicide” and “Rooftop” arc in the main title.

His take on Batman is that of an emotionally discharged man who isn’t quite sure what he is without the Bat and more personal than we’ve seen the character.

This Annual is the foundation for everything King has previously orchestrated and the two circle each other until Weeks pulls them in and sets up Breitweiser for the kill with the claustrophobic space that is isolated and defined by the color work that goes between filled out backgrounds of Wayne Manor and a single color that gives the character moment more feeling and humor.

In a moment that feels like a precursor to a page from “Rooftop” Weeks and Breitweiser gives us a page that sets Bat and Cat apart from everything else in the world and what’s to follow is some dialogue filled with so much loving, tenderness, and hurt with Weeks providing some wonderful dynamics as the two chase each other while saying their piece.

With each transition, King gets more romantic and every step of the way he ties it all together leaving no loose ends to ponder. He understands the tragedy that these people have been shaped by and uses that to tie them together and that’s why they are write for each other above all else. Batman and Catwoman understand each other behind the masks, behind the hurt and pain, and that’s why their love feels right and earned under his pen and especially appropriate with an art team like this.

If the first half of the Annual was the Alpha Batman and Catwoman Story, then the second half that shifts gears for Lark and Chung to take over is the Omega and it is by far one of the most humanizing and grand finales to Batman if there ever was one. Batman was the focus for the first part and now much, much later into the future we end with the woman that fell for the Bat.

King charts of the running jokes of his run into the narrative that makes it bittersweet with Lark art telling a story of two lovers reaching the end of their journey and Chung retains the grounded coolness to the colors that makes everything pop as it should and doesn’t take away from our two characters fighting a foe they can’t beat: Age.

Lark handles scenes allowing to show, not tell the emotional punches behind Bruce and Selina during this trying time. It’s a really moving sequence and it’s only two characters walking down the street, going down memory lane. Despite being in the future, this is entirely Batman focused in the regard we are settling in on saying the quiet last days of a relationship that has lasted several decades and into a future generation.

Bennett’s lettering is used subtlety outside of the normal instances, once again calling back to a simpler time in the annual through song for the Bat and the Cat that evokes all types of emotions given their journey and Lark sells every page with ease.

The closing pages of this annual can essentially be the finale to Tom King’s run on Batman. It’s the type of finale that honors what King has set up for his cast being the Bat Family and while there is a sense of going silently into that good night for our favorite character…it’s well deserved and right for him and his wife.

Batman Annual #2 is a love letter to two characters that deserve each other through the good, bad, and the ugly. It’s a poignant look into one of the biggest relationship in comics and King, Weeks, Breitweiser, Chung, and Bennett have essentially put their stamp and mark on the definitive Batman relationship. This Annual is something that can remind you what super-heroes can be when you put them under a microscope and hit home on not typical heroic flair and adventures just because but, who they are under the mask and what else is out there for them.

Whether you view this Annual as a companion piece to the main Batman title or solely as the beginning and realistic take on the end of a Batman relationship, this issue is from start to finish a beautiful drawn, emotionally driven comic that should be in your possession.