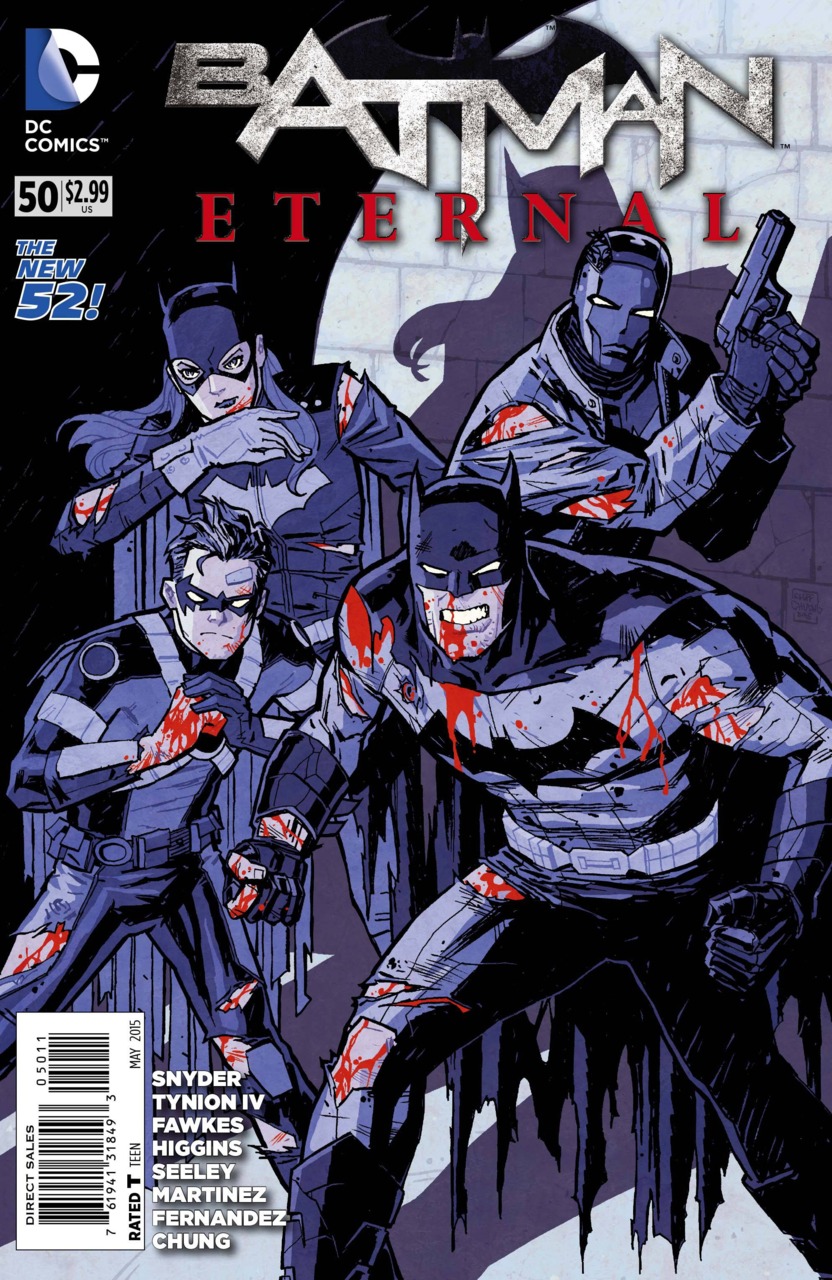 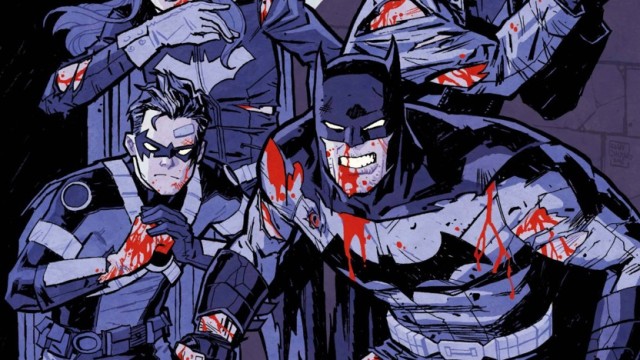 As the end nears for this yearlong weekly series, Batman finally faces the villain who might just be his biggest challenge yet. Not The Lion, not Hush, not the Riddler, and not Ra’s al Ghul — but the man who’s brought Gotham City to its knees, in flames, and its heroes with it. If Batman and Jim Gordon are going to survive this, it’s going to take every asset they have.

The interesting thing about the entire run of Batman Eternal is its consistency. While artists rotated in (a full issue at a time), they rarely seemed to clash significantly. Had one not taken notice of the writer on script with each issue, I daresay it would be nearly impossible to tell who was writing what. There are no sharp page divisions, or abbreviated flashes of action that are over before you even know they’ve been done. Just smooth storytelling from issue to issue, taking us from Jim Gordon’s shooting to now.

It’s been a treacherous path — winding and exhausting at times — but what’s pretty clear in this issue is that’s exactly how it’s been for Batman as well. In the modern age, facing off against the Joker and the Court of Owls, The Dark Knight has one emotion — exasperation — that is extremely rare to witness. And we’re getting it here in spades. When the World’s Greatest Detective gets outwitted, you know you’re in for a great explanation. Tynion and company have set us up for that in this issue with grand style.

While the story touches on almost every close member of the Bat-family at this time — Penny One and Two, Batgirl, Red Hood, Batwing, Red Robin, Bluebird, and the Spoiler — as well as Jim Gordon’s new prison break crew, the action doesn’t feel jumbled or rushed. The throughline, of course, is Batman and Gordon, and how they face the enormity of the situation — whether it’s a city on fire or the realization that someone, for once, got the better of Bruce Wayne.

Alvaro Martinez steals the show with his uber-clean and wonderfully dynamic pencils. This issue is a particularly excellent showcase for his talents, given the large number of characters he had to juggle — and did so flawlessly. Red Robin is fluid like an acrobat should be, The Scarecrow super creepy, and Jim Gordon at his most stoic. For an artist who has only one other DC Comics credit under his belt, Martinez leaves me dying to know when his next book will drop.

One of my favorite issues to date of the series that’s speeding toward its end on perfect pace, Batman Eternal #50 has given the final two issues a set-up that leave me itching for next Wednesday. Here’s hoping season two launches with the same crew on creative sooner rather than later.