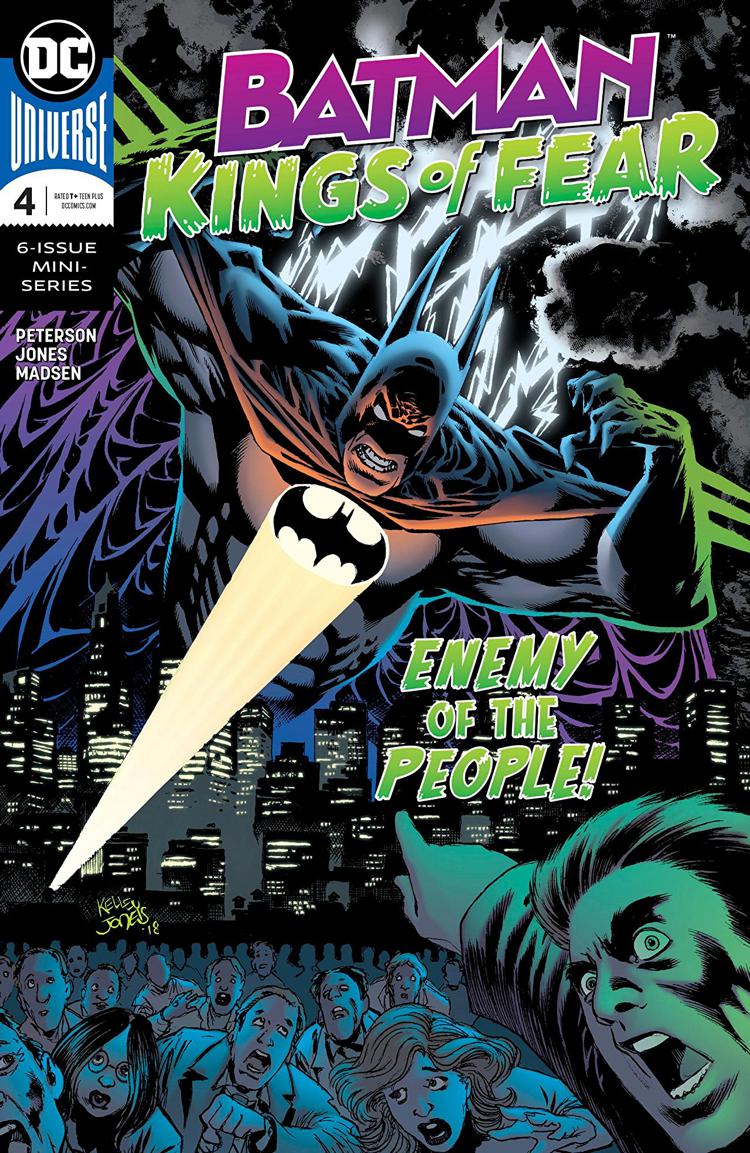 Bruce Wayne is clearly the mask and Batman is the true identity of this character. Countless stories reveal this to be certain and Scott Peterson’s part four of this limited series. Filled with more diving into the psyche of a troubled Batman and the stellar and terrifying art by the creative team of Kelley Jones, Michelle Madsen and Rob Leigh, this comic is all about why Batman IS Batman and whether or not this is a good thing for his well being.

Dr. Crane aka Scarecrow now has Batman on the therapy couch and is digging within the dark crevices of the Caped Crusader’s mind, getting him to spill what makes him tick. While Batman’s realization of his world is crumbling, so are the people of Gotham’s view of their vigilante savior.

I would figure most heroes want to save everyone, or as many of those in trouble as they can. Peterson shows that all Batman wants is to assure no child goes through what he went through with the death of his parents in Crime Alley so many years ago. While this seems to be a simple task, that means saving and protecting every child – an unrealistic expectation to say the least. In following this goal, courtesy of Jones, Madsen and Leigh’s amazing illustrations, Peterson was able to highlight Batman’s thought process that he is THE superhero of his city, of all Gothamites. However, no matter if he perceives this to be so, the people of his home may not be as accepting of his help, which makes Batman question his whole crusade.

As Scarecrow continually manipulates the Dark Avenger’s mind with his dangerous fear toxin, Peterson does a brilliant breakdown of Batman’s psyche; it continues to peel back the layers like an onion, proving that his vision of justice is, never ending, practically impossible and borderline lethal.

The Signal of Hope and Despair

As Peterson writes about the fear that Scarecrow is bringing out of Batman as he walks through his darkest memories and unattainable desires, Kelley Jones amplifies this horror the Dark Knight is personally facing on every page. So many moments stood out in this issue: Batman’s facial expression of the cowl as he remembers the night of his mother and father’s murder, the glowing demented orange eyes and frayed noose of the Scarecrow and the haunting shimmer of the Bat signal in the sky.

Every literal brush of darkness that creeps into every panel makes Bruce’s look inside himself just as terrifying for the reader as it is for him. For a tale needing to permeate fear, an artistic team such as this presents emotion and dark beauty with every page.

Is There Gotham Without Batman?

While I wish this series would be longer than six issues, I’m curious to see how part five presents itself after that shocking last page. Peterson and Jones continue to put out an amazing Scarecrow tale, a very under-appreciated villain that I’m so glad see get the attention he deserves. Any rogue that pushes Batman to his limits mentally is one that this character need to go toe to toe with to better himself for the fight against evil he desperately wants to win.