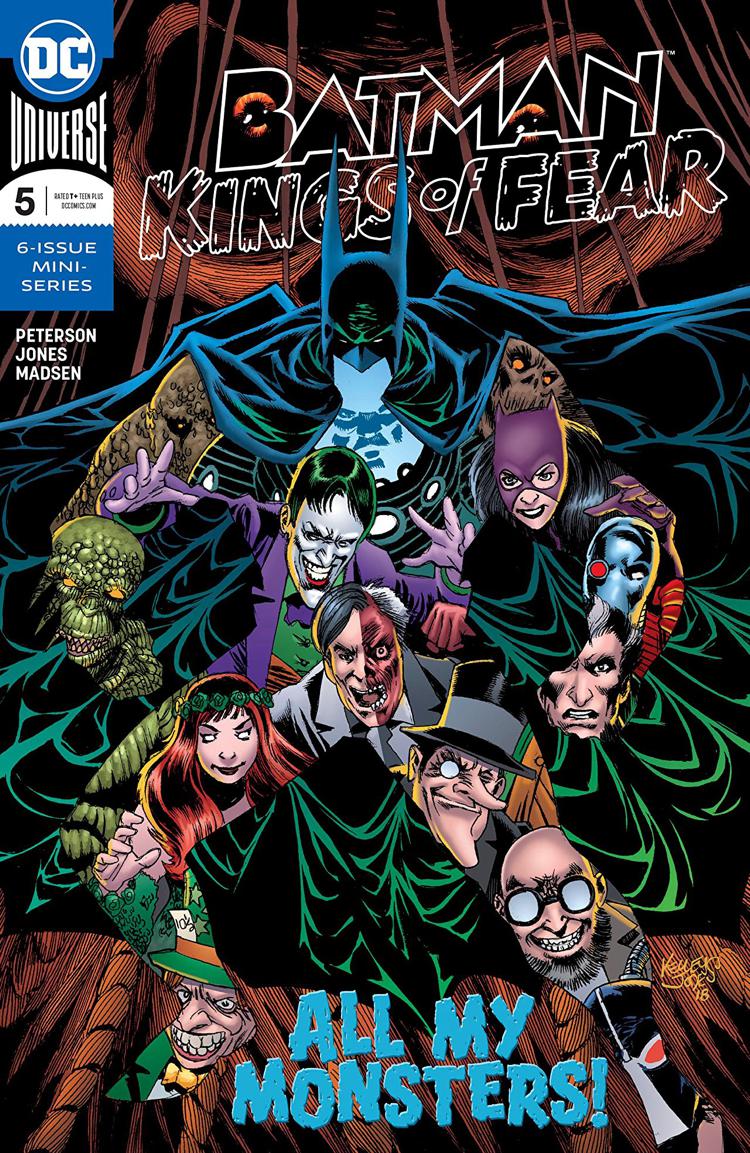 Part Five of this limited series presents the question that anyone who knows Batman and his story has asked once or twice: What would life be like without the Dark Knight? Scott Peterson and Kelley Jones answers this classic question with a brilliant and refreshing breaks down that even makes the reader wonder if this fan favorite hero is a necessity for a damaged city such as Gotham.

There’s So Much One Man Can Do.

As Scarecrow continues his analysis on Batman, he presents a reality where Batman doesn’t exist and what that exactly would mean for not just him but everyone the Caped Crusader comes in contact with, evidently questioning his own purpose.

Batman throughout the decades has always been presented as a necessity to keeping Gotham safe from criminals from low level thugs to the infamous rogues gallery. While there have been stories that wonder what this reality would be like if Batman wasn’t around, Peterson’s extremely detailed look into how the citizens, good and bad, of this tragic city would thrive for the better is spectacular.

What makes this examination greater is the effect that it has on Batman himself. The range of emotions Bats experiences, realizing what a world without his crusade for justice could possibly be and what he could have done with his immense resources (something Alfred has told him c o u n t l e s s times, but I digress), is almost heartbreaking to see. While seeing the Batman have an existential crisis is hard, I personally applaud Peterson presenting this “what if” scenario with intrigue and impact.

The Aesthetic of Internal Crisis

This issue was pact with not just emotion but also a dynamic look at Batman’s rogues gallery, their current state as villains and their almost “Elseworlds” like look as a positive contributor to society. The artistic highlights of this issue definitely comes into looking at a “reformed” Gotham and its Gothamites, considering long time readers have a set concept of what these 75+ year old characters look like in comics, television and film.

Kelley Jones being one of the ‘Kings of Fear’ himself through his wonderful artwork brings out the fear and doubt Batman harbors in his soul as he sees what Gotham could be all while keeping the visually exaggerated and moody Dark Knight readers can expect from the creative team of Jones, Michelle Madsen and Rob Leigh.

I’m literally devastated the next issue will be the last of Peterson and Jones’ Batman: Kings of Fear. Nevertheless, I’ll push my sadness to the side and focus on the absolute joy I’ve had reading this new dark and twisted look into the mind of Batman. The last page brings me major anxiety but huge anticipation as to how this Dynamic Duo of Bat-horror will close out this short story. Will Batman shake off the god of fear or will he have his fear and insecurities succumb him? I cannot WAIT to find out!!