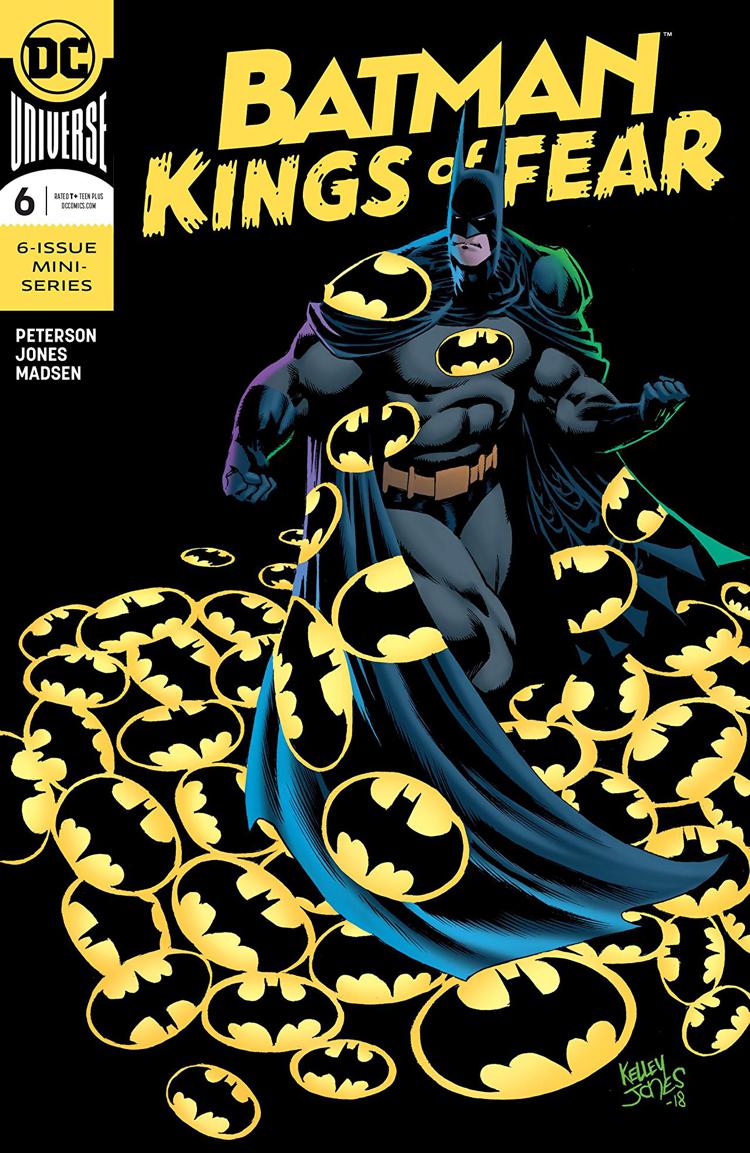 Scott Peterson and Kelley Jones’ miniseries comes to a powerful close. This ending means more than apprehending the villain. Batman is confronted by both strangers and loved ones who reassure his role as the protector of Gotham, which is an evaluation that from time to time is a treat and a necessity to observe when learning more about the Dark Knight’s troubled psyche. This final issue highlights the question: Who, or what is the true king of fear?

Batman confronts Scarecrow after the self proclaimed God of Fear gave his own psychic evaluation, which turns into the Caped Crusader’s own self reflection of his vigilante purpose within Gotham City.

I deeply appreciate Peterson’s writing in this finale more-so because the reader is given several points of view of how people see the Batman and his role in Gotham. If you examine the Scarecrow and Alfred Pennyworth, both can represent how both good and evil see the Caped Crusader for Gotham. For the Scarecrow, he rationalizes in his own villainous way that having Batman around is a hindrance to the City. Whereas Alfred, the trusted surrogate father to Bruce Wayne, despite his contempt for the mantle, knows what Batman does for his lifetime home is more important than his hatred for what it physically and mentally does to his son.

From these revelations from several different Gothamites to Batman’s own reflection on if Gotham City needs a vigilante hero, Peterson’s ‘Kings of Fear’ ultimately illustrates the insecurities and fears that harbor inside of Bruce Wayne. The series goes beyond the death of Bruce’s parents many years ago; Batman’s Ultimate fear is not fulfilling his destiny as Gotham’s Dark Avenger and in this arc he ultimately overcoming this fear.

Fear is the Shade of Gotham

Certain pages definitely were visually awe inspiring, from Batman’s internal dialogue taking up several neighboring panels (Leigh’s work is absolutely brilliant here) to the Bat signal eerily reflecting on the Gotham River. Jones’s expressive and fittingly dramatic pencils and Madsen’s matted but colorful palette, that shines especially across a troubled Batman, captures the true shadows of horror seen in comic works by Wrightson, Totleben, Mignola, Ingels and many other greats, making “Batman: Kings of Fear” both an instant Batman and horror classic within the comics medium.

The Once and Future King

Peterson and Jones’ “Kings of Fear” was a wonderful roller coaster of learning more about what makes Batman the hero he is and wants to be for Gotham. This arc is now one of my favorite Scarecrow stories (who is such an underrated villain) and falls in line with classics like Darwyn Cooke’s ‘Batman: Ego’. Any book that is so self reflective of the title hero and gives an honest look, for better or for worse, at if his vigilantism is a necessity is a series I would recommend to any Bat fan. The trade paperback is out this August and I cannot wait to pick it up to have in my collection.