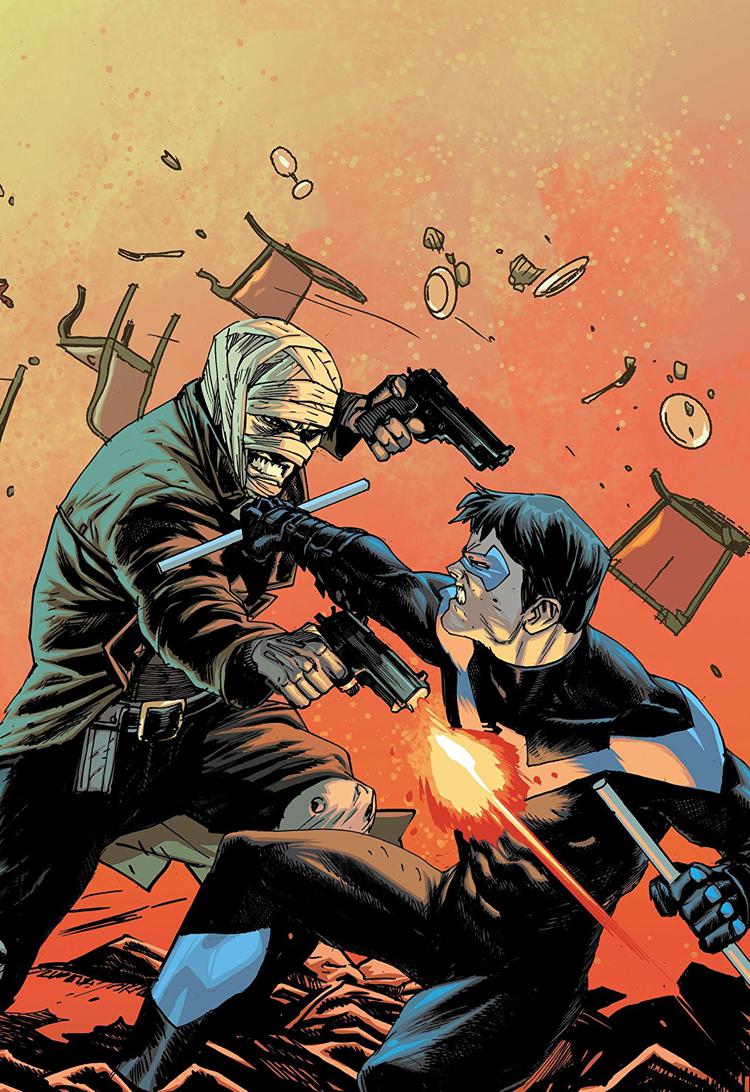 I know it’s fun for many fans to have the debate of “Batman vs Superman” but these BFF’s don’t have time for such trivial fights…it’s wedding season! Tim Seeley and Travis Moore’s Part Two of this prelude to Batman and Catwoman’s wedding is all about friendships, whether it be reviving old ones or making peace with others that have ended.

“The Hangover” For The Multiverse

Even when you’re superheroes, traditions never die. A fun night of food, friends and multidimensional travel turns lethal when Superman, Nightwing and Batman run into the villain Hush who crashes Bat’s Bachelor party. Before Hush decides to ruin their night, Seeley provides some of the lightest banter in the first several pages of this story between Clark, Dick and even Bruce who begrudgingly can’t resist cracking a smile or two. Their opening dialogue cements the trio’s bond that’s not so commonly reflected upon in stories purely filled with intense drama and fighting.

Even when Tommy Elliot rolls in with blazing gunfire, Batman and Nightwing still work together to potentially take down Hush. But a literal misfire sends both Hush and Nightwing to a place where comfort and confidence are the only weapons to defeat this particular threat. While the two are trying to return home, Grayson learns more about Elliot’s grudges and his anger issues with Bruce (and how he didn’t get an invite to the wedding which…he stole the bride’s actual heart at one point so…I’m not sure why this is a shocker). Fighting oddly enough turns into a heart to heart and a reveal even Nightwing at this point in his very exciting career in both Gotham City and Bludhaven wasn’t expecting.

Although the issue focuses on the battle between Hush and Nightwing, this was another great piece examining Dick Grayson’s relationship with Bruce, his father figure / crime fighting mentor, and him wanting to not be so far away from the Dark Knight anymore.

From the paneling to the shift in tone between dialogue, Travis Moore’s illustrations are a fun ride in this crazy issue filled with friends and foes. Anytime you see Batman smile it feels like Christmas because it seems both a once a year type of occurrence and it’s such a joy seeing Moore able to draw him in a happy place several times in this story.

Another great sequence comes in the finale fight between Hush and Nightwing; it isn’t just the fluid movement of punches and kicks but also the emotions that both are dealing with and wearing right on their sleeves (and face…which is a whole can of worms on its own). Moore’s pencils and Bonvillain’s brilliant colors make for a visually exciting read and goes fantastic with Seeley’s story.

One Wedding and Probably Four Funerals

Batman’s happiness can definitely be because he’s getting married to the woman he loves, which makes these prelude issues showing both Selina and Bruce’s joy even more enjoyable. But as with most Batman stories, there’s always a villain looming in the shadows and no matter how great of a time the Caped Crusader and his family may have, the good times may not last for long. Part Three needs to get here fast!