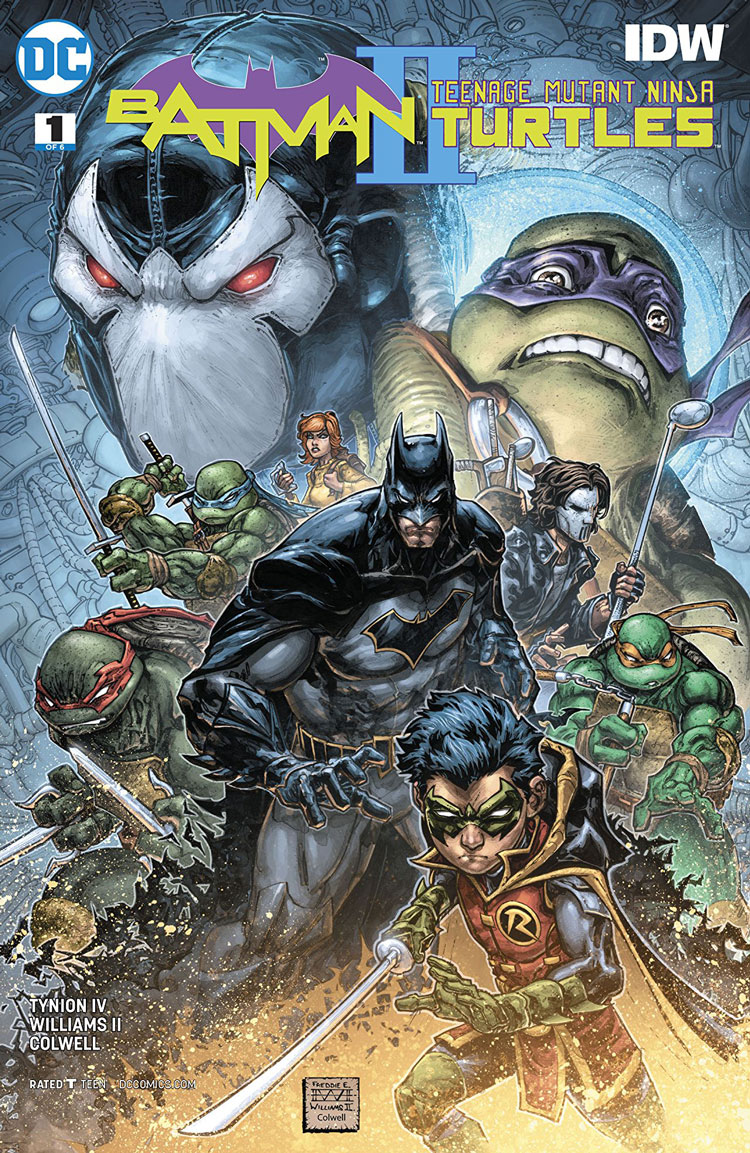 There are few things as enjoyable as a cross-over comic that not only meets expectations, but exceeds them. IDW’s 2015-2016 Batman and TMNT crossover was a comic idea that was always destined to at least be “ok,” but it was amazing to see the idea unfold into something that managed to be “great.”

B/TMNT II picks up months after the conclusion of the first series, with Ras and Shredder’s alliance having left the Foot Clan leaderless. Now, multiple factions vie for power within the Foot: Karai, Beebop and Rocksteady, and Shredder’s elite guard. The three-way war is less of the dominant issue when the story starts, but it is the catalyst in the TMNT universe to show Donatello undergoing an emotional crisis.

After a scuffle with some of Shredder’s elite guard, the tech genius of the turtle family wonders if there is a way to be both physically strong and technologically capable. Personally, I get the feeling this crisis was something fabricated as the reason to initiate ‘why’ one of the turtles would try and contact Bruce again, but the beating Donnie received was presented as dramatic enough that (despite being a tad cliche) it works to get the plot moving.

In the Batman universe, the threat of the League of Shadows as grown greater than usual since, unbeknownst to Batman, there is Lazarus Pit beneath Gotham. Because of course there is. The League decided to work with Bane and it is up to Batman and Damien to intercept Bane before he can bathe in the Lazarus Pit’s waters.

Obviously, things to sideways, but that is where this kind of a comic thrives and functions best.

Batman/Teenage Mutant Ninja Turtles II is a good start to what was previously a great comic. Outside of the madcap nature of Tynion’s ability to capture some of the best elements of Batman, the first series was excellent because of Williams II and his unique art style.

This new run of the Bat/TMNT crossover is no different. Firing on all cylinders, Williams II showcases a fantastic sense of motion and an impeccable sense of how to present emotion through the facial shapes of the turtles. One of the opening sequences with Donatello and the Shredder guard is great because the dynamic range of motion depicted is spot-on.

The panel work intermixes standard ‘straight’ line-styles, as well as jagged, ink-like borders. The transitions between panels and the solid artistic delivery of Williams II show how IDW hit the jackpot with the first run of this crossover and they’re eager to capture lightning in a bottle again.

Of course, the art of Williams II is only enhanced by the colors of Colwell. The gritty, urban sewers of NYC are captured in their dark palettes of silver, black and grey. Contrasting these dark color sets are the turtles themselves, with their muted, yet still iconic, color schemes. While IDW’s color styling for this series are darker than some renditions of the Turtles settings, nothing is out of place in IDW’s Gotham.

While the Bat-verse’s sequences are less key than the NYC ones for this first issue, they’re still great. Unlike the NYC segments, the Lazarus Pit scenery allows for a more robust use of greens during one of the more dramatic sections.

In summary, this is hopefully going to be the start of another great IDW series. While it has a high bar to surpass with the first run of the Batman/TMNT crossover, Tynion, Williams and Colwell are off to a good start.