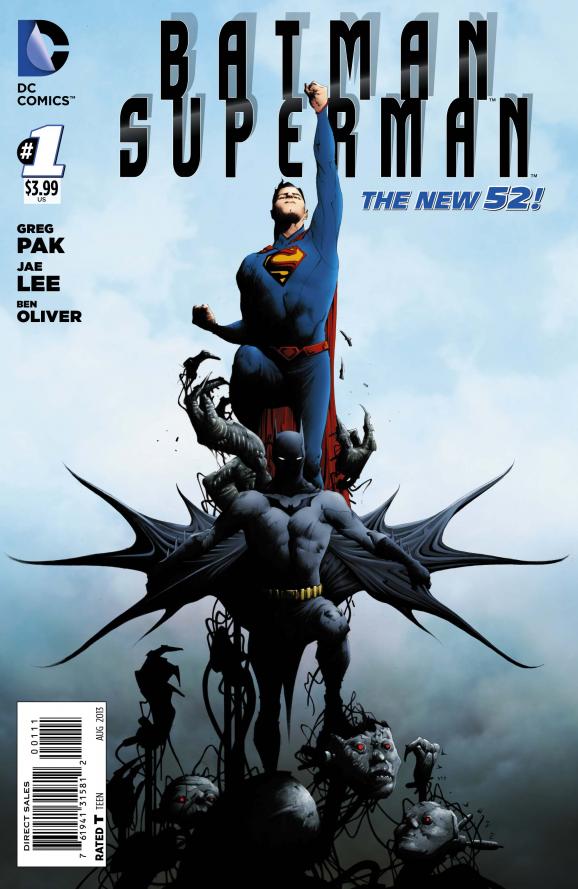 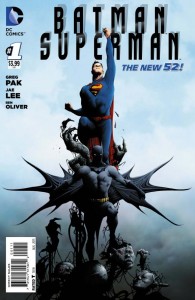 It’s the first meeting of the Man of Steel and the Dark Knight in the New 52, and it’s probably not a significant spoiler to say that they have a long way to go yet before becoming the best of friends and colleagues. Set “years ago,” Clark and Bruce are drawn together by a mutual interest in a murder case, and the sparks fly pretty much immediately. Throw Catwoman into the mix, and you have an instant recipe for adventure.

This book has been high on a lot of fans’ want lists since being announced as it represents the return of artist Jae Lee to a monthly ongoing series, his first such since his run on 2003’s Captain America. While we were treated to his work on the Before Watchmen: Ozymandias mini-series earlier this year, the potential to see page after page of monthly output from Lee is extremely alluring, and Batman/Superman certainly delivers on that initial promise.

While returning to a much darker tone for this issue than we experienced with Ozymandias, nothing is lost in the detail and intricacy that Lee creates on the page so majestically. His Gotham City is so unique among all iterations to date — almost a Middle Eastern capital city of dark splendor — that I would worry it was too far afield for most fans if it wasn’t so damn gorgeous. His Batman is every bit the living extensions of the shadows in the city, almost wraith-like in his motion across the page, particularly in contrast to Lee’s more stoic Superman. Both Clark and Superman stand out, of course, against the grim surroundings, and interestingly enough, Batman’s arrival in Metropolis seems to transform the usually bright city into a dark mirror of itself, perhaps foreshadowing the ultimate turn of the story. Smartly, the two protagonists never quite get lost in their surroundings, as Lee turns his attention squarely on the costumed combatants as soon as they abandon the pretense of their respective daytime disguises.

It’s a beautiful issue all around, and one you could easily spend a great deal of time marveling over, even those pages completed by the more sketched style of second artist Ben Oliver. While it may not be ideal to have two separate artists on an inaugural issue of such a high-profile book, the division of labor here works to the story’s advantage, shifting at a critical turning point.

Pak’s story is not terribly complicated, as the writer seems to set up Lee for maximum success, not overburdening him with anything beyond that which is precisely necessary. It’s a difficult balance for most writers to let their artist tell the story for them to such a degree, but rather than leaving me feeling like the story is shallow, I’m appreciative of the restraint exhibited so that I’m able to feel the story as much as, if not more than, read it. The juxtaposition Pak is setting up regarding the two men and their fathers is very poetic, and something that seems to immediately create an intimate relationship between Clark and Bruce, even as they are trading jabs. The true antagonist, of course, remains very much a mystery, but again, I’m not terribly troubled by that. What villain can be more than a MacGuffin for this title to be honest? We came to see Batman and Superman. All else pales in comparison.

A knock-out gorgeous first issue of what I hope continues to be a slightly more psychological take on the relationship between DC’s top two heroes, Batman/Superman #1 is, at $3.99, worth every penny, a rarity in comic purchasing today. Without question, any reader could pour over this book multiple times and still come away with new details and nuances with every page turn. How many books can we say that about these days?