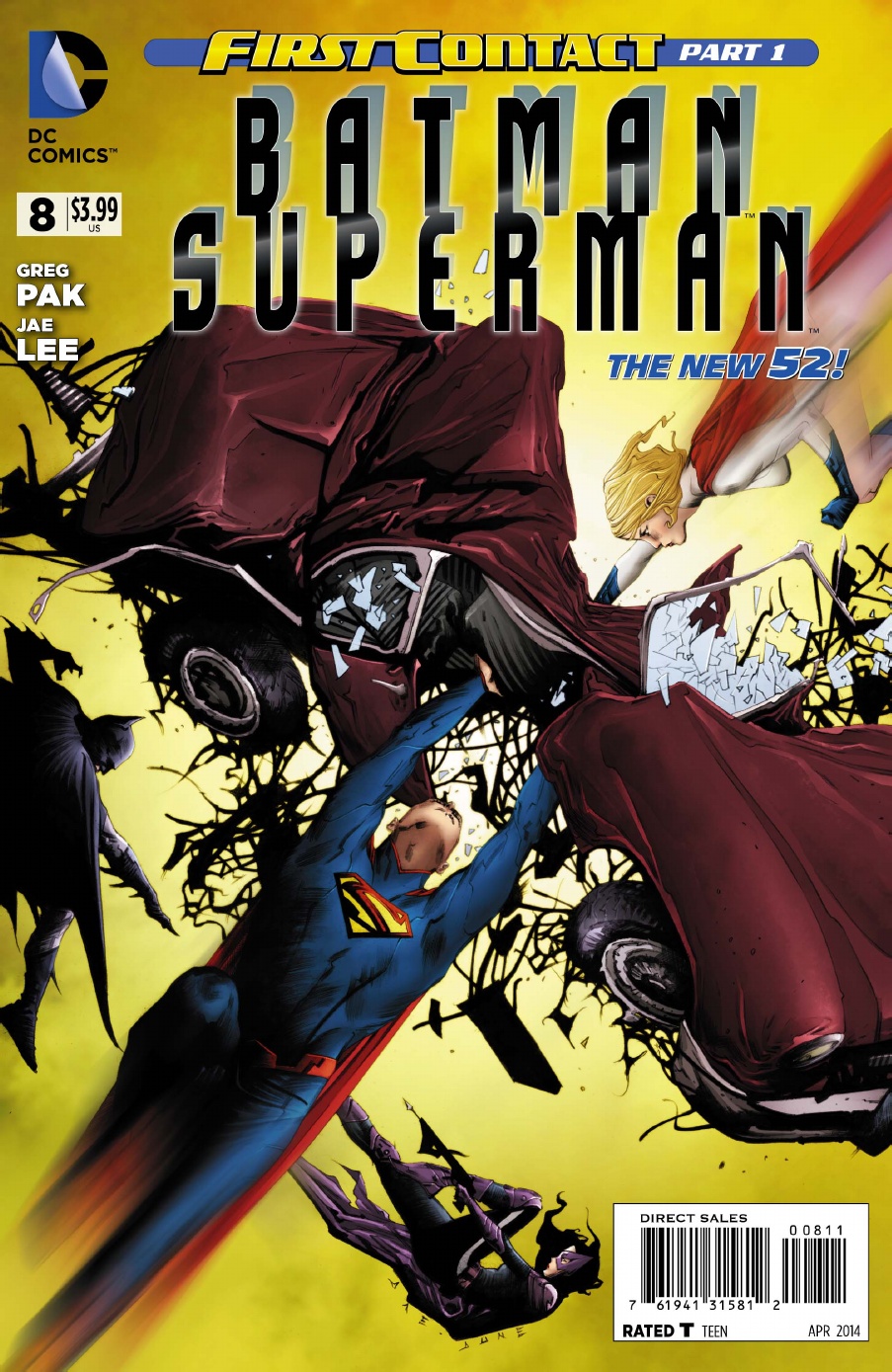 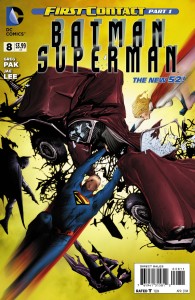 Revelations abound as the Prime Earth Superman and Batman finally come face-to-face with the Earth 2 Supergirl and Robin — otherwise known as Power Girl and the Huntress, our new Worlds’ Finest team. Something is messing with Power Girl’s power, and… um… huh.

OK. I can’t even pretend to be able to write this review without gushing. I was going to try and it just didn’t happen. No, sir. It didn’t.

Let’s break it down, shall we? First off, the obvious: Jae Lee has returned to monthly duties on Batman/Superman after a three-issue sabbatical and WOW. If you thought his handling of the Earth 2 Superman and Batman was unbelievable, you need to see his take on their protégées. Each woman radiates a unique quality that is at once beautiful, embodies strength, and still manages to make her likeable and admirable. Huntress appears much younger than I’m used to seeing her, and it so perfectly fits, as she epitomizes everything that the daughter of the world’s greatest detective would be at that age — talented and wise beyond her years, in control, but still exuding some serious charm. I literally have never seen Helena so so SO beautifully drawn. This is truly the daughter of two of the super-hero set’s most eligible vigilantes.

The movement throughout the issue is exemplary, with Lee playing up his usual kinetic layouts, and it just amazes me to be able to see so much grace in every panel. It’s like the characters are dancing across the page, particularly Power Girl, as she deals with her current explosive condition. And that full page shot of Superman saving the dog? Priceless. The dog’s expression alone is worth the price of admission, but the manner in which Lee captures the S-shield at the center of the frame with rays radiating out, it’s just masterful. I honestly could frame any single page of this issue and never get tired of staring.

What’s even more delightful, however, is the script, as Greg Pak captures the very best side of each of the four main characters and plays them off of each other in such wonderful moments. The care Kal takes with Karen, Karen’s brash response to his approach, Batman’s cautious acceptance (despite his best intentions), and Helena’s sheer skill and matter-of-fact pluck in the face of her father’s double — all of these expressions of personality weave together to make an exceptional character piece, and a moment well worth having waited for. Every hero has a unique maturity, and Pak makes sure to let no one character’s portrayal suffer for the benefit of another — not always the easiest thing to do with Batman in play. Both Superman and the Huntress stand as equals to the Dark Knight, and the sides they bring out in Bruce only makes him a richer character.

Hands down, the best portrayal of Huntress and Power Girl yet seen in the New 52, Batman/Superman #8 is an incredible start to what I hope will be a story filled with tons of these types of moments. Sure, there’s a villainous threat to be dealt with, but what really will piece together this narrative — and make this encounter an instant classic — is the care given to the little interactions. This is what being the worlds’ finest is all about, people.