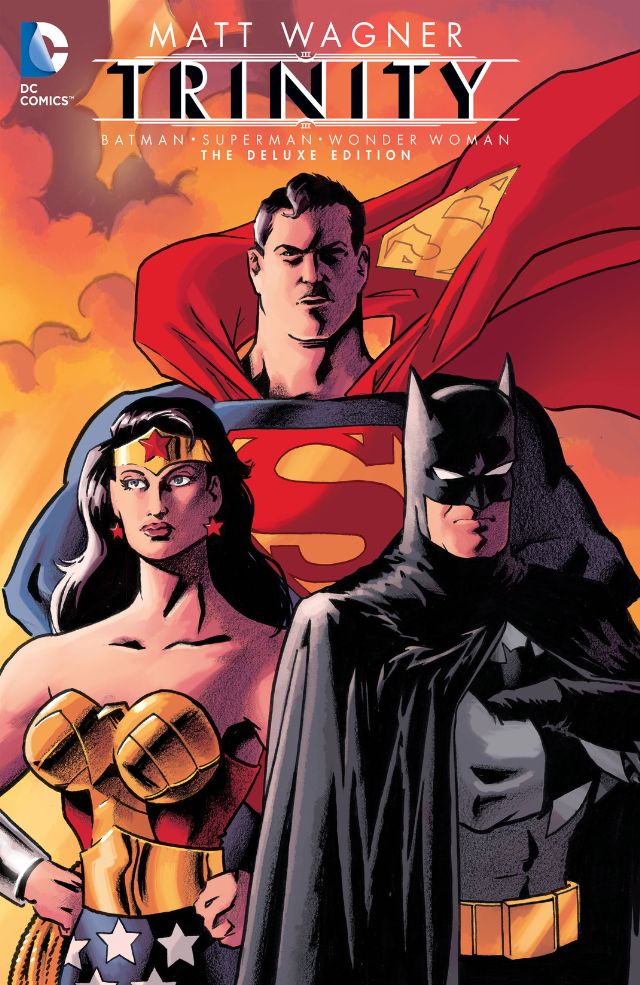 In the earliest days of the DC Universe, three gods stand among men and faced mirror-image foes — and each other — for the survival of the globe. They are larger than life, and yet each incredibly human. They are the Trinity: Batman, Superman, and Wonder Woman. And this is how they came to work together.

In the days leading up to the Batman vs. Superman film release this March, we’re going to be seeing a lot of books hitting the shelf that feature its core heroes. Most of them will feature the two titans. Few will feature Wonder Woman, unless it’s a solo book. But one gem, written and drawn by a literal comic book master, should not be overlooked, especially given the deluxe format of its new release. Yes, Trinity is that perfect book for fans of BvS. And I’d be surprised if it wasn’t a considerable amount of inspiration in the process.

Originally published in 2003, the Trinity 3-part series is one of the few in DC’s history that, rather than functioning as an extension of the Justice League, starred these three icons in absolutely equal measure in a single title. Wonder Woman is no guest star. Batman is not swinging across Gotham with his Amazing Friends. This is a book that truly looks at the beginnings of their relationships with each other.

And along those lines, Wagner has a lot of latitude. Setting the title in the characters’ very nebulously set “early days,” we get a proto-Golden Age adventure with personalities far outside what the heroes would grow into, both individually and in bouncing off one another. Superman is probably the closest to his classic self, stoically good and cautious about his prowess. He is human in his earnestness, certainly, but lacking the impetuousness and inexperience of youth we sometimes see in other early days recreations. It’s a surprising contrast, in fact, to Batman’s portrayal as much more impatient and snappish than we’re used to in the aged Dark Knight. Batman here definitely reflects a comparable inexperience and aggressiveness that we don’t see very often, and it almost is a combination of some true Golden Age bravado and perhaps some post-Dark Knight Miller (misplaced) self-assuredness without the cragginess of age attached. 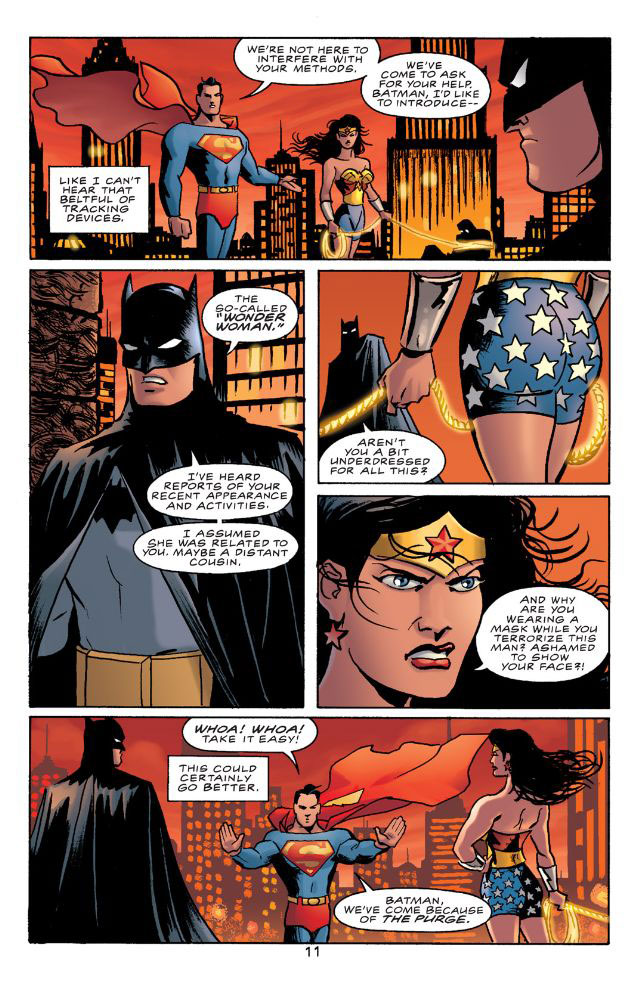 Where Wagner takes a most curious turn, however, is with Diana, who does absolutely have a powerful regality to her attitude and attributes, but comes off as presented through a decidedly masculine lens. It’s a fairly unusual perspective for me on the Amazon Princess, as even male writers of the past 10 years have imbued Wonder Woman with POV that still felt very woman-centered. But here, the language she uses, the threats she’s made to endure, make it very difficult for me not to see her being written as what men think should make a woman powerful, not so much how a woman would carry herself.

Part of it is her lack of subtlety and diplomacy in speech that causes her to aggressively clash with language rather than meet the other two heroes on an even keel. Her perspective and the speed at which she makes decisions doesn’t seem impetuous so much as has disregard for alternatives, and that’s not really the power that a woman like Diana understands to be fruitful. It’s a barreling over her counterparts that comes off as distinctly male in vision.

Likewise, the threat of rape from Ra’s Al Ghul feels gratuitous, not in the sense that an evil man shouldn’t threaten evil things, but that it’s framed as something that stops Wonder Woman in her emotional tracks. It doesn’t make her angry. It doesn’t spur her to fight back. It’s an odd add to a story that I think causes it to grind to a halt, and once again makes me comment, “If you can’t write about rape with a complexity it deserves, maybe you shouldn’t be writing about it.” It’s a far cry from saying, “Never write about rape.” but it definitely begs the question, “Are you qualified to do so?” Here, I ask that question. 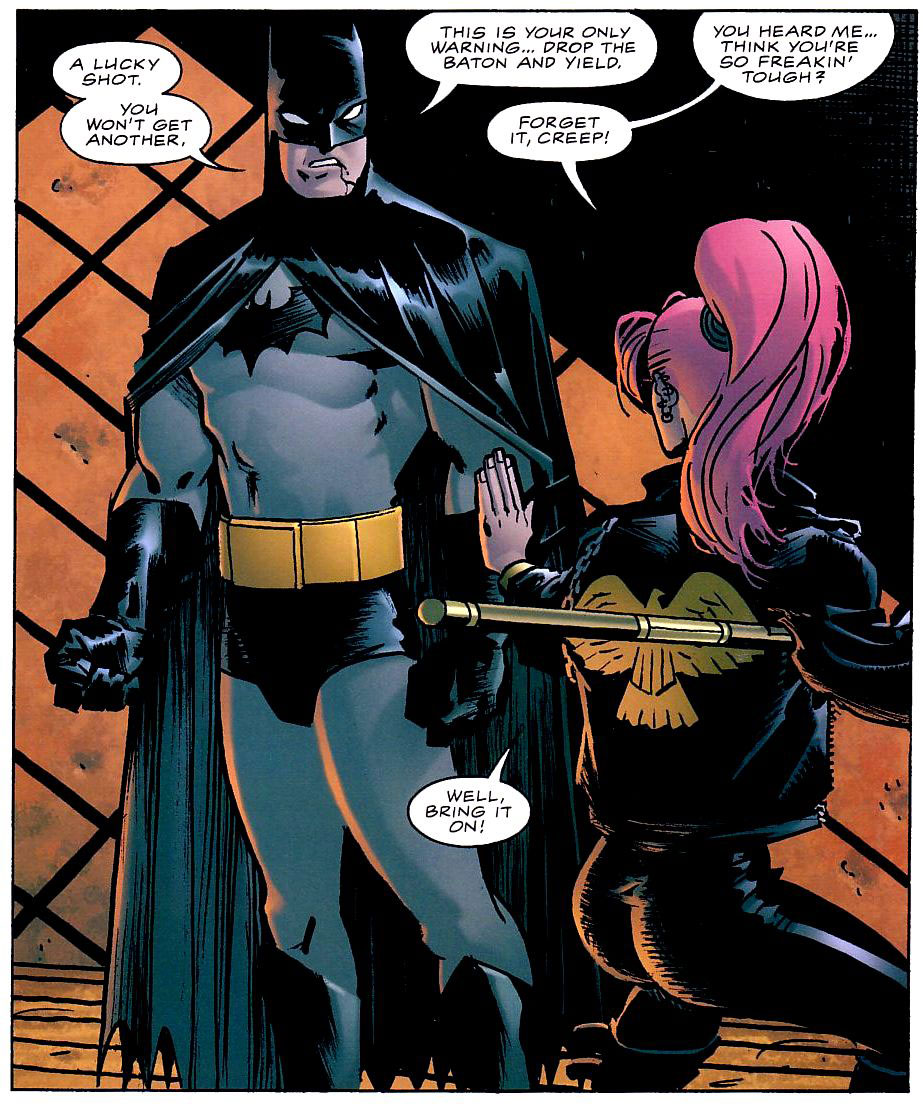 Nevertheless, we do get a strong adventure delivered across an extra-large hardcover that not only pits the personalities of Superman, Batman, and Wonder Woman against each other (although not, effectively, as physical confrontations in the least), but also brings in their mirror counterparts. The extra layer of the Trinity’s dark selves — Bizarro, the unintelligent powerhouse; Ra’s Al Ghul, the amoral genius; and Artemis, the Amazon without self-confidence — is a clever refraction on the big three heroes themselves. These are, but for a key lack in each case, where each one could have been in different circumstances. And those reveals, punctuated by the stand-offs with the genuine heroes, makes for a complicated interplay that’s fascinating to think about.

Wagner’s art throughout is, not surprisingly, sublime, with his clean, thick ink style mimicking early super-hero comic books for their fast-paced simplicity without losing any of the subtlety of gesture artists today command. The heroes feel stripped down to their roots, almost agnostic of Wagner’s manipulation, like pure concepts thrown out onto the page. All three have a great deal of musculature at play that gives their bodies a weight without making the page feel heavy. And Dave Stewart’s bold and bright colors are the perfect finishing touches on what is overall an exceptionally cohesive and engaging art experience.

With so much press and attention hitting DC’s top three tier in the coming months, a lot of people will be asking, “What do I give that friend who wants to read more?” I adore a Scott Snyder-Greg Capullo Batman trade. I am already grabbing up copies of Renee de Liz’s Legend of Wonder Woman series. And you can’t go wrong with a classic John Byrne Superman tome. But if you want to get someone into the idea of these three heroes as a unit? There’s nothing better than Trinity. This deluxe edition is certainly the package to beat.