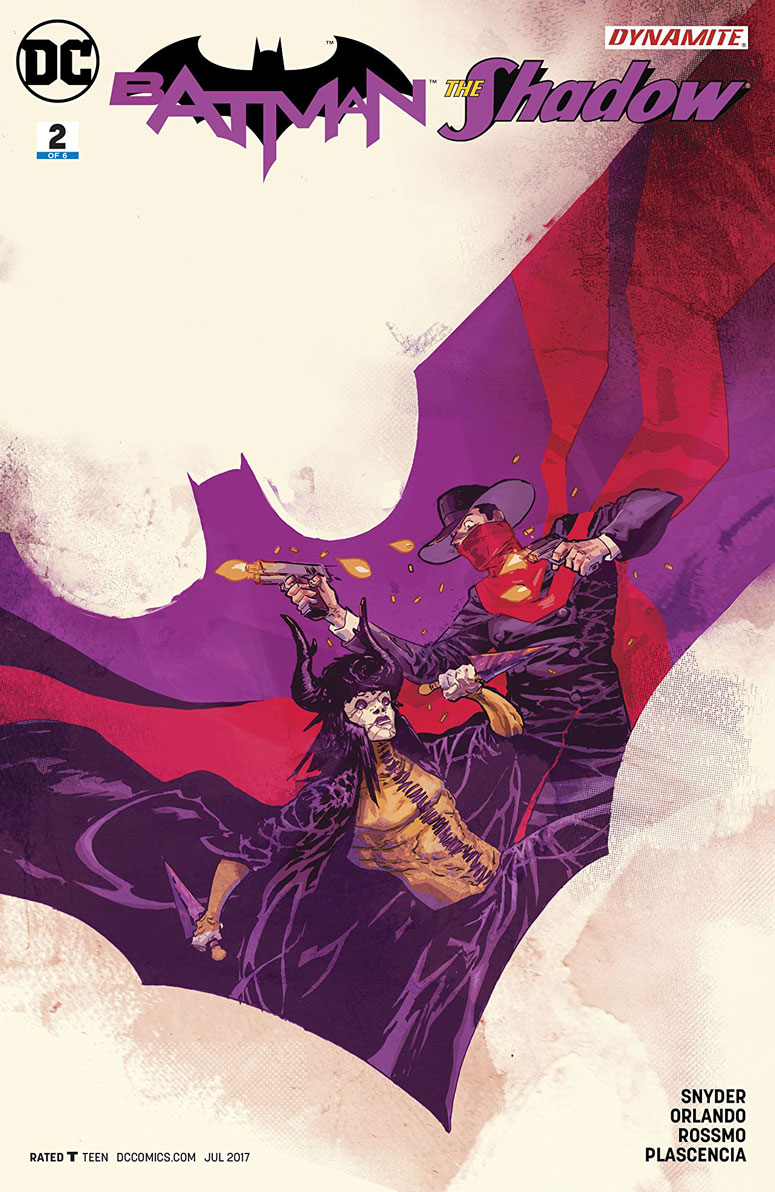 “You came to Ducard hunting the Shadow. Instead, you’ve found him, living inside your mentor…I’ve always been here, Batman. Behind you.” Two worlds collide as the Shadow entrenches himself deeper into the realm of Batman, seeping into Bruce’s past and present in this latest issue of Batman/The Shadow.

Snyder and Orlando are brilliant. I love their writing for the Shadow. The Shadow is a force of nature, an unhinged creature of insanity that bridges the world of the living with the plane of immortal ideas, a being who’s chosen a life of unbiased truth while sacrificing what little humanity is left inside him.

Bruce, a man of science and logic, will never comprehend his entire existence and for that, the Shadow and his world are a great foil to Batman and the laws that he uses to make sense of his own reality. I don’t even care about the abrupt retcon that they add tying Bruce and the Shadow together. The rapport between the two makes up for it ten times over.

I also love how blunt and to the point Margo is. For all the Shadow’s supposed altruism and truth, only Margo can see right through him, to the callousness that haunts his being. You can see it in his eyes as she points out how the fight would never end, even if the Stag died. There is always another villain, and she knows how he plays his games, toying with people to recruit them onto his side so he can play them as pawns in a grand chess match against true evil only he can see. He’s startled by her cutting words and that’s what makes Margo powerful. That’s what makes her a fantastic character.

I love most of what Rossmo creates in his art. Sure, I have a few questions. Like, should we just assume that Bruce is always walking around in a skintight suit under his civilian clothes and a cowl in his pocket? Was Bruce just wearing a sleeveless turtleneck batsuit when he was fighting the Shadow or can he just pull his sleeves off like a stripper? Or, is a sleeveless turtleneck batsuit just his casualwear in the Batcave?

However, these questions definitely do not outweigh all the fantastic art Rossmo brings to the table. He has provided an intricate tale of noir through his fluid fight scenes, his flashbacks to the past, and the Shadow’s deliberate visits to old mansions and discrete clinics in darkened alleyways.

Everything about the Shadow is simply perfect. The way he moves in dramatic disregard to those around him, as if he were a god compared to them all. The grandiose way his almost mystical red scarf flies around rooms as if it has its own mind.

I especially love the bizarre doll-like features of the Stag. He’s inhuman with these dead white eyes, this strange animal skin attire, and this series of clumsy stitches sewing up his yellow shirt as if it were keeping the Stag in one piece, as if clumps of sand or bushels of hay would fall out if they were displaced. It’s unnerving and spectacular.