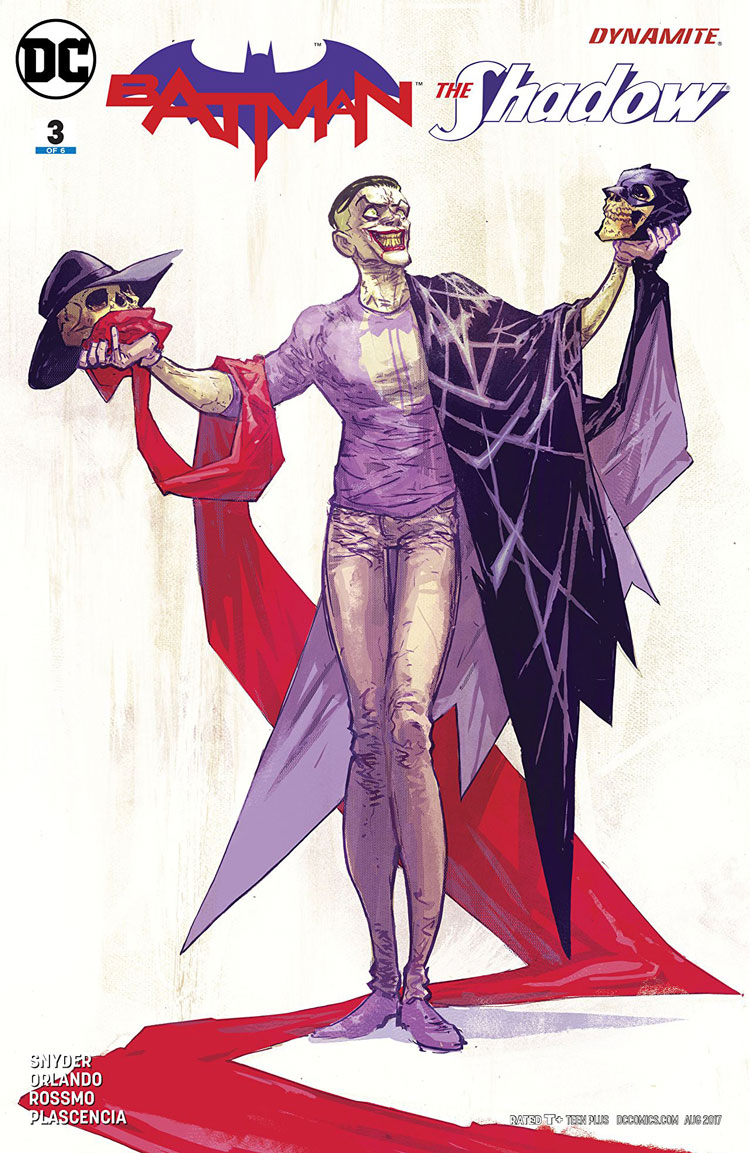 “I’ve been saying this all along. Evil doesn’t exist. There are only actions.”

Forces beyond human comprehension entangle themselves more into the chaotic darkside of Gotham as the Shadow reveals Batman’s true role in his epic battle with the Stag and the Stag reaches out to a dubious ally in this latest installment of Batman/The Shadow!

Orlando and Snyder are genius wordsmiths. Each page is more entertaining than the next. The Shadow retcon from the previous issue, while still kind of ridiculous, works really well in this comic because the Shadow in of itself is a creation above logic and thus does not need to really adhere to it.

Everything the Shadow says is sheer gold in general. Nothing that character says is ever dull or not meticulously culled. Mostly because he’s a man, or I suppose a being, that is always in control. However, that illusion is hard to create if the writer doesn’t put effort into it, so I appreciate the hard work there.

I also think the writing for the Joker is perfect. He’s the most interesting character in the entire comic, only barely above the Shadow, mostly because of his dialogue. The way he speaks about Batman — in this twisted obsessiveness, almost straddling the line between dark fanaticism and unhealthy infatuation, is fascinating to read. And while his lines about Batman are enthralling, I find his his bizarre, interview-like discussion with the Stag to be intriguing, especially when he explains his opinions on evil.

The art done by Rossmo is captivating. His character design is just hard to look away from. Alfred, for one, seems so unhinged. Constantly, there’s an on-edge look in his eyes, a tension in his body. It’s this understanding of what can be seen in the depths of the eyes of the Shadow, this great knowing of the darkness that lies in the hidden corners of the world and the need to protect Bruce from such a path and it is amazing.

I also love the unbridled insanity that paints the face of the Joker. With a surprising air of clear comprehension of his actions, the Joker is compelling. Yet, there’s instability in his smile, a mania coloring him that can barely be contained by his definite understanding of what he does. I also love the fact that he somehow found himself a purple tuxedo shirt. It looks fabulous on him.

The colors Plascencia brings complements the art well. There’s a strange theme of darkness surrounding those deemed “good” while white brightness surrounding those deemed “evil” that turns the tables on the stereotypical thematic use of the colors, which is refreshing. The usage of the colors is more pronounced in this issue, creating a stark contrast between scenes such as Alfred’s conversation with the Shadow in a poorly lit room compared to the great use of negative space for mannequins around Batman in one panel as he’s fighting the Stag.

Batman/The Shadow is a spiraling waltz downwards into the darkness inside the heart of men and the insanity that drives one towards it. It is a great exploration of who should be deemed evil and what happens when two forces of nature shake the already unstable fabric of a city hanging by a thread. You should read this comic.