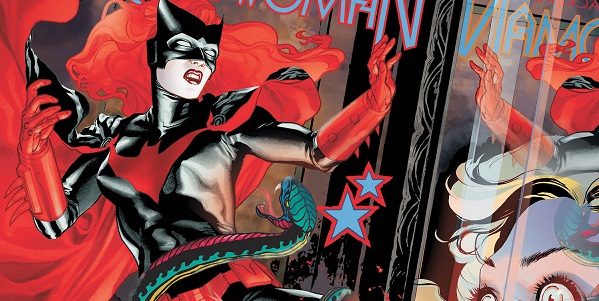 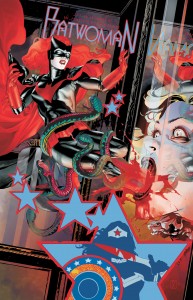 J.H. Williams returns to art as Batwoman sets off on a collision course with the Amazon Princess herself, Wonder Woman. Children remain missing as clues to the secret behind the Medusa Cult begin to surface. But this new adversary is no average Arkham inmate, and it will take the combined training and knowledge of these two preeminent warriors to take Medusa down.

I imagine this title has been lingering on the edge of some readers’ drop list these past few months, as it has mine. Between artist changes and a narrative style seemingly inspired by Quentin Tarantino (but not, unfortunately, executed as soundly), Batwoman had become somewhat difficult to digest and enjoy. That said, with issue twelve, the book redeems itself — with a vengeance.

Williams’ pencils are as elegant as ever, splitting the screen in some instances between Kate’s hunt for a killer and Diana’s battle with mythological beasts. The two narratives banter back and forth fluidly — with a brief interlude to check in with the recovering Bette Kane — as momentum builds effectively to the final page. This is a much more successful experiment in narrative structure than that of the last storyline, so I almost feel like it was worth the previous issues’ confusion to work out kinks and get to something so finessed. There do seem to be more pages with standard comic page layouts intermixed with the types of wild styling that we’ve come to expect from Williams. If this implies the artist is pacing himself to maintain a monthly schedule for a longer period of time, then I can hardly complain.

This issue is just the beginning of a larger story, but it functions well as a starting point. True, the impetus for Kate’s mission to meet Diana is based completely on the events of the prior eleven issues, but enough information is shared in monologue to get the reader going. The true treat here, however, is seeing Kate Kane finally begin to interact with the larger DC Universe. I didn’t know how much I wanted to see a Batwoman/Wonder Woman team-up until I grabbed this issue.  Now I can’t imagine why I haven’t been screaming for it nonstop since last September. Diana is every bit as compelling and ferocious as she is in her own title, but knowing that the two heroes are on their way to being fast friends? That’s been well worth waiting for.