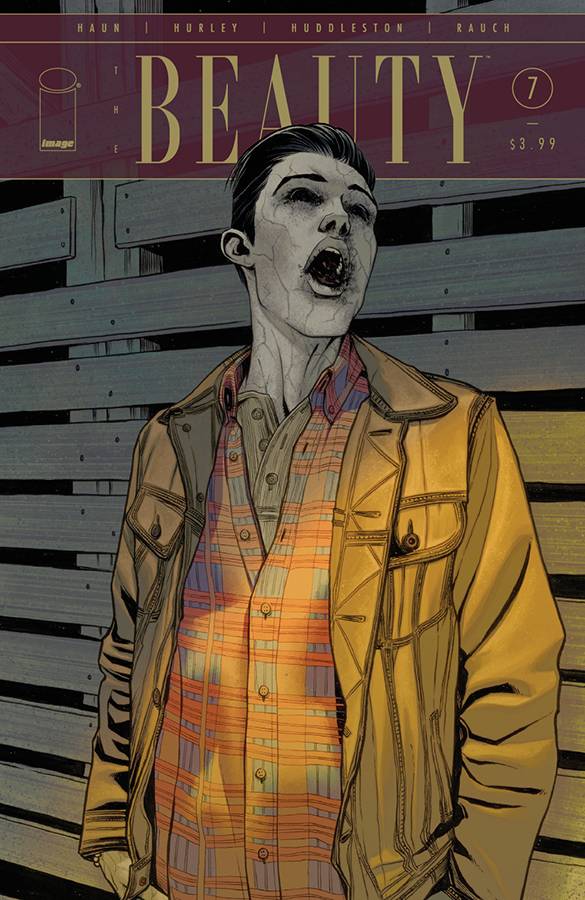 If you’re trying to go on the run, why not contract a disease that makes you inordinately beautiful?

Timo is set to raze his gang and start from scratch, snuffing out his crew. After this force of nature takes care of business, he sets his plan in motion to start anew, even if it requires an extreme amount of discomfort.

Beauty #7 takes a stark turn in time and perspective for the series. Instead of a continuation of the previous arc, we have a new protagonist with a completely different story and one of the major plot elements of the series, the Beauty, has not taken such a hold. I’m interested to see from this point if it will take the forefront as a story element, or if the story from this point will continue to use it as a less emphasized component. It feels like all bets are off from here, and I like that. Coming off the first arc, this issue is an indication that the series is moving in a better direction.

Jeremy Haun and Jason A. Furley use the Beauty in a way I didn’t expect. Gangsters leaving their gangs on bloody terms is definitely nothing new, yet Haun and Furley implemented their primary plot device to put a new spin on this type of story. Of course someone always comes after the rogue criminal, but within this story the disease is going to make that much more tricky. Beauty #7 utilizes story and world building around a common theme that makes the premise much more interesting for me.

Mike Huddleston sure does know how to draw violence and carnage, complete with Mortal Kombat-style x-ray captures. Gore within this issue is the refuge of significant detail, and less attention is paid to the bodies and facial expressions. This effect allows for John Rauch to take Huddleston’s work and dip it in an atmospheric grunge. Much of the issue feels dirty and grimy thanks to a restricted range of colors and deliberate use of shadow and black for emphasis.

My initial surprise eventually lead to a pretty enjoyable experience. I like anthology style series that explore the same world, so I hope that’s what Beauty is turning into. Because of this issue, I’m more on board than I expected I would be. I’d like to see where the series goes and how Haun and Hurley craft the story, as well as how they work with the shifting crew of art teams in subsequent issues.