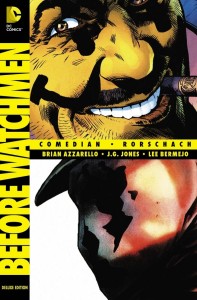 “Everyday the future looks a little bit darker. But the past, even the grimy parts of it, well, it just keeps on getting brighter all the time.”

There’s nothing a little distance can’t help when it comes to fan outrage. In today’s culture — particularly online — we’re prone to immediate bouts of anxiety, anger, and occasionally glee, as if to process our emotions through a round of rationality were to somehow unreasonably censor ourselves. To wait out the results of a full (or frankly any portion of a) story before rendering intellectual judgment is not unheard of, but frequently drowned out or pushed down the page results by a mayhem of self-propelled controversy.

And so, we’ve reached the conclusion, and collection, of the Before Watchmen project. 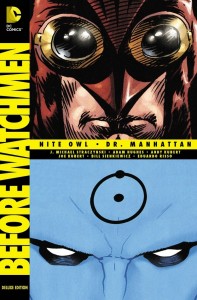 Rereading the stories included in the second set of hardcover releases — those helmed by authors Brian Azzarello and J. Michael Straczynski — I can’t help but get a completely different feel from them. It’s almost a third stage of interpretation, the first two occurring within the weekly rotating release schedule and, of course, the pre-release speculation. Here, readers have an opportunity to see how each title holds together as a full story, and moreso, a collection, with results being very surprising from my perspective. As it turns out, I am now most impressed with the series which impressed upon me the least in their monthly arrivals.

Straczynski’s Nite Owl stands out as a nearly perfect straightforward super-hero story, telling the story of a coming of age and responsibility for second-generation crimebuster Dan Drieberg. Far from the impotent protagonist of Alan Moore’s original tale, Nite Owl is a confident, but smart, vigilante surrounded by people certainly more questionable in their moral standings, but recognizing their value as partners just the same. The Twilight Lady, like Rorscharch, isn’t either a perfect heroine or villainess, but possesses an adventurous spirit and sense of justice that makes her a breakout character who never had a chance past random mention in the 1986 mini-series. Her camaraderie with Nite Owl, on the streets and between the sheets, is part of what makes this story one, upon a full read, one of the strongest of the Before Watchmen tales. And the art team of Andy Kubert and his late father Joe certainly don’t hurt either, as a more perfect combination for illustrating a pulpish, but modern super-hero tale couldn’t be imagined.

By contrast, though, Straczynski’s Dr. Manhattan tale — and to some degree his story of Moloch the Mystic — suffer too much from trying to one-up the original source material. Dr. Manhattan feels like an attempt to deconstruct the hero who already was deconstructed by Moore himself, and the result is a retreading that at first seems fascinating, but quickly devolves into tedium. The concept of alternate timelines and Schrodinger’s Cat in action are certainly fascinating to explore, but Straczynski places too much emphasis on these ideas in the plot and breakdowns without ever coming up with a substantial enough story to support it. By the end, Manhattan is less intriguing a character than he was at the start, and that’s only really occurring in one other series among the group. No question, however, that Hughes’ art (as well as Risso’s for Moloch) is exceptional, and the opportunity to see one of our modern masters on something more substantial than cover art forgives many, many story sins. From the pencils to the color palette choices, Dr. Manhattan remains a story well worth pouring over, even if you don’t wish to read it too carefully.

But, for as divergent an experience the Straczynski volume seemed, the Before Watchmen compilation of Brian Azzarello’s two anti-heroes — the Comedian and Rorschach — stands out as a exceptional creator vision of two very curious, if not enigmatic, figures. Rorschach, like Nite Owl, is a fairly straightforward tale that does not attempt to engage the original Watchmen series in any substantial way outside of the starring characters, and the experience feels more pure for the effort to stay away. Azzarello and Bermejo combine forces to deliver a gritty, almost stomach-turning experience of late-seventies New York City and a protagonist that fits right into his surroundings. It’s a disgustingly beautiful affair, and while I think I enjoyed the experience more in serial fashion (so as not to be overwhelmed by the four installments at once), there’s something unique about experiencing such a visceral expression of the hero that’s so radically different than what Dave Gibbons put on the page in the mid-eighties.

Ultimately, however, the bright star of this volume is Eddie Blake himself, a terrible, terrible person that you just can’t help but marvel at for his complexity of character and surprising vulnerability. For a man who only showed flashes of kindness in his previous renderings, we get to see the full gamut of extremes from the Comedian in these six chapters, arching over the 1960s like a Time-Life documentary. In that sense, Comedian takes a smart road in not trying to fit into the original Watchmen continuity so much as fitting into the world that book also located itself within. It’s a very fine distinction, but an important one for Azzarello’s success, nonetheless. This story exhibits the richest characterization and strongest sense of place of any of the stories in these volumes, and compels the reader to empathize with a man who truly deserves to burn for his actions. This is an accomplishment often attempted but rarely achieved in modern comics, and Azzarello and creative colleague J. G. Jones deserve an enormous amount of praise for the story’s bittersweet qualities in the face of utter nihilism.

There will always be those who feel that the Before Watchmen experiment was a mistake on DC Comics’ part, that the original volume was so sacrosanct as to be an anomaly within a genre predicated on the serial nature of a never-ending story. The endeavor of assessing these stories on their own merit, however, is worth taking, particularly for those stories that embraced that rationale at their core. The less these stories are thought of as Before Watchmen or “More Watchmen,” and simply as newer tales of Comedian, Nite Owl, or Rorschach, the more likely it is to be an enjoyable experience for readers who fell in love with these archetypes so many years ago.