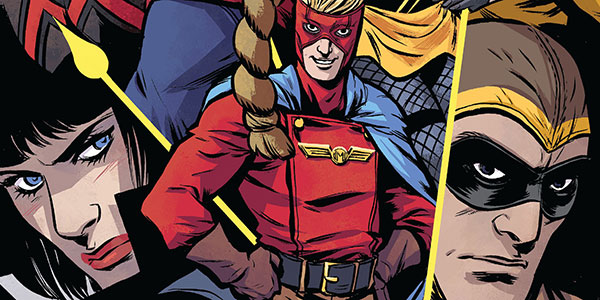 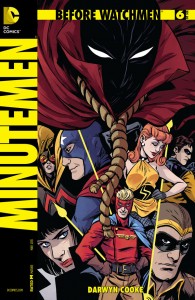 The premier book of the Before Watchmen line ends its run with a conclusion to the tale of the last days of activity for Hollis Mason and his masked colleagues. The Minutemen are no more, but one last critical mission in honor of the brave departed Silhouette leaves Nite Owl with enough surprises to fill two books. And just who has the last laugh after all? Well, they don’t call him the Comedian for nothing…

For most of the last year, comic fans have drawn lines in the sand over DC’s decision to expand upon the universe created by Alan Moore and Dave Gibbons’ classic 1986 mini-series Watchmen. Every expletive has been thrown, every justification (on both sides) has been made, and now, as was inevitable from the start… it’s over. Not every book was a mad critical success, although I managed to find gems even in my least favorite of the titles. Minutemen, however, is the one that I suspect will stand the test of time — for a whole series of reasons.

For one, it slides into the original continuity of Watchmen so seamlessly, without disrupting any reveals or surprises that still, to this day, make that book one that new readers can pick up and thoroughly enjoy. Were Minutemen to be read, as the title suggests, before its literary grandfather, it would only enhance, not detract from, the reading. The expanded look at Hollis Mason that Darwyn Cooke writes in the series takes a somewhat ancillary figure and renders him in full three-dimensional heroism, virtues and flaws intact. His friendships with both Mothman and the deeply compelling Silhouette stand up to some of my favorite hero partnerships of all time. No longer slight caricatures of forgotten Golden Age heroes, these two have been granted a nobility and grace through Cooke’s elegant weave of a story that Moore never quite had time or inclination to manage.

Cooke’s finished art on the series has done Gibbons proud as well. Sustaining the original nine-panel grid for the bulk of the pages, Cooke takes great care with detail upon detail, but never loses the sort of airiness that his looser style endows his figures. Every lunge and fall feels natural across panels, and the tension behind the reveals of this last, great issue is absolutely palpable in his visual pacing. Yes, Cooke’s style is a much cleaner, more retro feel than the harsh realism of the original tale, but it’s the juxtaposition of presumed innocence with a darker reality that makes the simple lines and two dimensional shading all the more haunting.

The critical “lost” addition to the universe that Minutemen provides in this final issue shocked the hell out of me, which is a brave achievement considering we already assumed resolution on these characters over twenty-five years ago. That it saddened me to the extent that reliving Silhouette’s death did surprises me, but am I disappointed in the reveal? Quite the opposite, for Cooke has given me yet another genuine moment of emotional resonance that actually lives up to what I felt the first time I read Watchmen. No small feat. For this reason alone, I can unapologetically applaud DC Comics for this series. Haters line up to the left, but I’ll be placing Cooke’s Minutemen right next to Moore’s classic on my shelf as soon as I can. This is one for the ages.