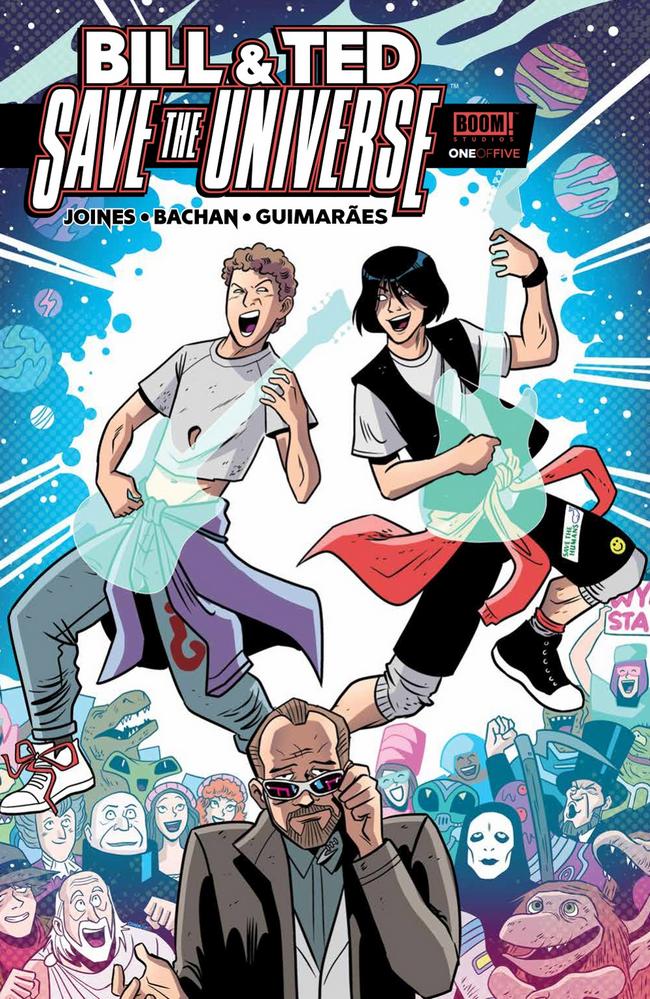 Bill and Ted have a most excellent destiny—they’re going to bring peace to the entire universe! But is their destiny truly as resplendent as they thought it would be? Or is it turning out to be totally bogus? Find out, dude, in this “most bountiful in dramatic overtones” issue of Bill & Ted Save the Universe!

I have always been a fan of Bill & Ted and I find Joines’ continuation of these fun loving, peace bringing, history surfing rock stars to be on point. I love how Joines interweaves the mythos of the films into the comic while adding some legitimate adult themes I did not expect. There’s this theme of familial relationships and Bill and Ted surprisingly wanting to be better to the family they’ve made than the family they were born into treated them and that is not something I thought I’d see in a Bill & Ted comic. However, it is also why I’m really into this first issue. They are legitimate adults and I like that they’re need to be good fathers and husbands is at the crux of the plot and may actually drive them away from the fate that the future has pushed onto them. I find that compelling and I really want to know how it all turns out.

The art style Bachan brings fits the tone completely. It feels very nineties with a touch of polish. There’s a goofiness to it all that goes perfectly with the atmosphere of the films, yet, he also understands when to bring touches of seriousness onto the page, especially when the surprisingly nuanced plot kicks in. Something I find interesting is how Bachan draws Rufus. Yeah, he looks like Rufus from the films, but after rereading the issue knowing the big reveal, most of the times you see him, he does look more skeevy than usual, as if his almost ominous demeanor is foreboding of the part he plays in the plot.

Guimarães’ coloring brings brightness to the pages. Each panel is vibrant and obnoxious in a good way, pairing well with the tone of the comic while giving some of the more serious scenes some lightness.

I think my favorite scene they create in this comic is the “Happy Anniversary” splash pages. It’s this great homage to all the Bill & Ted films, illustrating most, if not all, of the people they’ve met throughout their adventures and journeys and it’s all very heartwarming. I like being able to look through the crowd and spot the random historical figures they’ve met or an excited Death. It’s really cool.

Oh my gosh, I don’t even know why you’re reading my review, just go ahead and read this comic now. If you love the films, you’ll definitely love this, and if you thought the films were too goofy, you may be pleasantly surprised with what this team does with the series. Seriously, this issue is most excellent.