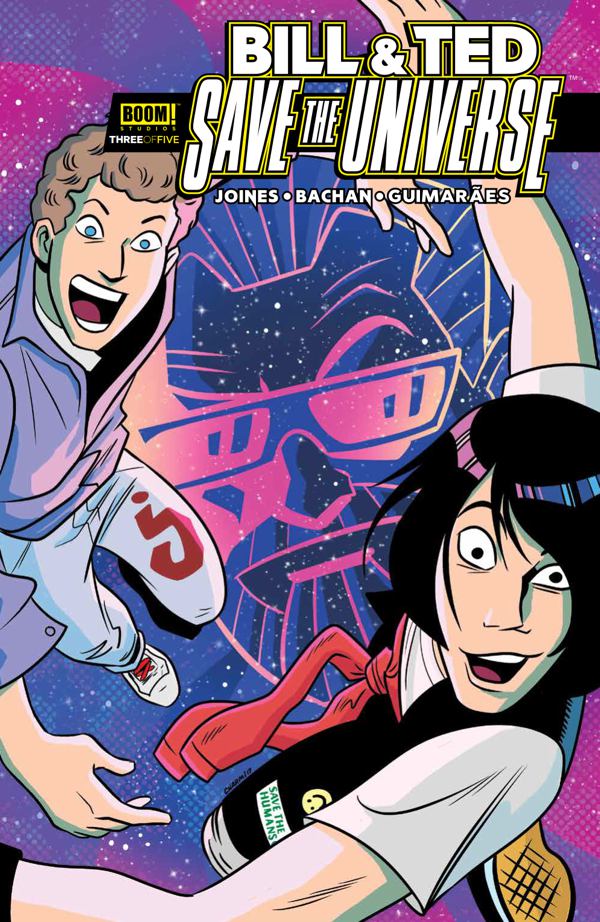 Deep into the trials the galactic council has placed them in, will Bill and Ted survive their most epic battle with the dreaded Chrondolyke? Find out in this latest issue of Bill and Ted Save the Universe!

Joines weaves a great tale between macro and micro themes of greater good and relationships. I love how the core of this entire story is about family dynamics. I love how he’s created this arc about what’s more important – the universe at large, everyone out there who may need you, or your own universe, the people you care about. It’s surprisingly heartfelt in a way, trying to balance what’s the right thing to do for the world and what’s the right thing to do for your family. I love how Bill and Ted do truly want to be better parents than their mothers and fathers. I love how important not just their fathers’ roles are, but their mothers’ roles are as well. I love how active the roles of their wives are and how important their children are to Bill and Ted.

I especially love Deacon in this particular issue because it really shows how Deacon seriously has the short end of the stick. His mother halfheartedly apologizes to him for leaving him in order to make Ted more popular, his father constantly is trying to wrangle Ted into a box that Ted never belonged in in the first place, and his girlfriend, like all the other nonfamily member people in his life, gets close to him just so that she could meet his brother. Deacon has lived as the least important person in his family and second fiddle to his brother for a long while now and is understandably not okay with it. Since the true themes of this comic are those of familial ties, I hope Ted is able to help Deacon before Deacon truly gets mixed up in some unsavory business due to the neglect he has felt.

The art by Bachan is wonderful. The variety of aliens seen throughout the issue is fun. I especially like the design for Aesthelip, it kind of reminds me of the interdimensional beasts from the Pokemon: Moon game. That or a gigantic floating wig. It’s really fun looking.

I also love the black hole surfing scene. It’s all very psychedelic looking. Bill and Ted’s body’s stretched out. A crowd cheering in the background. Not only Bachan’s art, but Guimarães’ coloring of the interstellar body swirling around in a sea of tie dye twists and black speckles and blindingly vibrant white smears. It’s a wondrous sight to see.

Read Bill and Ted Save the Universe. Oh my gosh, please read it. It’s SO GOOD! It’s everything the movies are and more and if you like a couple of decently intelligent, surfer-talking band dudes traversing the stars while grappling with being good sons, fathers, and husbands, then this is definitely for you.