The time to be “most excellent to each other” has arrived with the dawn of Bill & Ted’s empire of peace. Sure, it’s not here yet but with their single hit taking the world by storm, genius cannot be stopped; as soon as they figure out a second hit… and a third… and a fourth.

The two California, Van Halen loving, air guitar playing dudes are trying to figure out just how their bid for world peace and domination plays out. They know it happens. They’ve been the future. They’ve seen it. They just have no clue what other songs they’re supposed to write to get there. Their buddy Rufus, who is from the future, and provided them with their telephone booth time travel machine in the past, is not letting them take shortcuts. So what else are they supposed to do, but have their genius buddies, Station, build one for them.

Most Triumphant takes place five minutes after the ending of the Bogus Journey movie story line. No live television shows or cartoons to worry about. Now, with Bill & Ted being family men, the language and outlook of the story is much more all-age friendly, compared to the movies.

However, the comic relies heavily on the jokes, phrases and stories laid out in the second movie. From Death himself (yes the guy with the scythe that takes you when you die) being their go-to guy for random odds and ends, to the alien twins who join as one and only say “Station,” and the robot versions of Bill & Ted that Station built; knowledge of Bill & Ted’s travels through heaven and hell are almost a necessity for understanding this first issue.

This book puts on no airs about what it is all about. It caters specifically to the fans of the movies, or those who at least watched them once or twice growing up. Anyone who picks up this book without any background knowledge might think it’s cute, but lose just how much of the voice and feelings of the original characters Lynch laid into the dialogue.

Jerry Gaylord’s love of pop culture characters is clear in his artwork. Each of the characters are distinct, and with Penelope Gaylord’s inks, they support characters look just like you remember them from the movies. The facial expressions are over the top, camp which fits in perfectly with the characters. Crowd shots are more detailed, with each person looking different and more diverse than perhaps they were in the movies.

That’s a benefit to having the comic created 24 years after the last movie. They can work and play up what is fun while ignoring, rewriting or not using elements that were problematic in the original series. Whitney Cougar’s colors are vivid and fun. There is a careful decision to make any travels to the future take on lighter and more neon tones. This helps the twist at the end of this first issue stand out from the crowd. Without the clear artwork, it would fall flat.

The Ryan North back up story includes the same fun perks that he brings to his other stories, such as Squirrel Girl. There is hidden commentary along the sides of the page, nods to the original story as well as a trip to 2015 to visit a computer repair woman who is named Erica. Why, yes, Ian McGinty has provided her with a very similar hairstyle to North’s artistic partner on aforementioned Marvel property. The gag of the back-up story is worth it alone, however these hidden gems make it that much more enjoyable. 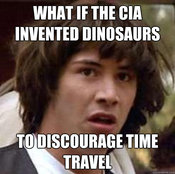 The younger me, who watched Bill & Ted movies over and over again, while memorizing most of the lines, wants to say this comic is resplendent. The stellar and triumphant return of Bill & Ted is heinously long overdue. Their exposition of speech, copious use of the word “dude” and general references to each of their time travel/heaven & hell derived “family” create a bodacious feeling of familiarity.

However, it’s no more than a nostalgic romp. That could quickly fall flat if the story does not deliver in future issues. Also, whole generations of adults are wandering around having never seen the commercials for Bill & Ted, let alone the movies. Their biggest exposure is from a meme generator, instead of the first film, Excellent Adventure (where the screen cap of this meme originates from.) How bogus is that? It has the potential to get those who do not know much about the Bill & Ted universe to try it out. However, it makes no qualms about the fact that, without the movies, the learning curve could be steep.

The all-age appeal, fun artwork and crazy story line might be enough to get those who are not familiar with the franchise to go back and experience it on video on demand or buying actual discs at a store.