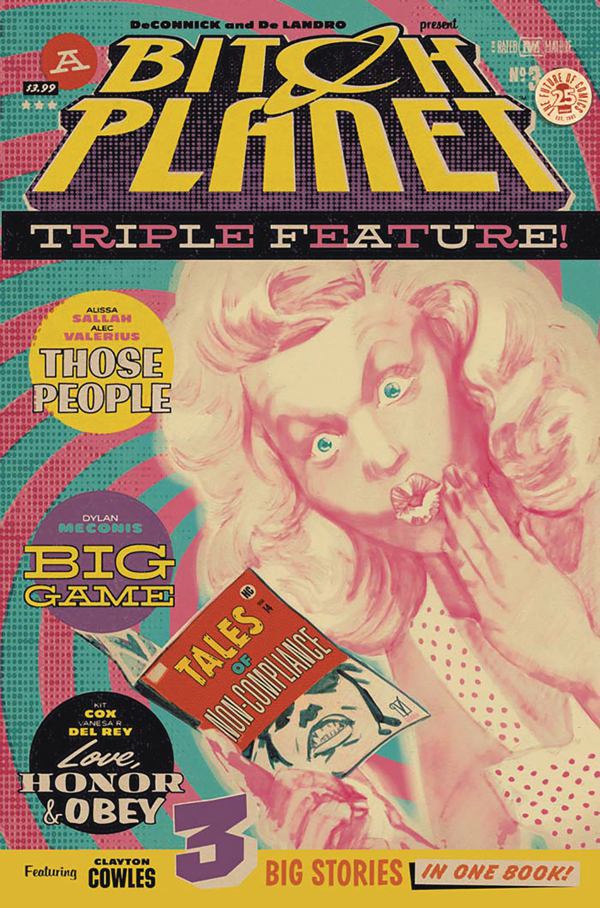 However, this shift towards the men of the Protectorate is not done carelessly. In true Bitch Planet fashion, through moving the narrative lens to a masculine-centric perspective, the authors of each-one shot further reveals the ways in which gender and masculinity are inextricably linked to power and domination, both in the world of Bitch Planet and in our own.

Those People, written by Alissa Sallah and illustrated by Alec Valerius, is the first story in Triple Feature #3. We follow a young member of an armed squadron on a SWAT-style mission. There is an air of anxiety as the captain of the squadron explains the danger that the troops will be running into: “They want you dead…there’s a good chance they’re packing some serious heat…these types have almost superhuman strength.” This language—which echoes language used to justify state violence in the real world—takes on a completely new meaning when the real “threat” of the narrative is revealed. Valerius’ art style, especially the use of bright, vivid colors, really hammers home both the air of unfounded panic fostered among members of this armed squadron, and the youth and inexperience of this one-shot’s protagonist.

Big Game, written and illustrated by Dylan Meconis, follows a ranger and his young deputy. They are trekking through the wilderness to capture a “predator” to return it so it may, “…adjust to its place in the…ecosystem.” The use of Mother Nature/Father Civilization metaphors are a constant thread in this one-shot, emphasized by the lush details and brilliant use of colors that Meconis uses in the art. Much like in Those People, the deputy is a young man, a first-timer, being led by an older man. In Big Game, however, the experience is one-on-one, making it far more familial. In any other narrative, this would have been a heartwarming tale of a young deputy learning the ropes from a friendly, experienced wilderness expert. But in true Bitch Planet fashion, Meconis takes comfortable, familiar tropes and flips them, deftly using them to expose the dystopian horrors of the Protectorate.

This issue’s last story, Love, Honor, and Obey, written by Kit Cox and illustrated by Vanesa Del Rey, takes a completely different narrative route than the previous two. In this one-shot, we follow a detective as he questions Betty, a “doll in a bad spot” whose partner died during sex. Love, Honor, and Obey is short and punchy, with a twist at the end that completely reframes the story, and subtly adds a layer of complexity to the dystopia that is the Bitch Planet universe. Much like in her issues of Scarlet Witch, Del Rey’s art perfectly captures the smoky, mysterious tone of this narrative, the sketchy lines, dark shadows, and textured monochrome shading perfectly complimenting Cox’s writing.

Triple Feature #3, in focusing on the institution of masculinity, not only expands readers’ knowledge of the Bitch Planet universe, but it also offers a sharp critique of institutions of power in the real world. It also raises questions. In Margaret Atwood’s The Handmaid’s Tale, we see a gay man hanged as a “gender traitor.” What happens to queer men in the Bitch Planet universe? We see that trans women were sent to the titular Bitch Planet—what happens to trans men, or nonbinary folks? And how does the intersection of gender and race impact men of color in Bitch Planet, outside of the racialized microaggressions that we saw in the first arc? Through focusing—for the most part—on white men active in upholding the literal patriarchy that is the protectorate, Bitch Planet: Triple Feature #3 raises these questions; questions that speak to the relevancy and depth of these one-shots.

Given the events of this week, Bitch Planet: Triple Feature #3 can be a heavy read. Themes of state violence, the creation of a marginalized and demonized Other, and gendered institutions of power are hyper-visible in this issue, arguably moreso than in most issues of Bitch Planet. But that hypervisibility is exactly what makes this issue great. This issue is a prime example of good satire, and, I would argue, extremely necessary in these times.