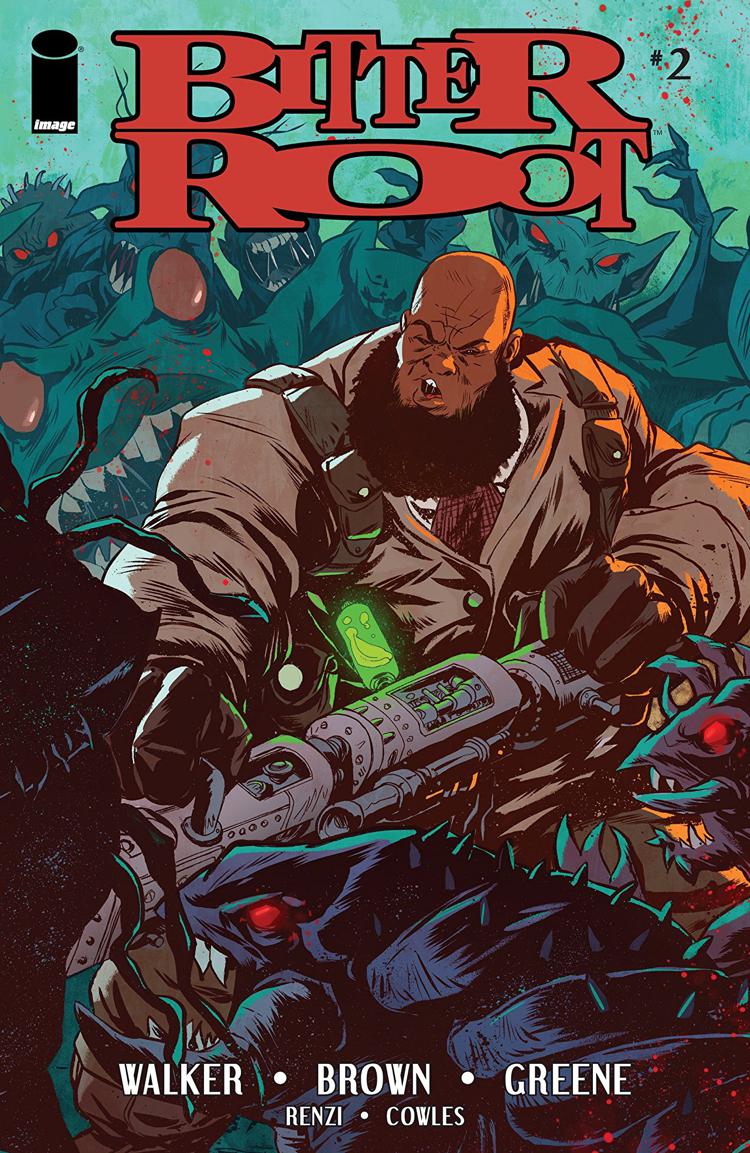 With the beginning of a new series, there is always quite a bit of heavy lifting for the first few issues to do. Bitter Root#2 continues the heaving lifting and the task of fleshing out the world of the Purifiers and the Jinoo that creators David F. Walker, Chuck Brown, and Sanford Greene are establishing.

The issue picks up right where issue #1 left off, with the Sangerye boys in a very precarious position facing down a Jinoo unlike any that they’ve ever seen before and with a masked figure in Mississippi battling a whole horde of supernatural Klansmen. Over the course of the book’s second issue, we come to learn that the mysterious Jinoo slaying stranger is, in fact, a member of the Sangerye family who shares in his family’s mission of protecting the world from the Jinoo and the chaos that they bring. His approach, however is a lot more deadly and a lot more final. We also begin to notice a budding partnership between him and one of the Klansmen that survived his slaying, not out of any sense of sympathy or care, but more so due to what the Klansman could offer him in terms of destroying more Jinoo.

Over the course of the book, we also get to see Berg and Cullen attempting to make their way back to Ma Etta and Blink as the “Jinoo” that the duo encountered seems to have injured Berg. I won’t spoil anything or say too much, but I will say that I put Jinoo in quotations in this instance for a reason and it’s because we come to find out that the crow-like creature isn’t like any Jinoo they’ve ever seen because it’s not what they think it is. The issue treats us to a delightful surprise as writers Walker and Brown give us an interesting little twist while also providing us with yet another mystery.

As always, Sanford Greene’s art is fantastic and it adds a very urban legend/mythological feel to the book that greatly elevates the work of Walker and Brown. I have always loved the way Greene draws Black characters as he is unapologetic in his portrayal of their Blackness and doesn’t try to soften any features or characteristics to appeal to a Eurocentric art standard. Greene’s art style and use of color make this book feel as if the story of the Sangeryes and the Jinoo were a part of African American mythology and akin to the likes of John Henry. The masterful use of bright colors and multiple shades and tones beautifully establish the magical and almost dreamlike elements of the story.

I’ve said it once and I’ll say it again: David F. Walker, Chuck Brown, and Sanford Greene is a fantastic marriage of talent that delivers on every single note from story to artwork. In a visual medium like comics its always important for the artwork and the writing to mesh so as to not cause a disjointed vision and sometimes that can be a little complicated when you have three different people working to craft one cohesive vision, but this trio does it and does it well. Each of their talents complimenting the others and coming together to create a beautifully fun but that seems just as much a celebration of Blackness as it does a love letter to Black characters in science fiction and fantasy.

Overall Bitter Root#2 continues the trend of the first issue and inspires both interest and mystery. Issue #2 does a fantastic job of feeding you little bits of information and exposition that help to further flesh out and pump life into the world of the Sangerye and Jinoo. With its colorful cast of characters and settings I’m certain Bitter Rootis going to be one of the series to watch out for in 2019 as its trio of creators continues to spin out the books fascinating concept and delve deeper into the Sangerye family and the world of the Purifiers.