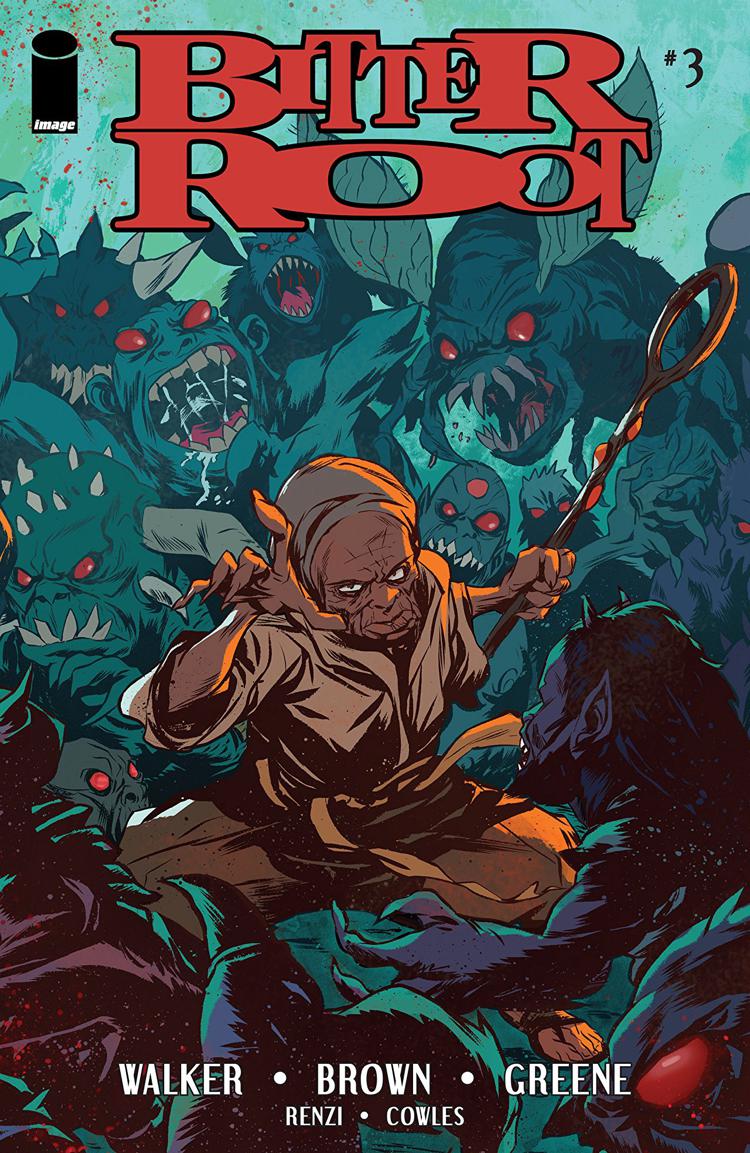 David F. Walker, Chuck Brown, and Sanford Greene’s Harlem Renassiance era tale of an African American family of demon hunters that protects the world from the Jinoo continues with issue #3 of their riveting series.

Bitter Root #3 pick up right where the last issue left off with the revelation that whatever it is the Sangerye battled in the woods has left Berg infected with the same affliction. Berg’s transformation takes center stage as Ma Etta, Blink, and Cullen attempt to not only cure Berg but also figure out just what it is he has become considering Jinoo cannot infect others. With no one in the family understanding whats going on with Berg or how to help and Ma Etta being un able to locate a potential cure or starting point, Cullen suggests that they seek help from an estranged member of the family, Uncle Enoch. Cullen suggests seeking out the help of Enoch due to his vast array of knowledge outside of the Jinoo and other otherworldly things that arent common knowledge. Its with Cullen’s suggestioin to seek Enoch’s guidance that we actually get a little backstory on the Sangerye family and the incident that took the lives of Blink’s parents. It seems that Enoch is largely to blame for the incident and its caused some really hard feelings not just between him and Blink but also between him and Ma Etta who refers to him as “a disappointment”.

While the Harlem portion of the Sangerye attempt to figure out Berg’s situation, another story is unfolding in Northern Mississippi as Ford Sangerye confronts an old racist. During the confrontation its revealed that the Old racist might infact be a type of Jinoo that was only thought to be a myth. Unbeknownst to Ford he may have just found the answer to the Harlem Clan’s problem with Berg. Ford believes he may have come across a Gatekeeper, a demon masqueraading around as a human who guards the entrance to the otherside. We learn that the crucial difference between the Jinoo and the Gatekeepers is that the Jinoo are the result of humans hearts being infected with greed and hatred and the Gatekeepers dont start out as humans and therefore they come from some place else. The most intersting difference between the Jinoo and the Gatekeepers is that Gatekeepers can seemingly transform into their demonic forms at will and utilize their powers. If you’ve been keeping up with the series then you know that this seems to also pertain to two other characters, Dr. Sylvester and Miss Nightsdale.

As all of this unfolds somewhere in San Juan Hill west of Harlem, Dr. Sylvester seems to be going through some sort of awakening or transformation due to the fear and hatred in Harlem most likely as the result of the police searches to discover what and who killed those two police officers from last issue. In true Jinoo form Dr. Sylvester’s body reacts to the the toxic aura being given off by the foul emotions and attitudes. Right before Miss Nightsdale’s eyes the Doctor seems to transform into something else believing himself to be a righteous angel of retribution sent to destory the demons. This becomes more intersting as the issue goes on and we see Dr. Sylvester not only confront a horde of Jinoo police officers but also. We see the good Doctor tear through a Jinoo as he gives a poetic monologue about fear. The issue essentially wraps up with Ford deciding that he needs to come home to New York because he knows something is happening and maybe something else is about to happen.

Walker and Brown do an absolutely fantastic job of further fleshing out the riveting Southern tale of demons and the family that fights them from the shadows. The two have done an amazing job of fleshing out their world and further developing the characters that we have so far spent two previous issues with. We are starting to learn more of the lore behind Jinoo as well as the innerworkings and relationships of the Sangerye family. Its interesting to finally see all of these moving parts start to converage and move in a singular direction. Walker and Brown have truly outdone themselves and this is probably my favorite issue thusfar. I dare not leave Series artist Sanford Greene out because without his art this book wouldn’t truly be what it is. Greene does a splendid job of keeping the book vibrant and full of life. I want it know that there are few artists who draw Black folks as well as Sanford Greene. I absolutely love the way Sanford draws these characters, at no point does he shy away from their facial features and establishing that they look different than white characters. Alot of the times comics have a habbit of drawing Black characters the exact same way as they draw white characters and doing nothing more than changing the skin color and its noticeable, however thats not a problem with Sanford’s art. Sanford Greene’s art, especially in Bitter Root, feels like a celebration of Black people and that simply elevates each and every character he puts to the page.

Overall, Bitter Root #3 is a fantastic read and continues the fun from the previous two issues. Walker, Brown, and Greene are a dream team whose crafts seem to seamlessly and flawlessly elevate each other. The three of them have crafted an amazing story that I grow more and more excited to reach with each issue.