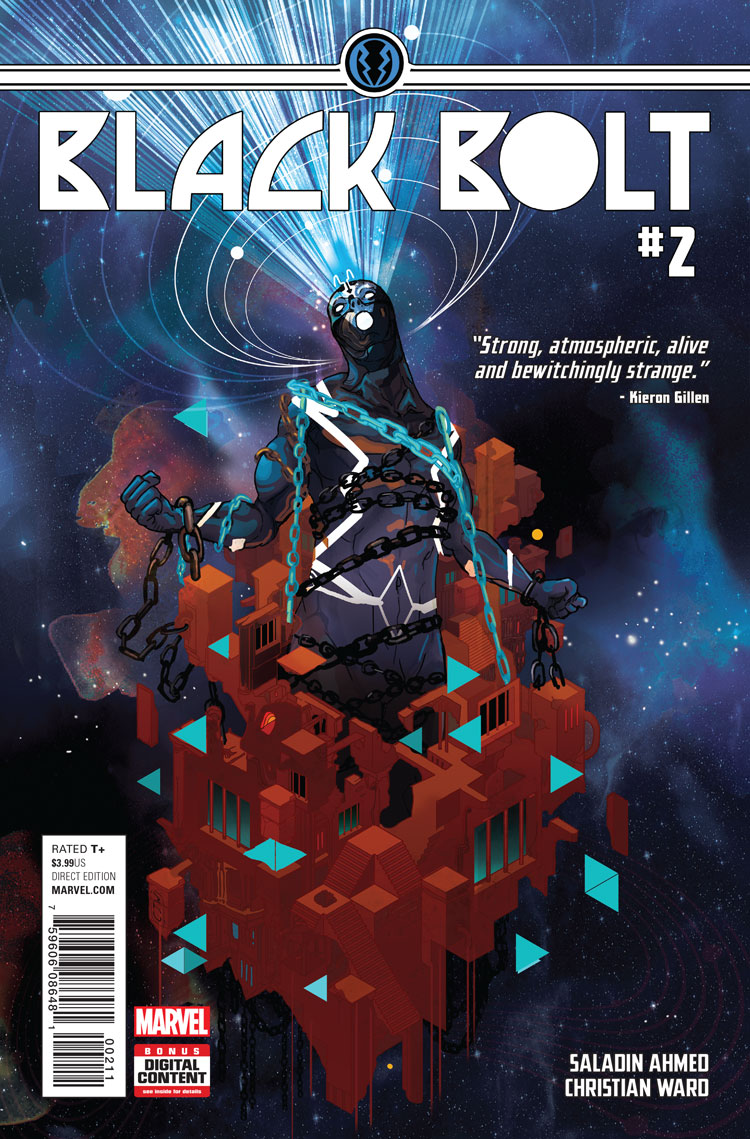 Saladin, Christian, Clayton…you’ve done something I never could have imagined I would ever experience…

All joking aside, this team has my complete focus as they weave a tale about a powerless Black Bolt, the Absorbing Man and a rag tag group of other prisoners who are stuck in a batshit crazy maximum security prison with a warden who seems to be what Nurse Ratched’s fantasies were made of. This story has gone in a direction I never anticipated when I thought “Black Bolt solo series”…and it is excellent!

Saladin Ahmed does a wonderful job with the dialogue and story pacing in this one. We’re in a prison, so there isn’t a lot of freedom of scenery to work with, so Ahmed drives a lot of conversation into this issue to move things forward. Crusher is the perfect foil for Black Bolt, as he couldn’t shut up if he wanted to. Blackagar, on the other hand, is still wary about actually using his voice, and his dialogue is simultaneously timid and regal. He wastes no words, and is everything I expected Black Bolt to be. This plot appears to be unfolding very slowly, but it is obvious Ahmed has a plan and I can’t help but see where he takes me with this series.

Christian Ward’s artwork is awe-inspiring and brilliant. To say his style is not the “traditional” superhero work we all know is a laughable understatement. His work is the kind that simply needs to be experienced, with layouts that are phenomenal and the composition of some pages is simply breathtaking. He uses colour to keep pages filled with talking heads dynamic to the point of almost distracting from the dialogue because you cannot shake the spell the art has cast upon you. This is a beautiful comic and it is obvious that Ahmed and Ward are on the same page for this story. Like so many good comics before it, Black Bolt has that feel of a creative team working in perfect unison to deliver something truly special.

Black Bolt #2 continues the exceptional work found in the debut issue and does not miss a beat. This comic is unlike anything else you will read this week and I applaud the editor who pulled this team together because this is one of those magical jam sessions that people will talk about for a long time in the future. Bring me issue #3 as fast as you can, Marvel. I want it now.