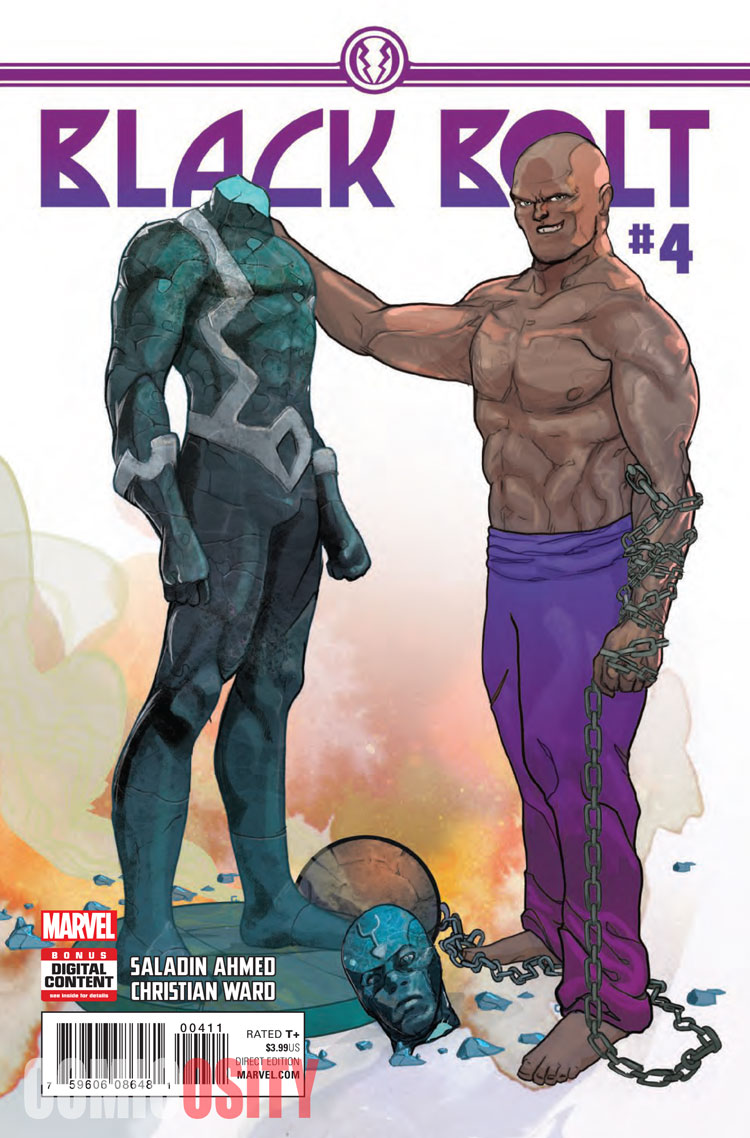 I know, I’m confused by that sentence too. Confused and confounded, and it’s all because of two masterful storytellers. When I reviewed issue #2, I raged about how Ahmed and Ward made Crusher Creel entertaining….and now, just two issues later, I actually care about the bastard.

Why? Why did they do this? Why did they produce a comic that is stuck in a single room with an Inhuman King and an absorbing-powered strong man and deliver such a compelling story? Why did they make me care about Crusher Creel?

Okay, I’ll drop the facetiousness. This is one hell of a comic right here, folks. Ahmed and Ward deliver a story that feels like Crusher Creel’s final statements and life lessons – a tale of a man who made many a wrong turn, but still found some shreds of happiness…just to have it taken away by this prison. There’s no way to read this comic and not feel a connection to Crusher, both through the words and through Ward’s deeply emotional art. The images in this comic convey so much heartbreak and joy, including a scene where Crusher is literally telling Black Bolt bad jokes that may be my favourite comics moment this year. There is so much story told here, both through Crusher’s experiences and how they mirror Black Bolt’s own extensive failures. The melancholy, the drama…this is comic book storytelling in peak form.

Ahmed has dialed directly into the core of these characters, even building them where they didn’t previously exist. Crusher has been a pretty flat villain in the past (at least as I’ve read him) and he is now a fully rounded and complex character. Even our titular King, silent in practically every comic ever, now has a voice…a brilliant voice that is filled with regret and is simultaneously strong and timid. You can read how awkward it is for him to speak and the phrasing Ahmed chooses for Black Bolt’s dialogue is absolutely brilliant. Clayton Cowles lettering drives this home, working in tandem with the written words and artwork to sell the voices of these two characters. I’ve read this issue twice before writing this and I’m more astounded by the skill of this team the closer I analyze it.

Christian Ward is a wizard. Take away all the words and he will make you feel…and he’ll make you feel hard throughout this comic. Deep pain, frustration, regret and sheer joy are all on display in this brilliant artwork. Black Bolt is one of those comics that is going to be spoken of for a long time and Ward’s work is a key component of that. He and Ahmed work brilliantly together and their work has drawn me in and refused to let go. I truly cannot throw enough compliments or superlatives out to properly describe this artwork.

Black Bolt #4 is one of those comics you can say is an example of the power of the comic book medium. This series is brilliant, these creators are on fire and I cannot wait to see what is coming next for the Silent King and even Crusher Creel.