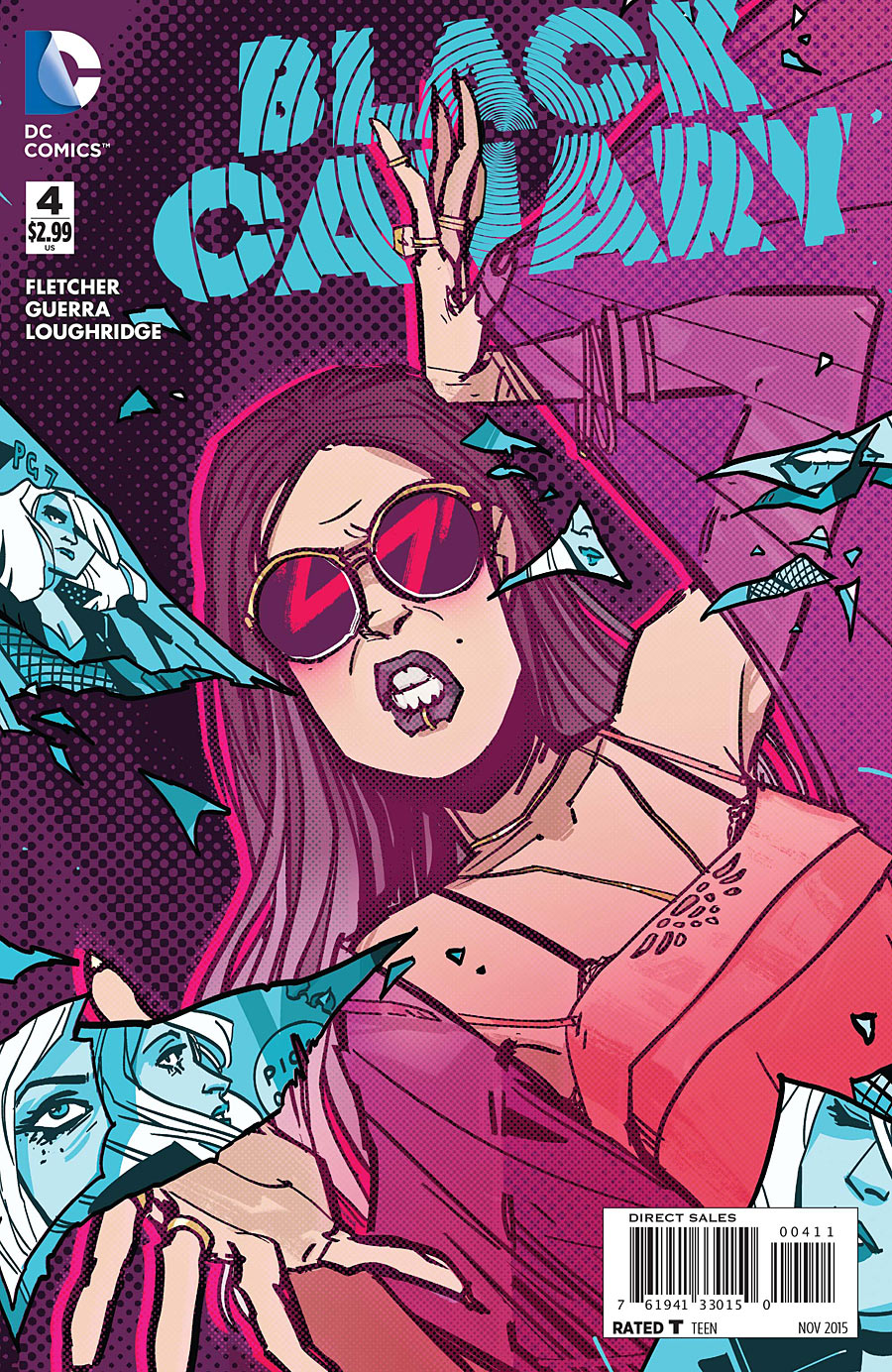 Ditto is gone and Dinah needs to find her before someone else very scary does. But who took her and why? It’s the secret origin of Bo Maeve, Black Canary’s new arch-enemy, and the search for a little girl who’s not really a little girl. Plus, who is the mysterious woman in white?

OK, first off — Dinah on a motorcycle roaring across a double page spread? AMAZEBALLS. I could probably write a whole review about that. But I won’t.

What I’ll do instead is praise the work that Guerra, Loughridge, and Fletcher construct together to make this Act II chapter of Black Canary’s first arc a fascinating and beautiful read. This issue in particular is full of moments that need acknowledgement for their elegant cleverness or just general badassery. The chopper Dinah straddles is definitely in the latter category, especially since Guerra’s Canary looks so much like a Kill Bill-era Uma Thurman, it’s scary.

And I mean that. Guerra’s Dinah is scary. Gorgeous and self-assured, but not someone I’d want to meet in a dark alley. Bo, who we get to know quite a bit better by issue’s end, may have the snark and sass, but Dinah has a sort of rawness that’s attractive here, even if unconventionally. And so, as we see the scene play out of Dinah’s acceptance into the band, it’s no wonder she was able to take Bo’s place so quickly. She’s not artifice or performance. Fletcher’s Dinah just is this magnificent woman. And that’s incredibly attractive, on stage and off.

This is not to say that Bo isn’t given some genuinely beautiful moments here, because amidst the attitude, we get to see some great spirit. The scene Guerra plays out of Ditto mimicking the wayward singer’s dance moves is really adorable, but also deceptively telling of the real Bo. This is a woman who truly believes in what she does, and so her failure is all the more crushing, as is the path she takes to follow someone else’s success rather than stick with her own. Fletcher lays out the perfect illustration of how envy and revenge can poison one’s own dreams, as Bo moves from someone who knew who she was to someone entirely different.

And it’s really the opposite path Dinah is taking, as she comes closer and closer to being her truest self possible. We see it in her fighting skills certainly, as Fletcher and Guerra choreograph a beautiful two panel-tier fight scene (that’s barely a fight at all) between Dinah and a carjacker. We see it in how she’s opening up to her band, taking more responsibility, especially for the young girl — is she really? — who is partially responsible for the gift of her voice.

Like regular series artist Annie Wu, Pia Guerra is giving the book this beautiful simplicity of line that lets every character’s movement across panels come through without weight or drag. Ditto’s faces throughout are so touching and funny, a stark difference from Amanda Waller and Dinah’s own “Fuck it” expressions or Bo’s eye roll behind the sunglasses (you know she does) at times, that it really speaks so much to how many different types of women we are getting exposed to in a single comic. There is no template here, from either artist or writer. Just genuinely and deeply thought out characters. And having Loughridge’s soft, nearly pastel palette cascading across the issue just ties everything up in a perfect cinematic bow.

There is so much about this book that’s honoring who Black Canary is and has been since her creation in 1947. Rising to be the ultimate martial artist in the DCU. Her mothering instinct. And yet we still get this new facet to her personality — her Beatrix Kiddo-ness, if you will — that just encapsulates so much of who she can be at her height. She is defender and aggressor, friend and deadly foe, someone not to cross and someone to trust with your life.

Fletcher and company have developed something exceptional with this title and I implore anyone who loves kick-ass women, action, a sense of mystery, and the most gorgeous (and distinctive) art that could be gracing a comic, to jump in with both feet. Black Canary #4 is a great place to start too, because trust me, once you read this, you’ll be hitting the road back to grab #1-3 and pre-ordering the rest. This is a title we want in our pull boxes for a long time to come.