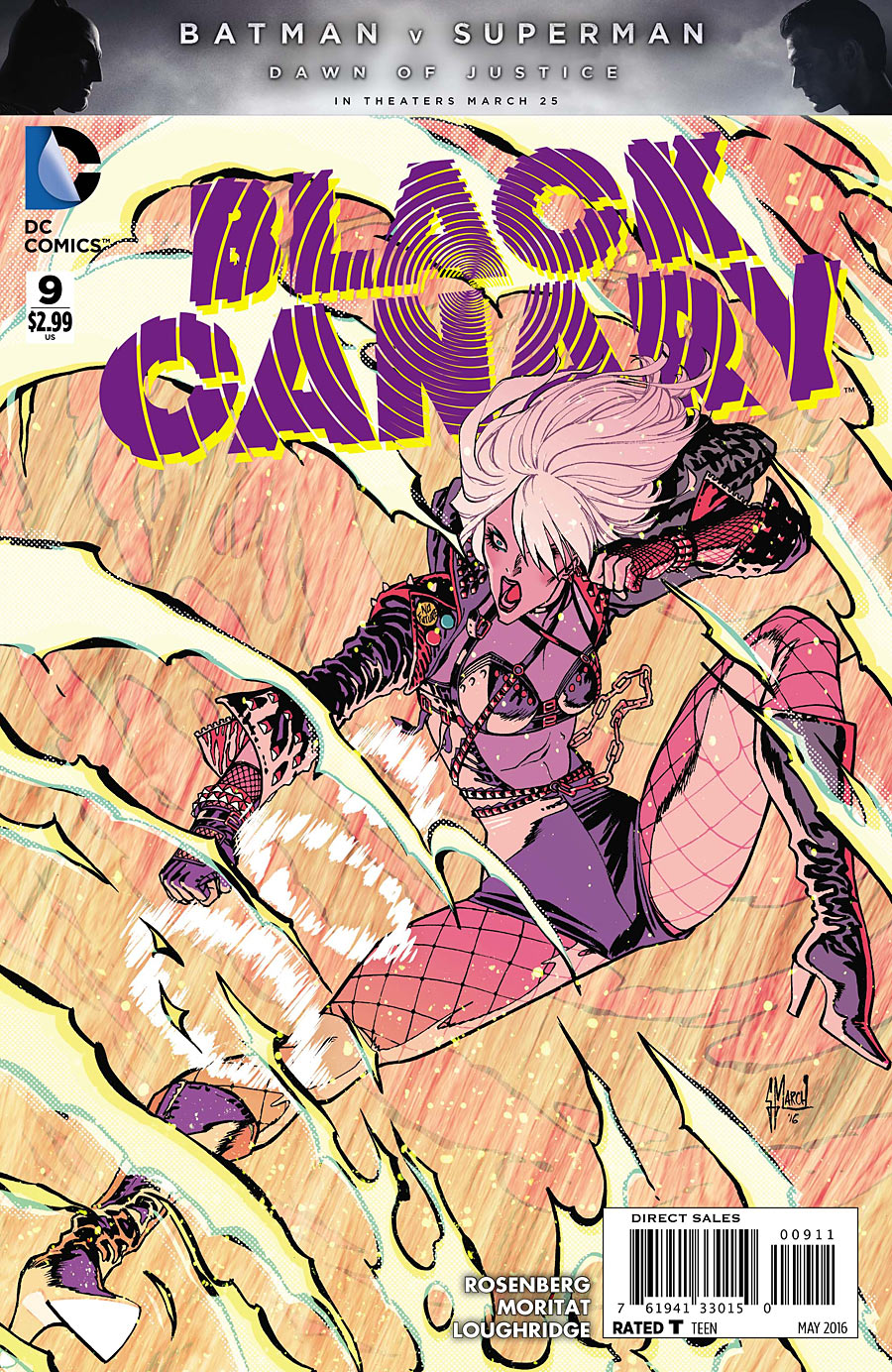 The main story of Black Canary gets paused this month for a deep cut going back to Black Canary’s early days as a band from the guest team of Matthew Rosenberg and Moritat.

Dinah and company, long before Ditto’s true nature or even her own background were revealed to the group, find themselves stuck playing the gig from hell at a time when the violence that dogged their shows put them in a position where they had to remove the word “no” from their collective vocabularies.

They arrive to discover that it’s a private gig for a very rich teenage girl, who is as exuberant a fan of them as her mother is intolerable. The dynamic at first makes Dinah look like the jerk for continuously saying “money” through gritted teeth in the lead in to the little girl repeating how Byron talks about the importance of connecting with fans, but the closer they get to showtime, the more it appears that the promise of a payday is all the band has going for them. First there’s a prominent gangster in attendance. Then the mother reveals that they’re part of the Falcone crime family. Then the entire Gotham underworld including Roman Sionis and Professor Pyg show up.

The more it drags on the funnier it gets, but there’s an undercurrent of true pathos that reflects several harsh truths about the reality of contemporary New York City. It’s hardly surprising that a writer who came to prominence through Black Mask Studios, founded to publish the Occupy Comics anthology, would weave together a story concerned primarily with the collision of class and commercial art, but what makes it really sing is how he lets those themes simmer. The dynamic of a struggling indie band being bought outright for the night for a private show would have played just as well in Giuliani’s New York as it would in Bloomberg or De Blasio’s, but with skyrocketing inequality and a shifting landscape that has segregated the city by class to a degree unseen in recent memory, it reads as particularly fraught.

What put me in the New York frame of mind while reading this issue, beyond Rosenberg’s deep roots there, was a post contextualizing the relevant era of the Fantastic Four in Giuliani’s time as mayor and the particularly disturbing confluence of Ben Grimm being compared to NYPD Blue character Andy Sipowicz, best known for being racist and violent in a similar timeframe to an actual NYPD officer shouting “It’s Giuliani time!”a corruption of Grimm’s “It’s clobberin’ time!” at the victim of an ensuing incident of police brutality. There’s nothing quite as gruesome in this issue, but the attitudes on display from the hosts of event, even before they’re revealed to be an organized crime family, easily call to mind former mayor Bloomberg’s views on the city presented in a speech from 2003.

“If New York City is a business, it isn’t Wal-Mart — it isn’t trying to be the lowest-priced product in the market. It’s a high end product, maybe even a luxury product. New York offers tremendous value, but only for those companies able to capitalize on it.” It isn’t about supporting the arts or creating and cultivating spaces that produce great art, it’s about commodification and nurturing a playground for the wealthy which is clearly on display as Black Canary is ordered up and flung out with a refusal to pay. It serves as an ugly mirror of the racist abuse central to the origin of one of the Harley Gang members in Conner and Palmiotti’s Harley Quinn, a young woman forced to contend with rich white customers at her family’s Indian restaurant who refuse to pay for food on the grounds of being too spicy. Rosenberg is a particularly exciting and welcome new voice at DC because he brings with him a keen understanding of the real world pressures brought out in the most cohesive vision of Gotham since the line-wide No Man’s Land event. This is very recognizably the same city we’ve been seeing over the last year in Batman, Batgirl, and We Are Robin.

It’s an issue that also owns the full scope of punk’s relationship with New York from the romantic image of a rough and tumble band struggling from gig to gig to the ugly calculations that go into trying to make a go of it in commercial art. There’s whispers of the ethics of major bands playing private gigs for despots like the scrutiny that Beyonce and Mariah Carey were put under for playing in front of the late Gaddafi or the perpetual threat of Martin Shkreli scooping up exclusive ownership of the next great album, but the circumstances are far harsher than the already rich accepting large sums from the even richer, it’s about a system that forces struggling artists into exploitative situations. It’s a clever in joke to put Roman Sionis, alias Black Mask, in the crowd, but there’s no mistaking what Professor Pyg represents either.

Moritat is maybe even an easier choice for a Black Canary fill-in issue than Rosenberg because of how well his dynamic cartooning sits beside series regulars Annie Wu, Pia Guerra, and Sandy Jarrell, but he’s also particularly suited to the key Rosenberg is playing in. There’s an anachronistic edge that Moritat brings to the setting and hosts that puts the band completely out of place in a way that highlights the culture clash between them and further sharpens the edge of the dynamics in play. The club is decked out in a cheap tiki decor, a cheap copy of a different time and place, misappropriated symbols of colonial conquest recycled long past the expiry of their original meaning. The overall effect is a band that would have played CBGB doing a gig for an audience whose cultural reference points begin and end at Chinatown and Casablanca.

What truly pulls the issue together as being cleanly and clearly a part of the series’ overall look and feel are colorist Lee Loughridge and letterer Steve Wands, who as of this issue are the only contributors to have been on every issue of the run. This being a single issue fill in, Loughridge steps back a bit from using his colors to carefully build up plot and character to provide embellishment and emphasis for the major story beats, but is no less idiosyncratic.

What Rosenberg and Moritat prove beyond a shadow of a doubt with this issue is that there’s a strength and vitality to Fletcher and Wu’s original vision that goes far beyond what the series has been able to explore so far.