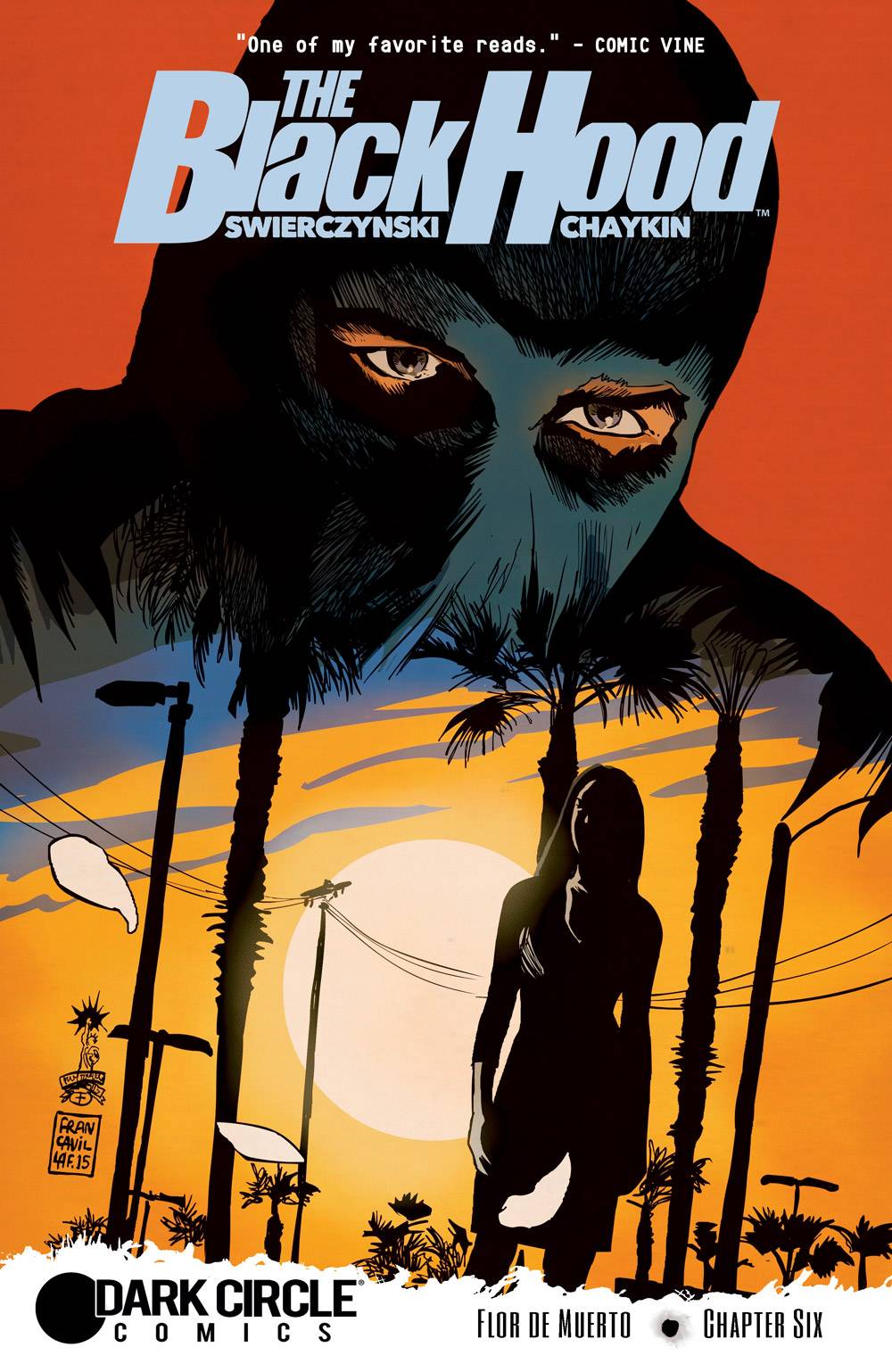 In the aftermath of his takedown in the first arc, Greg is recuperating in sunny California — at drug rehab. But it’s not all encounter sessions and therapy, as Greg almost immediately gets pulled into protecting a reformed drug dealer from her employers. Can even sand and surf be enough to keep the Black Hood at bay in Greg’s life?

Setting, more for The Black Hood than for any other book I’m currently reading, is desperately important. This book has Philadelphia coursing through its veins, imbuing the voice of the cast, the pacing, and even the page structure with the feeling of a dirty city — smaller than metropolises like New York and Chicago, but filled to the brim with corruption and violence. Philadelphia, more than Greg or Jessie, is the lead character in The Black Hood, and it makes for a truly gritty read.

So what happens when the Black Hood suddenly finds himself in LA, a city with its own fair history of crime? It makes for a very different story, that’s for sure. Los Angeles isn’t gritty. It isn’t anything but shiny. The corruption and violence are certainly there — congealed inside that candy shell of Hollywood, palm trees, and karma — but no one can see it. No one will believe it if the story’s too good.

And that is how Swierczynski structures this interlude of Greg’s drug rehab experience: by presenting the cliché of a Los Angeles damsel in distress and drawing this man in who is used to seeing things as they are, not as charades. Greg’s immediate desire to be the hero, to put on the mask, to save the girl, is a Hollywood movie. And how can he resist? When a blonde haired, blue-eyed femme fatale crosses your path, you jump. Sam Spade would. Jake Gittes would. And so, Greg does. But the Black Hood doesn’t have the LA street smarts that comes with patrolling Chinatown. And so, the story ends as only it can.

It’s a fairly simple plot, and if The Black Hood #6 were the start of a longer story arc, I might be less enthused by its sort of harsh jump from Philadelphia to LA-style storytelling. As an interlude, however, it feels right, like a kind of palette cleanser Swierczynski is providing before we dive back into the darkness in the next story arc.

No better choice could have been made for pencils and inks for the kind of atmosphere Swierczynski is going for than Howard Chaykin. Long associated with tales of utopian environments marred by underlying corruption (sound familiar?), Chaykin gives us a clean cut, but still unnerving, representation of Greg and the patients he encounters. The artist’s trademark thick outer ink is punctuated by tiny pencil details along jaw and smile lines, making every face seem impenetrable and fragile simultaneously. Greg has this extra layer of world-weariness, scarring aside, and it connects him to his roots, despite the brighter surroundings.

Where things feel a little forced is in body language and proportion, as both Greg and Elisa feel stiff and awkward in the space and with each other. It almost feel like their bodies are frozen mid-frame, but in a way that doesn’t feel fluid. The next step out of each panel would be a clumsy tumble that never happens. It’s a fair tradeoff for some of the benefits of Chaykin’s pencil work, but something that keeps me from falling too far into the narrative without notice.

An interesting exercise in taking one type of crime story and dropping it smack right down into another, The Black Hood #6 is intellectually curious, if not emotionally engaging. I’m pleased to see that an LA-style detective story can be curated to such a perfect degree, but for my money, I can’t wait to get back to Philly.