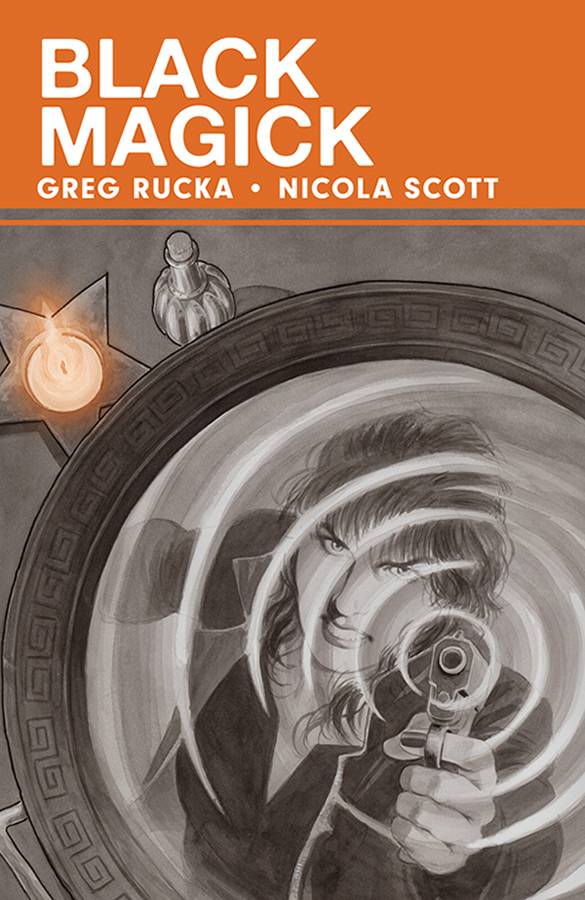 The story of Detective Rowan walking the line between police work and her personal life as a witch continues in this latest installment. The mystery of the man who knew her true identity, who she then proceeded to magically immolate at the beginning of the arc, deepens. The whole story hinges around finding out just who he is and why he targeted her.

As with many of Rucka’s independent series, this is not a series where you can jump in at any issue. The story, and the reader’s interest in it, hinges on the need to have read everything that has come before now. The positive strives from Nicola Scott’s artwork and Chiara Arena color work can only hold a book for so long. Since the first issue, this series has made it clear that when it comes to nudity, subject matter and character that there is no gender barrier or ceiling, all are fair use. The color treatment, with the every day in black and white and the magical and crime relevant objects being highlighted in color is also a constant. They are nothing unique to this specific issue. The only mystery they hold is perhaps in revealing if there is a difference between objects colored in red and those given green hues. As previously mentioned, these are series constants, not something unique, different or surprising to this issue. What we are left with are some quirky scenes where we get to know the people in Ro’s life a little bit better, but no shocking revelations.

There is plenty of action and violence in the last third of the story, as you would find with a weekly criminal drama on television. What made the story so initially intriguing has settled and everything else feels paced and more played down. Considering we are approaching the conclusion of the first arc none of these things should feel or be surprising. Yet, there is a lingering disappointment that Rucka and Scott didn’t have more up their sleeve. As a writer, he has been great with adding in surprises. Is this just a case of finally reading too much of his work that patterns are starting to show?

Hopefully not, and the rest of the arc plays out in spectacular fashion. The final moments, along with the back matter prequel story, leave plenty to salivate over.  However, it is very clear this is almost a calm before a storm. The slow twist of the top before it is released. The winding tension to crawl under your skin. However, instead of building that tension there is a lingering phrase that just keeps repeating, “So what?” It’s not a desired feeling after reading a book that has built itself up so strongly in such a short amount of time. No matter what, if you are new to the series, make sure you start at issue one, otherwise this feeling will be amplified.