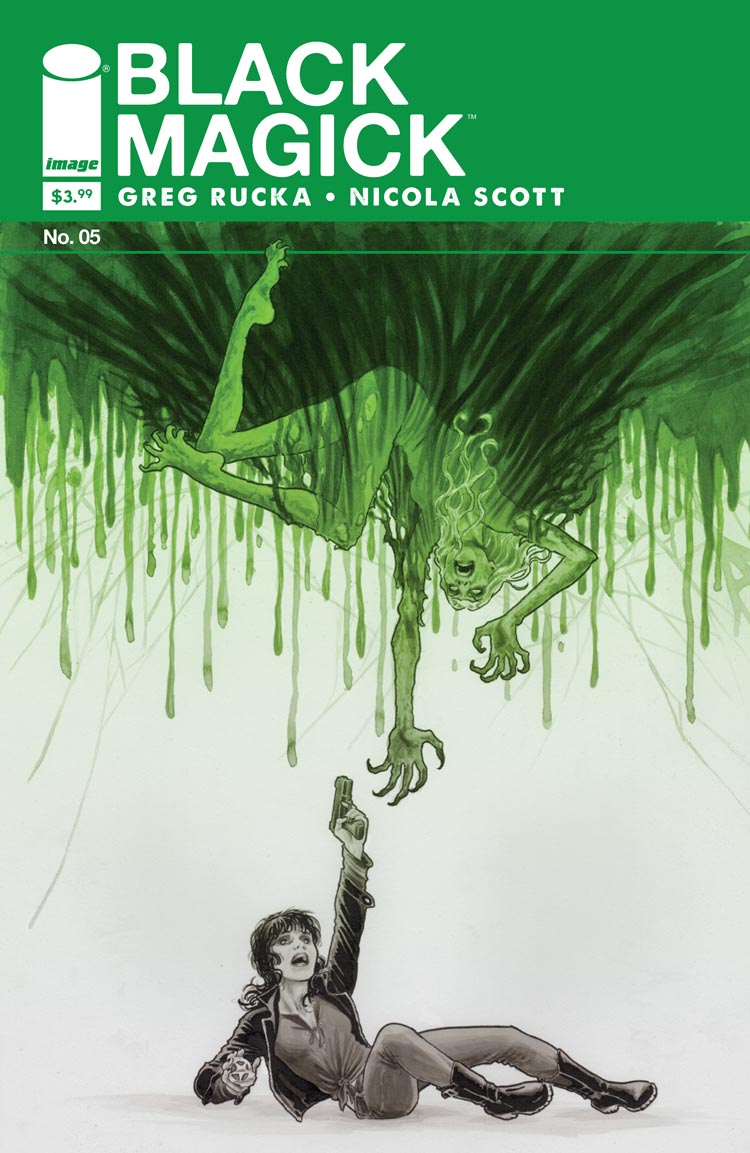 Rowan doesn’t know it yet, but things are about to get seriously dangerous for her — and it all starts with Alex’s supernatural doppelganger jumping out of a pool of water to kill her! Is this Aria looking to enact its policing on the witches of Portsmouth, or a new unknown threat?

Black Magick is one of those titles that seems to unfurl the longer you absentmindedly pick at it, until you realize that you’ve made a hole just large enough to see through. And what you see on the other side gets more frightening the longer you look at it. It’s something writer Greg Rucka has become a master at over the years, crafting unique women who land deeper in worlds of danger than they ever could have imagined — both physical and emotional. But seeing artist Nicola Scott bring that specific sensitivity to the page graphically is something to behold.

For instance, we see in Black Magick #5 — not to mention previous issues — this aesthetic of grey toned, hyper-realistic painting disrupted ever so subtly by the emergence of colour, as if it bled through the page from underneath. The moments Scott executes magic on the page, it’s as if there’s a sub-paper glow that can’t help but peek through the brushstrokes, and it’s a quality that ends up mirrored literally in the narrative Rucka and Scott have constructed together.

Doppelgangers fighting on another plane, underneath the water’s surface. Exceptional power cascading through relatively mundane objects like a lighter or, in Rowan’s case, her badge. Doors locked by magic. Even the idea of Morgan and Anna’s baby, hiding out inside the womb. It’s circles and circles of worlds within worlds that we start getting a peek of — and like the final two-page spread of this issue, it’s shocking what lies underneath.

Amid all of this layering upon layering, we have an absolutely stunning experience that revels in subtlety and whose quiet moments are as impactful as the ultra-violent. The looks gracing the faces of Rowan, Anna, and Morgan in this blissfully wonderful suburban scenario just underline what makes a book like this so special. It’s not that we feel an undercurrent of danger to an otherwise blissful scene. Or that we experience a lull in the action. No, this moment, this cherishing of friendship and palpable love for an unborn child IS the action, every bit as much as a tussle between witch and spirit. It’s as powerful as any other magick on the page.

It’s this level of craft that elevates a book like Black Magick above its peers in such a transcendent way. Every issue is an artifact of some kind of miracle that happens when writer meets artist and they make something better than the sum of their parts. Black Magick defies the physics of comic book artistry every bit as much as Rowan and Alex defy the physics of the material world. And that kind of miracle within a miracle is magick indeed.